Here is everything you need to know about Final Fantasy VII Advent Children: its single most emotionally-charged moment arrives about halfway through, when a key cast member is lost in battle and sinks into a watery grave. It's an event with blatant parallels to Aeris Gainsborough's death in the game which inspired the movie, and it offers a keen insight into the life of main character Cloud Strife.

In any other film, a character dropping his phone would be a throwaway moment, meriting a fleeting "oh crap" scowl before moving on to other more pressing matters. In FF7AC, though, Cloud's Panasonic FOMA is lovingly rendered and actually puts in more screen time (and plays a more pivotal role) than most of the returning FFVII cast. Its "death" is given more dramatic weight than anything else in the film, and as it sinks into oblivion it provides the only scrap of character development to be found in the entire production (in the form of a voice mail audio collage).

That's because FF7AC is, at heart, a movie about buying stuff. It was originally conceived not as a stand-alone work, but rather as the first product in a massive FFVII-themed merchandising package consisting of itself, a cell phone game (Before Crisis, which plays best on the Panasonic FOMA, don't you know), a vaporous PSP RPG (Crisis Core) and possibly the worst PS2 action game ever to be published outside of the Simple 2000 series (Dirge of Cerberus). 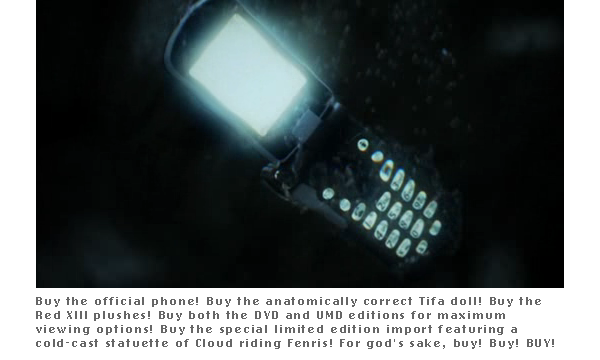 And that is why FF7AC is quite simply one of the worst movies ever made. Not because it's poorly written, or because it relies on inexplicable plot in place of involving story, or because the stiff animation falls painfully short of the detailed CG modeling on display, or because it's utterly boring despite being one of the most action-oriented movies ever made. Of course, all these things are factors, but what really pushes it over the edge is the sheer cynicism at the heart of its conception, the notion that fanservice alone should reign über alles.

Come to that, FF7AC even fails as fanservice, since the one shining virtue of its source material -- Cloud coming to terms with his failures and realizing that his friends and loved ones make life worth living -- is completely discarded. When the movie opens, Cloud's off sulking by himself because his skin problems are too advanced for even his dermatologist to resolve. (Of course, he leaves his cellphone -- Panasonic FOMA! Featuring iMode! -- active so his friends can worry about him, a desperate myspace emo-whore move if ever there was one.) Everyone wants to help him, but he cooly pushes them away. Hey -- just like at the start of FFVII. 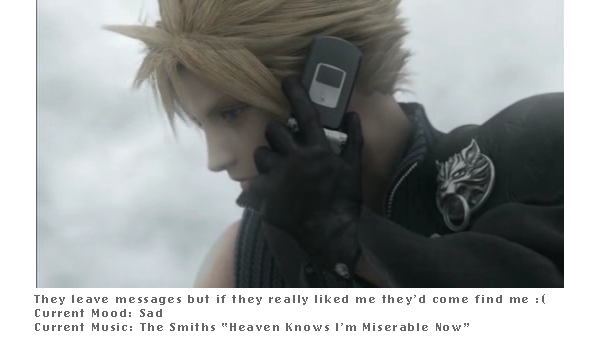 So over the course of the 90 minutes that comprise the purgatory that is FF7AC, Cloud learns to love, remembers how to smile and presumably shacks up with Tifa again. In other words, a straight-up rehash of FFVII's story. Oh, and it also manages to undo the game's decisive climax as well, casually bringing Sephiroth back to life through a series of plot contrivances never sullied by anything so trite as an explanation. 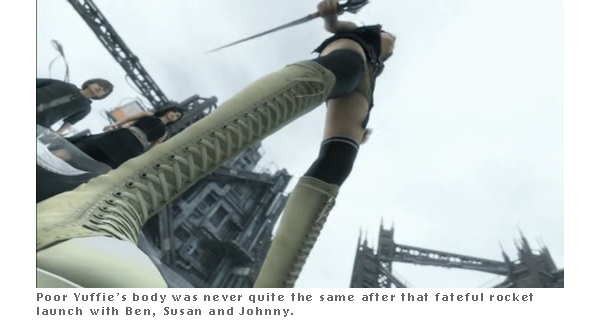 But with only 90 minutes' running time -- a good half of it devoted to empty violence -- the movie never offers a real payoff. Stuff happens, and lots of property gets blown up in the process, yet none of it actually matters because the consequences are never explained. Something bad will happen if the sulky leather boys get their way, apparently, but who cares? The movie does nothing to make a single character sympathetic (except maybe the kids who are forced to watch as the baddest of the leather boys talks about "Mother's mimetic legacy" -- the audience understands the blank looks on their faces all too well). Meanwhile, the writers carefully unravel any emotional investment that might have carried over from the game. That's Advent Children: 90 minutes of wailing heavy metal guitars and charcoal-grey fury, signifying nothing. 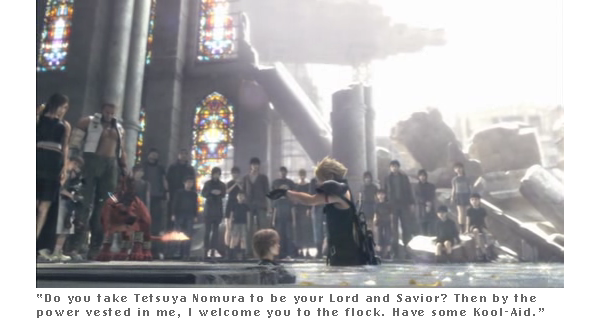