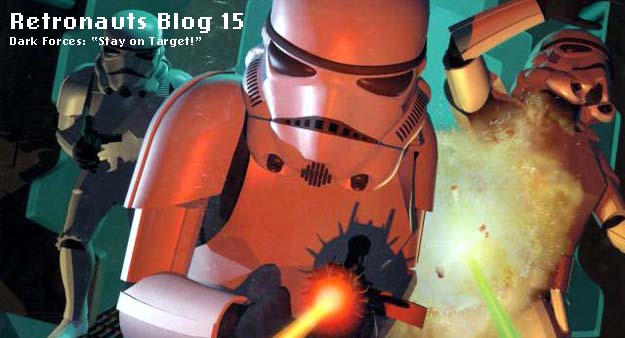 Dark Forces just might be the best Star Wars game ever. OK, maybe not the best, but it was pretty close. Maybe that's just nostalgia speaking? Or the fact that the competition for that particular title is so very very bad most of the time? Whatever, it's great. Or it was back in 1994, anyway.

Dark Forces has been on my mind a fair amount the past few days since I've been slugging my way through Doom for XBLA. This is actually the first time I've ever played Doom beyond the first episode for a variety of reasons. The most significant reason, though, is that I've been a Mac user lo these many years, and Mac users didn't get to play Doom until weirdly late. About 1996, if memory serves correctly. In fact, I think we may actually have gotten Doom II first.

Did I mention that Boot Camp is a wonderful thing? Right.

I was initially turned of by the concept of Doom; I'd played Faceball 2000 on my Super NES only to find it pokey and slow, and Pathways into Darkness confirmed my suspicion: the first-person perspective was sluggish and dull, and the prospect of that sort of game where all you did was kill refugees from bad heavy metal album cover art had zero appeal. Of course, I've since recanted on all counts; Faceball was genius, Pathways was brilliant and FPS games are pretty great. Forgive my youthful foolishness. For a week or so back then, I even thought Donkey Kong Country was good. We live and learn, gentle Internet. Even those of us reknown for our exquisite good taste.

Only one thing could change my mind about the FPS:

The power of childhood nostalgia.

Remember that brief snippet of time when Star Wars was actually cool? It started somewhere in the early '90s, right around the time Timothy Zahn's Thrawn trilogy came out, or maybe when the Dark Empire comics arrived. Millions of budding manchildren suddenly remembered their childhood, the fake lightsaber fights and the action figures and trying to talk like Darth Vader with our prepubescent voices. Rumors of a prequel trilogy gained steam. And for a little while -- until we actually watched the prequels, basically -- Star Wars really seemed like the mythical, dewy-eyed-Joseph-Campbell-would-be-so-proud opus Lucas longed to create until he discovered it was much easier to simply settle for lots of ancillary licensing instead.

Dark Forces arrived smack-dab in the midst of this little renaissance, and like several of Lucasfilm Games' other works of the time -- well, actually, everything they produced -- it was excellent. In retrospect, it's still pretty great, made perhaps a little more endearing due to the fact that it was one of the company's last classic creations.

I mean, look at that art. It's like shooting your way through a SCUMM game, with less pointing and clicking and more Stormtroopers screaming in agony. And a really bad Vader impersonator. But we'll let that slide, because cutscenes were absolutely not the point of Dark Forces. No, this game was about delicious mayhem within the comfortable confines of the Star Wars universe.

Of course, like all Star Wars games that aspire to be something besides a clumsy retelling of the films, Dark Forces had to work outside the actual plot of the films. In this case, the dev team took a fairly elegant approach by casting players in the role of some unknown mercenary named Kyle Katarn and framing the opening mission as a sort of prelude to Episode IV. Then they veered into entirely new territory that touched upon familiar characters and settings without feeling entirely like a rehash. So there was a icy world, but it wasn't Hoth; there was an encounter with Jabba, but it wasn't on Tatooine. All in all, a pretty classy affair.

The game begins with Katarn sneaking into an Imperial base which just happens to house the plans for the Death Star. In a classic case of bureaucratic failure, this essential facility is lightly-guarded, and it's a cinch to snag the plans and pass them along to the Rebels. There they inevitably end up deep within the bowels of R2-D2, but the game presumes enough familiarity with the films not to beat you over the head with that fact.

Katarn mercs his way through a string of self-contained missions for the Rebellion, eventually stumbling upon an ultra-classified Imperial project called the Dark Trooper -- a super-beefy stormtrooper augmented by the Force or cybernetics or something. In any case, they're way more impressive than your usual trooper, who here serve the role of cannon fodder. Elite clones my butt.

Oh, and speaking of all things Fett, Boba stands in as a boss midway through the adventure and goes down, once again, like a punk. So in that sense Dark Forces is pretty faithful to the films.

In terms of gameplay, Dark Forces was pretty much the hottest FPS on the market at the time of its release. Rumor has it that the game was created in response to the proliferation of Star Wars-themed Doom WADs, but this was no half-hearted effort. Although the graphics were still that pre-Quake 2.5D fakery, Dark Forces' engine was considerably more sophisticated than Doom's -- or even the runner-up, Bungie's Marathon. Height was an actual element of play that went far beyond simply providing a physical impediment as in Doom; you could actually look up and down to aim. Some missions were even built vertically, an impossibility in its peers.

The shooting action was dumbed down slightly to appeal to a broad audience who might otherwise find the no-frills design of the FPS genre ("kill everything that moves") too violent otherwise. It certainly suckered me. The over-the-top gore of competing games was sanitized to fit in with Lucas' shiny happy vision of the long-time-ago-far-far-away past, and aim correction was added. Ever wonder why stormtroopers are such crappy shots in the movies while the heroes always hit their mark? It's because the good guys can't miss. Their energy bolts actually bend through space to score, while the bad guys mill around in confusion wondering why their weapons don't do the same.

Special mention should be made of Kyle Katarn, who -- in this adventure, anyway -- managed to avoid the trap that most "extended universe" Star Wars characters fall into. Which is to say, he wasn't a stupid, cheesy, boring, annoying jerk. His design was decent, and his voice actor struck a good balance between wittiness and fallibility. That all sort of went to hell when they decided to make him a Jedi Knight, but in this game at least he was a very straightforward dude who did a fine job of blowing everyone who stood in his way into pieces without being excessively cocky about it.

So is Dark Forces a perfect game? Nah, not by any means. The auto-aim feature made things a little too simplistic, and despite the technological upgrades it was still very much a Doom clone at heart. Not to mention the fact that you couldn't save the game in-mission -- not even a temporary save to be resumed later. Oh, and it dabbled in verboten territory by featuring a jump button and some tricky platform sections in which to use it. As for multiplayer... uh, well, there was no multiplayer at all.

But the Star Wars trappings and generally slick presentation made Dark Forces incredibly compelling as a sort of My First FPS experience, and likely not just for me. I even learned about the art of modding through custom fan-made levels, none of which were especially good but which were interesting simply for extending the life of the game a little. And letting you kill Captain Picard from time to time. There's even a devoted Dark Forces fan community out there (albeit one shrinking through attrition).

Even with its flaws and aged looks and dated gameplay, Dark Forces was the most immersive Star Wars game of its era. It's still among the best. And all without a single AT-AT.