Hey guys, the first 1UP Retronauts podcast is now online. You should listen to it, because we talk a lot about...

I'm not sure if it's strictly proper for me to do a retrospective on a game I've never really played, but what the hey. I wouldn't be the first game journalist to review a game without having played it -- and I've at least had the decency to finish the startlingly faithful DS remake, so that puts me one-up on those dudes who get caught red-handed reviewing an MMO after two hours of play.

I've decided to make it a policy to preface any coverage of FFIII with the small warning that no, this is not the totally sweet Super NES RPG you played a few years back. Yes, that was called Final Fantasy III as well, but due to Square's super awesome policy of only translating half of its 8- and 16-bit FF titles back in the day the game we called FFIII was actually FFVI. Most of you know this now, but as I mentioned on the podcast I still hear people making this mistake.

Remember, not everyone is as big a nerd as you are. Honestly, I think a lot of the assumptive leaps made by the gaming press could be avoided if they'd keep in mind the fact that they're so much dorkier than the average bear. Yes, even you, Tommy Tallarico. Especially you.

As a matter of fact, I was talking to Square Enix's FFIII rep yesterday and asked her if she has a hard time dealing with the confusion caused by the weird inconsistencies caused by the company's (welcome, albeit occasionally bewildering) efforts to restore the series' proper numbering with current releases. She gave a sort of exasperated half-laugh and admitted that they have a big chart on the wall to explain the correlations and connections of the series' U.S. naming entanglements. So don't feel bad if you find the whole thing to be one gigantic mess. Because, in fact, it is.

No! Final Fantasy III is the NES game that never came to the U.S. Which I guess would make it technically a Famicom game. Yeah.

FFIII's big deal is that it introduced the Job system. The original Final Fantasy had classes, of course, which were mostly ripped straight from the headlines of Gary Gygax. But aside from a bit of rat-tail chicanery, your FF dudes were set in the job selected at the adventure's outset. Not so with FFIII! Your party of four generic dudes started out as "Onion Knights," which means "useless warriors with no distinguishing features besides a really stupid class name."

At the end of the first dungeon, though, everyone was granted the ability to change freely between the basic FFI classes at any time. So if you wanted to do the all-white-mage party thing only to realize that it's a completely horrible idea a few really difficult battles later, you could swap your characters around to be more combat-capable. The only limitation were the job change points that had to be earned in combat; to switch classes, you had to "spend" the party's collective pool of points. The more dramatic your job change, the more points you had to spend. So: monk to knight, pretty cheap; white mage to dark knight, not so cheap.

Later in the game, you'd acquire more sophisticated job classes. Some of these were pretty useless, but ultimately they were less useless than the base classes, which were the Final Fantasy equivalent of training wheels.

The Scholar and Bard, however, were never ever useful under any circumstances. That means the fact that you were forced to use a Scholar in one particularly tricky battle was the game's way of making fun of you.

Geomancers are pretty useless, too, but in the DS game they kind of resemble Ice Man. So that's OK.

If Final Fantasy IV was the first real FF game -- and it was! -- FFIII was a crucial step in getting there. Think of FFIV as a novel; that would make FFI the rough outline, FFII a really terrible initial story treatment that was quickly scrapped, and FFIII the first draft. In that sense, it's not as well-developed as FFIV in most regards, although it's arguably more robust as a pure RPG experience since you have total control over the skills and features of you current party while FFIV is limited at every turn by the dictates of plot. And bards are just as useless in IV as in III, but III doesn't force you to use one. Advantage: FFIII.

But then, FFIV has in-dungeon save points. Advantage: FFIV -- with a vengeance. 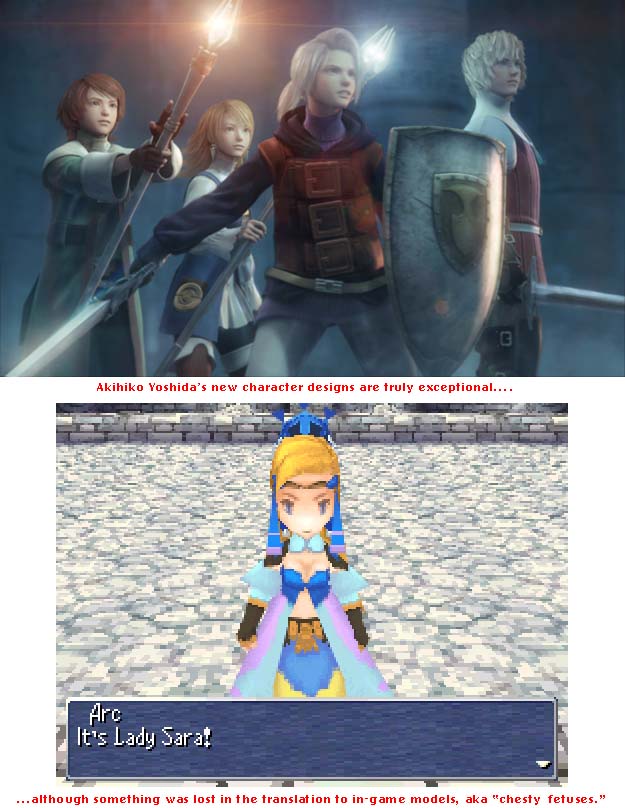 As mentioned in the podcast, the main reason we never got FFIII in its original form is because Nintendo was so slow in translating the original Final Fantasy. Released in Japan 1987, the game didn't make its way over here until 1990 -- by which point two sequels had been released for Famicom. And given a choice between localizing the craptacular FFII for 1991 or the superlative FFIV, Square wisely went with the better game.

Had the original made it over here in a more timely fashion, though, there might never have been a numbering game; FFII underwent a very rough sort of localization and very nearly saw release in the U.S. It's probably just as well. If kids had played that back in the day, they probably would have associated the name "Final Fantasy" with "human suffering," killing the series outright.

Of course, Zelda had a pretty jank-o-riffic NES sequel, and you kids still think that series is the bee's gol-durned knees. So maybe everyone would still be buying crappy FFVII spin-offs and queuing up to snarl about FFXII's Gambit System even if the series had been released all in sequence. And then people like me would also be spared the trouble of having to disambiguate which FFIII is which.