Like its predecessor, Welcome to the N.H.K. Vol. 2 is a study in cognitive dissonance. Except even more so!

See, I tend not to buy manga rated "18+" because, like most video games designated "M," the 18+ is usually a bit of a lie -- they may be marked as being for "older readers," but only those older readers with minds and emotions firmly rooted in adolescence. People whose idea of "mature content" means the constant juvenile fanservice shows nipples instead of simply hinting at them. Like mainstream American comic books, this sort of manga caters toward the boys who never quite grew up but still like to imagine that they did, and who prove their adulthood by demanding their favorite junior high escapism "grow up," too. Typically, this is achieved by adding a little more brutal violence and being a lot more overt in their misogyny. Women are scary when you never stopped being a boy, so best to put them in their proper place. 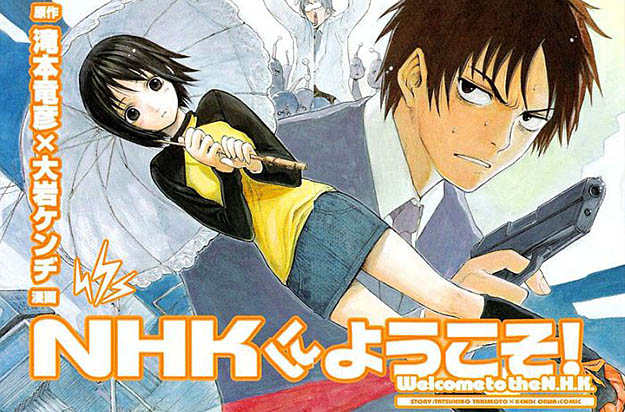 That 18+ rating is where Welcome to the N.H.K. is such a conundrum -- it's loaded with gratuitous content, but it lacks the usual smutty aftertaste. The series' second volume begins with main character Satou (who in volume one demonstrated the virtue of his character by getting stoned and stalking elementary school girls) laboring over the script to his pornographic PC game. Later, a few pages of the book are devoted to showing Misaki, Satou's cute-but-mysterious benefactor of sorts, splayed naked in Satou's mind as part of a series of increasingly determined rape fantasies. Nothing graphic is shown, but the situation alone should be enough to cause any decent person to discard the book and write to Congress: the hero of the story contemplating sexual assault, with visual aids. That's usually the point where a protagonist becomes the antagonist and any hope the author had of creating a sympathetic character would be thrown right out the window.

Except that's not really the case here. For one thing, Satou isn't really meant to be entirely sympathetic; he's help aloft as a paragon of everything wrong with the otaku section of the population. He's a friendless shut-in who can't hold down a job, and the closest thing he's ever known to romance is a silent, unrequited crush on a gloomy, drug-addicted girl a year older than himself. N.H.K.'s questionable content exists not to titillate but rather to paint an accurately bleak picture of Satou's emotional life, and as a contrast with his actions: When faced with the opportunity to actually kiss Misaki in real life, of her own free will, he simply freezes up to the point that she freaks out and beats a hasty retreat. 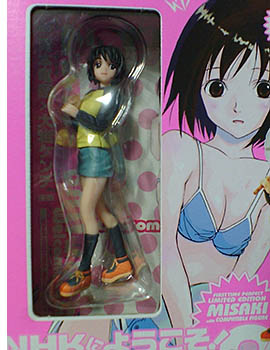 One gets the impression that N.H.K. is the manga equivalent of a public service message, a brutally frank mirror intended to confront its fanboy audience with the stark reality of how pathetic they are. (Admittedly, the fact that there are N.H.K.-licensed PVC figurines of the female cast does rather strain this theory.) Satou is pretty much the definition of pathetic -- and while his worst ideas are rarely his own, that still doesn't speak too highly of him. It just means he's spineless, is easily influenced by peer pressure and has morals with about as much rigidity as a rubber pica pole. The series all but screams You should not be like this person! Except that you already are!

But the thing is, Satou isn't really any more screwed up than anyone else; the people who want to "fix" him are just as lost and hopeless as he is. His sempai, the object of his unrequited affection, is a stumbling workaholic who compulsively pops pills to make it through the day and who would rather be dead than face an unhappy future. His pal Yamazaki, the guy who talked him into starting up the porn game development studio, rants and raves about the evils of women and encourages Satou to objectify and violate Misaki, but eagerly scurries along to meet up with the girl he has the hots for at the drop of a hat. And it's even clear that not all is well with Misaki, either, although the nature of her damage isn't entirely clear. She's clearly obsessed with Satou, but obviously not for his winning personality -- so either she's attracted to losers, or she has a bizarre "fixer-upper" mentality about emotional cripples, or something inexplicably worse. Who knows! And then there's the suicide club....

So maybe Welcome to the N.H.K. isn't really so much of an adminition of otaku culture as it initially seems. Maybe the point is that basement-dwelling shut-ins are no worse off than "normal" people, so keep right on buying posters of scantily-clad 12-year-olds. Keep building that collection of naked PVC girls. Get to know your naughty DVDs a little too well.

Who knows. I'm not really sure where Welcome to the N.H.K. is going, but I suspect it's inexorably downward. And that's what makes it so compelling -- there may be no happy ending for this one (in any sense of the phrase). And even if there is, the path to get there will be absolutely harrowing, making for a painful read. Yeah. Hurts so good. 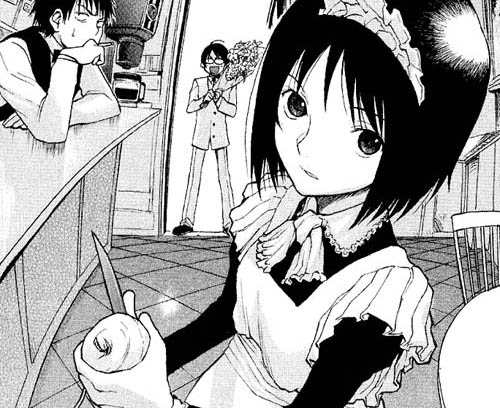