The handicapped have it tough, to say the least. Not only are they physically limited in some way, but they're constantly the brunt of cruel jokes in our unfair society. Yet every now and then, a movie comes along that tells the story of someone who overcomes the odds and changes his fate despite his disabilities. In the end, movies like this show us the power of the will in the face of adversity, and that the human spirit is far more powerful than the body.

This is not one of those movies.

The Crippled Masters, without question, is a mess. But it's an amazing mess that combines disabilities with martial arts and a storyline that doesn't make any damn sense at all.

(The names of people and places have been changed to protect the innocent.)

The Crippled Masters is the tale of Nubs, who gets his arms cut off for reasons which are never explained and finds himself cast out of his temple as supreme punishment. Orange-Shirt gives the "disarmament" order, but is himself ordered to banish Nubs. (This is an important plot point. Remember it.) Maybe it's because his left arm didn't get "cut" off completely, leaving behind a bizarre stub that resembles a baby's foot. This story is also about Legs, but we'll get to him shortly. Regardless, Nubs is cast out. Armless, he wanders the streets of CityTown with blood soaking his nice gi. 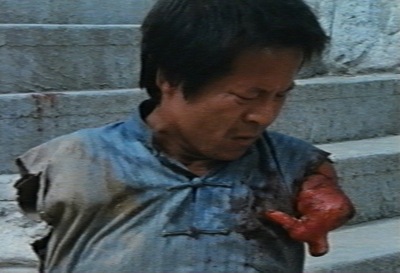 A distinguished career of karate-chopping screeches to a halt.

After Nubs is thrown out, we see a brief exchange between Orange-Shirt and a man who has a horrible face abnormality. We'll call him Master Scar. Master Scar congratulates Orange-Shirt on a job well done, disposing of Nubs like that. Orange-Shirt seems uneasy, but when Master Scar proposes a toast, they both drink.

Realizing that he has no arms, Nubs does the only logical thing. No, not dressing his wounds, or even cleaning blood from them. No, he goes to get lunch at a placed called Restaurant. Now, the owner of Restaurant isn't too keen on this idea, so he tells Waiter to kick the maimed, blood-drenched man out of the building. Waiter decides that the best way to get rid of him is to place a plate of chicken in front of him and to take the scrumptious morsel of deliciousness away like one would do to your drunk buddy. Waiter lures Nubs to the floor where he proceeds to humiliate him in front of all the other patrons. In retaliation, Nubs bites Waiter in the leg. He bites him until it bleeds. Screaming in agony, Waiter gets the attention to Restaurant's bouncer figure, Fatso. Being heavier than Nubs proves to be an advantage, as Fatso beats the living crap out of Nubs until he passes out. (In fairness, having two arms was probably gave Fatso the upper hand as well. So to speak.) 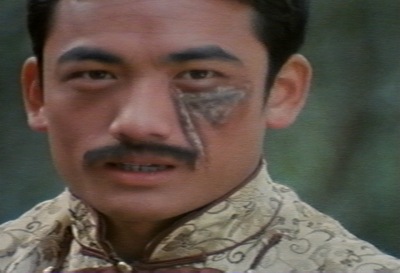 He should really see a doctor about that...

Nubs regains consciousness in the care of Old Dude. Old Dude informs Nubs that he was picked up with all the dead bodies, and it's a miracle that he was discovered to be, in fact, alive. You see, Old Dude makes coffins for the residents and surrounding businesses of CityTown, and therefore must collect the dead bodies to place in them. Which is why from here on out we will call Old Dude "Coffins." Suddenly, a group of men interrupt Nubs and Coffins' lovely conversation by demanding coffins for the temple. Imagine their surprise when they recognize the guy with no arms as the same guy with no arms they had just banished from their lovely temple. "Kill the bastard" the leader says to his two esteemed colleagues, White and Black. (Note: these names have not been changed.) So Nubs once again gets his ass handed to him while Coffins becomes collateral damage. After this despicable display of hate, Coffins urges Nubs to run away. 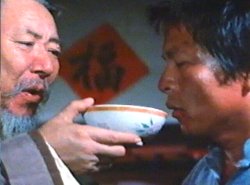 So away Nubs runs. And runs and runs and runs. (It is very fortunate in hindsight that Orange-Shirt did not also dismember his legs.) After all that running, Nubs realizes that he is thirsty, so he stops by a river to sip some of the refreshing water. He goes to reach for some water, but lacking arms to reach with or hands to cup with, he decides to stand on the rocks and lean in to get a sip. Animals do it all the time, by god! Why can't Nubs?

Nubs can't do it because that's not how humans were made, and he promptly falls into the raging rapids. Tragedy compounds: Unable to grasp anything with his missing limbs, he's quickly taken downstream.

After his little swim, Nubs gets washed up onto a shore somewhere. Glancing around, he sees a broken bowl with, wait, what's that? Could it be a few grains of rice? It is! Thank the heavens. After crawling over to what is surely a gift from God, Nubs partakes but is quickly fended off by a dog's bark. Consistently down on his luck, Nubs is pretty much hit the rock-bottom of humanity, which is why he can actually consider stumbling into a pigsty to be a lucky break.

"Pigs have to eat something," Nubs surely thinks to himself as he jumps into their home and then proceeds to stuff his face on pig food, "so why can't I?" But the feast is short-lived as Villager enters the scene and promptly freaks out at the strange no-armed man eating his livestock's food.

The following is a verbatim account of the conversation that follows.

After this exciting dialogue, we enter a montage of Nubs joining the residents of Village Town in their daily routine, including farming and hackey-sack; he's also found a use for his nub! It seems like life is finally looking up for Nubs. 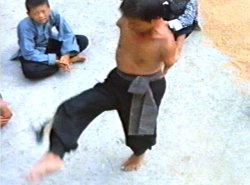 Will Nubs' luck hold? Will he live happily ever after without a thought of revenge? And what about Orange-Shirt? Didn't I mention he'd be important?

Stay tuned for next time where some of those questions will be answered and more will arise.