Media | Anime Releases | September 25, 2007: Man, do I ever need to shut up. This week is a massive, massive release flurry, with a high level of crappy material. Prepared with the assistance of The Digital Bits and cover art courtesy of Amazon.

Haruhi Suzumiya, Vol. 3 | The Third, Vol. 3 | Ergo Proxy, Vol. 6
This is one of those "wow" weeks in which a smorgasbord of quality titles have managed to sneak their way onto shelves to stand alongside the crap. Tekkon Kinkreet would have made its way onto this list save for the small fact that its also one of those rare and precious high-definition anime releases. So, this weeks selections are The Third Volume 3, The Melancholy of Haruhi Suzumiya Volume 3, and Ergo Proxy Volume 6. Its a shame that EP hasnt been released in true high-definition yet, since its one of the few series that has seen an HD release in Japan. 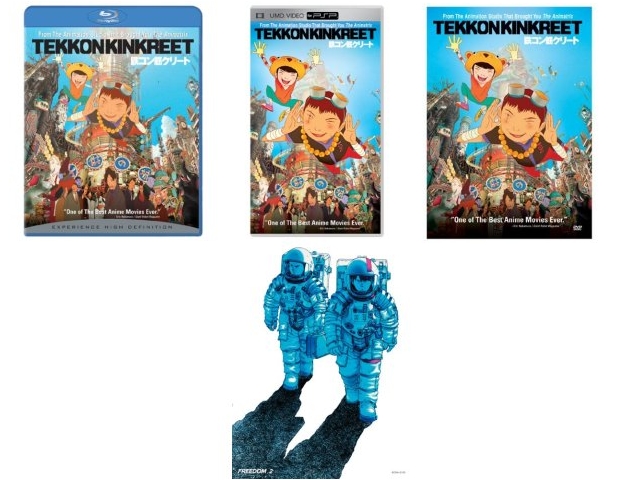 Tekkon Kinkreet | Freedom, Vol. 2
We have two high-def selections this week: Tekkon Kinkreet on Blu-ray (plus regular DVD and UMD) and Freedom, Vol. 2 as a dual DVD/HD-DVD release. Tekkons about a city full of gangsters, gamblers and other assorted malcontents, a place doomed to be razed unless two boys named Black and White can save it. As the winner of the Mainichi Film Awards Ōfuji Noburō Award -- a prize generally reserved for smaller production or independent titles -- it definitely deserves a look. Meanwhile, Freedom is an OAV series (remember those?) produced by Bandai Visual and Sunrise about a boy who makes his own vehicle to race in a moon colony, apparently a rare event. I havent watched the show, so I cant say anything about its quality. Hopefully it's better than the last show to have the same plot, Star Wars: Episode One. 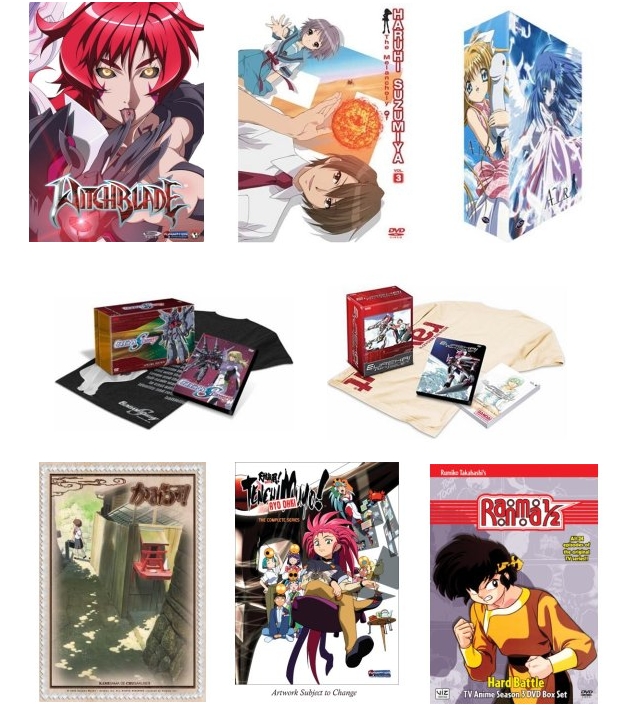 In addition to several regular boxsets, this week also see a few special edition releases. "Special" usually means they include a T-shirt or other goodies not included in the sanely-priced regular editions, and command a $5-10 premium. Regular box set releases this week are: Tenchi Muyo! Ryo-Ohki, Kamichu! Complete Collection and Ranma 1/2 Season 3: Hard Battle. Swag edition releases are: Melancholy of Haruhi Suzumiya Vol. 3 limited edition, Witchblade Starter Set (which contains volume 1), Eureka Seven, Vol. 9 limited edition, Gundam Seed: Destiny, Vol. 10 limited edition, and Air TV, Vol. 2. Whew. None of the boxsets are particularly tempting, and the swag editions are only interesting if you want a cheapo T-shirt to let the world know you like the anime of your choice a little too much. Otherwise, they're eminently skippable. A caveat: It's often difficult to find regular editions in brick-and-mortar shops the week that their swag editions come out.

Sturgeon is a very irritating man, especially this week. But not everything was bad, and there are at least a few rentals in the pile beyond the high-def selections and the weekly picks. Next week will likely be much of the same. Discuss it on the Forums!