Most classic games offered a greater challenge than games of today. Well, good classic games, anyway. It makes sense, really; amazing titles like Super Mario Bros. 3 simply didn't have the complexity -- not to mention the cartridge space -- to necessitate tutorials, giant flashing arrows, and/or a soothing robotic female voice to tell you that everything is going to be okay. True, difficult games could be annoying. But after launching your controller through inches of drywall you could at least dust yourself off, and give something like Castlevania III? a hearty handshake of respect.

On the other side of the "difficult" coin are games like Zelda II: The Adventure of Link. The ugly, terrible side. The side that seeks to punish the player with boredom at every possible moment. It may be an entry in one of gaming's finest series, but Zelda II is still a thorough ROM hack away from being a good game.

Take the concept of "lives" in video games, for example. It's an antiquated idea, and one that punishes the players of anything it poisons. You'd be hard-pressed to find a modern game that doles out a finite number of lives; most opt for the forgiving -- and yes, fun -- checkpoint system that makes tough games like Resident Evil 4? bearable. Of course, lives do have their place in fun, arcade-y romps, where losing one of your "dudes" simply means a few seconds' delay before the explosions start again.

Lives certainly don't have any place in a more substantial and involved adventure like Zelda II, but, well, there they are. 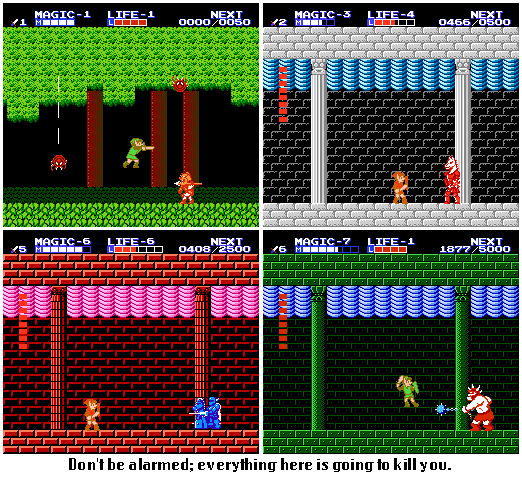 Is this mere grumbling? A pitiful symptom of being a "weaksauce" gamer? Not at all. Losing all of your lives in Zelda II is both inevitable and frequent; it's a tough game. Unfortunately, the game kicks you back to square one whenever all of your lives are lost. Getting wasted by Moblins in some late area of the game means you'll be sucked back to Zelda's solo slumber party, exactly where Link starts his journey -- and trudging back to where you last expired is about as fun as it sounds.

Simply put, rather than enticing you with rewards for playing well, the game instead threatens you with boredom if you should lose. There's nothing fun about being forced to retrace the same territory over and over again just because you mistimed a jump, but that's what happens when the simple arcade game mindset is awkwardly wrapped around an action-RPG like Zelda.

And curiously enough, the game borrows as heavily from the RPG genre as it does from the classic arcade. To date, Zelda II is the only entry in the entire series in which Link enhances his skills with experience points. And while this gives a greater sense of purpose to fighting hordes of enemies, this system, too, has its flaws. Inexplicably, some enemies don't even give up experience points when killed -- though it has nothing to do with how difficult said enemies are. It's almost as if the game designers realized that leveling up didn't take long enough, so instead of balancing the game, they randomly made some enemies absolutely worthless.

But the fun doesn't stop here: when Link loses all of his lives (there's that word again), he loses all the experience points he's gained towards reaching the next level. Look at the bright side; since you're going to be retracing your steps, you might as well grind for levels in the meantime! It could be worse, though -- in the Japanese version, all your stats (Attack, Magic, and Health) were reset to the lowest category when you restarted, forcing you to grind even more or lose massive amounts of proress. 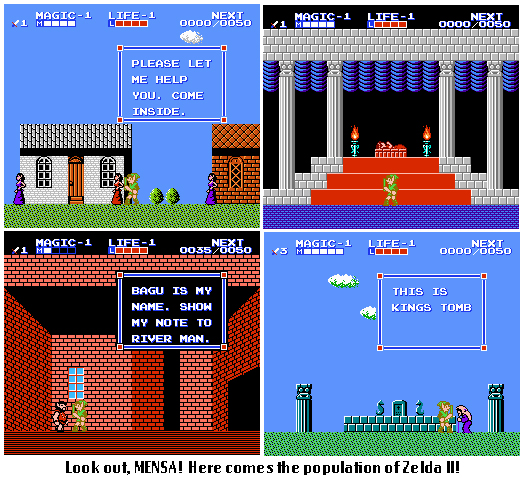 Despite these flaws, Zelda II actually does have some good qualities. If anything, it was an example of how far Nintendo games had come since Link's first adventure in 1986. This Link is no longer a midget, and his enemies are no longer approximations of octopi and dog-people; Zelda II's graphics portray a fully realized (for 1988, anyway) "grown-up" world -- and this grown-up quality is something that Zelda fans would whine about until the release of The Legend of Zelda: Twilight Princess, the very next adventure in which Link is an adult male for the entire game. Would this mark the end of "teh kiddie"? Only time will tell.

Link's sword skills also benefitted from a heck of a growth spurt after the first game. The sheer versatility of Zelda II's fighting system is admirable, and it wouldn't be matched until The Legend of Zelda: Ocarina of Time? a decade later. Most of Link's new moves are absolutely necessary to defeat the countless Iron Knuckles that swarm the many dungeons of the game. These particular enemies require a lot of strategy - and sometimes plenty of button-mashing -- to defeat.

(And their annoying and seemingly constant presence throughout Zelda II marks another flaw of the game. Who needs the steady increase in difficulty that the previous game exhibited when you can just introduce various elements of wildly varying difficulties from the outset? Pfft! Game design.)

Since we're back to the topic of Zelda II's failures, the music sucks, too. Whoever programmed the NES to warble out the tunes of Zelda II should be shoved in some manner.

But not too hard; the temple music is pretty sweet.

On its own merits, Zelda II is just no good. But how does it fare in 2007 as a Virtual Console game? Well, given the limited save state abilities of the Wii, at least one of the game's problems is less psychologically damaging. Even so, the game really isn't worth the trouble. Zelda II replaces the fun, sandbox-y quality of the first game with boredom and aggravation. The game certainly has its moments, but they ultimately don't make up for all of its pain. Purchasing Zelda II is kind of like getting a killer set of LEGOs -- that happens to have a dangerous wasp nesting in every other block.