Is there anything more radical than playing video pinball on the TurboGrafx-16?? "Rhythm Is a Dancer," you say? No way, man, Snap! is way played out. Hypercolor shirts? Whatevs, Fido Dido reams that crap. No, Devil's Crush is totally the baddest thing ever. Woo Satan!

In the halcyon age of the early '90s Johnny Turbo's mismanaged console somehow came into its own as...the master of the video pinball genre? Believe. For one thing, there was barely any competition worth mentioning, and the TG16 was blessed with not one but two of them: Alien Crush? and Devil's Crush. And these games were so wyckyd bad ass that they looked like the doodles in your eighth grade Social Studies binder, replete with skeleton knights and Sharkticons. 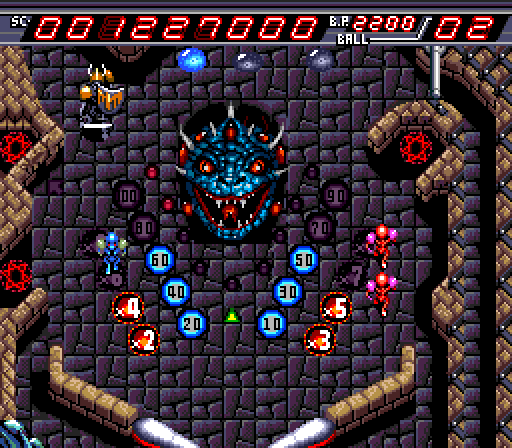 These games, inexpertly localized from the the similarly-named "Devil's Crash/Alien Crash" games on Japan's PC Engine, featured pinball in two of gamedom's favorite settings, namely sci-fi planets owning a crushing debtload to H.R. Giger, and Satanic dungeons. While Alien Crush is pretty crusty and holds up poorly these days, Devil's Crush remains one of the Turbo's all-time classics. It's ten billion times better than, say, Keith Courage in the Alpha Zone. Alien Crush is so bad its only about three billion times better than Keith, Toby or otherwise.

The first thing everyone notices about Devil's Crush is how much it resembles a Judas Priest album cover. This is a good thing as it sets your expectations for the next thing: Incredible music in a Castlevania style. Even better, it benefits from the added bonus of having the trademark Turbo sound, a sonic signature which alone is reason enough to buy every Turbo game available on Virtual Console. Some tracks even rawk out Judas style, like the bonus stage with the two reptilian spear men. It absolutely sounds like a three-necked guitar. Dude. 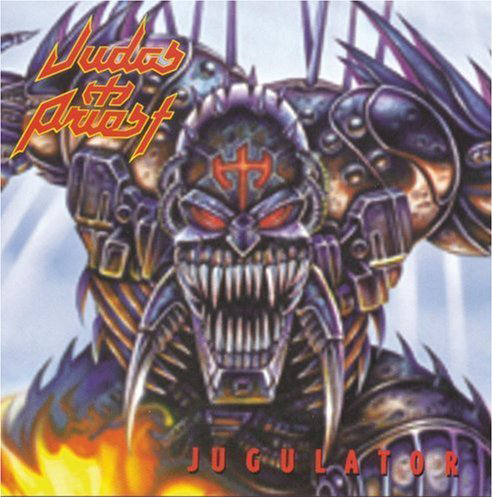 One of the benefits of video pinball versus its more pedestrian analog analogue is that the power of modern computing enables all manner of moving targets and boss-like encounters. You'll encounter several of these boss stages by opening up various portals on the board, the most famous of which is the sleeping barbarian woman who awakens to become a serpent. Once inside you have to destroy three skulls, which are also the seventh stage boss of Blazing Lazers. In fact, many of the sprites seem to be, ah, borrowed from other Turbo luminaries. The skeletons doing the endless march in the centre of the board look to be the very same as the ones in Dungeon Explorer?. 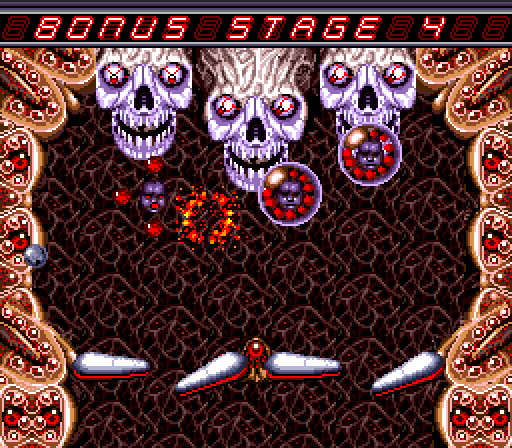 Devil's Crush also is unique among pinball games in that it offers a password feature. This lets you continue your game again on your grinding march towards the perfect score: 999,999,900. Once this milestone is reached, you will beat the game and see the ending, in which the woman in the centre is freed of her curse and becomes human once more. Strange as it may be to have a pinball game with something of a plot, it's certainly not unique in that regard anymore. Its story certainly trumped anything seen in its its predecessors, but other notable video pinball games such as Metroid Prime Pinball? and Sonic the Hedgehog Spinball? have upped the ante. Slightly. Devil's Crush's characters don't even have names, which is probably why fanfiction based on the game falls so desperately flat.

Not that a riveting narrative is anyone's motivation for playing freaking pinball, but, like, just sayin'. 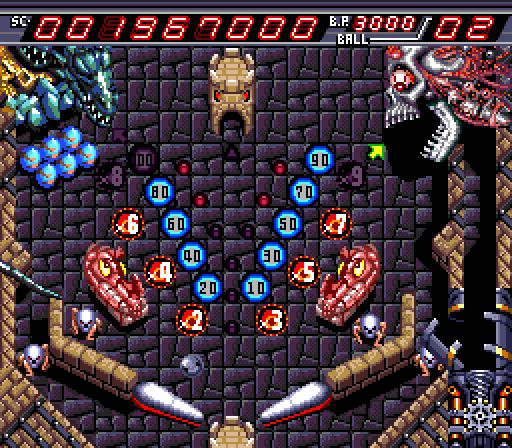 Put your balls in here. Come on. Do it.

Surprisingly, Virtual Console already plays host to a fair number of pinball sims, and Devil's Crush is an absolute steal at 600 points. It's far superior to Nintendo's lamentable NES Pinball and its own sibling, Alien Crush. Meanwhile, Genesis games start at 800 points, which makes Sonic Spinball steeply overpriced. Especially when taken into consideration that it's been released on a number of compilation discs that by now are so cheap a hobo wouldn't spit on them. So whip out your Crystal Pepsi, your Megadeth CDs, and your Bolshevik Revolution Duotangs; it's time to live again!