What could possibly be more fun than subverting expectations. And snarkiness! They're what this site was founded on. And it is in the spirit of the former that I would like to write about, yes, you've guessed it...Spike Jonze.

Spike Jonze, in case you don't know, was the acclaimed director of several iconic/ironic Beastie Boys and Weezer music videos, which were quite something in the '90s. He later segued into film with the 1999 feature Being John Malkovich, a movie written by Charlie Kaufman wherein John Cusack crawls into a metaphorical vagina which opens up into John Malkovich's head. The themes of identity and overall weirdness prevalent in the film were equally prominent in Jonze and Kaufman's next project, Adaptation.

Adaptation is about writer Charlie Kaufman's attempt to adapt a non-fiction book titled The Orchid Thief into a motion picture. The Orchid Thief is about New Yorker journalist Susan Orleans, who befriends the subject of her latest work, John Laroche. Laroche is a poacher on hunt for rare Ghost Orchids that grow in the middle of the swamp, and which may in fact be ficticious. Charlie has a difficult time with the project, as it is distinctly uncinematic -- ironically, the precise reason he tackled the project in the first place. Furthermore, he want to avoid typical character arcs or plot devices...indeed, any arcs at all. He doesn't want any of the characters to learn important life lessons, to better themselves, or have any conflict. Meanwhile his twin brother Donald is making a mint on his hackneyed serial killer thriller screenplay -- the sort of pulpy nonsense that Morgan Freeman might co-star in alongside Ashley Judd.

Donald suggests that Charlie goes to a screenwriting seminar by Robert McKee, played by professional scene-chewer Brian Cox. Charlie laments that he wants to write a screenplay that is true to (his) life: nothing happens and nobody changes. Brian Cox's ribald retort is, "Why the fuck are you wasting my two precious hours with your movie? I don't have any use for it. I don't have any bloody use for it." 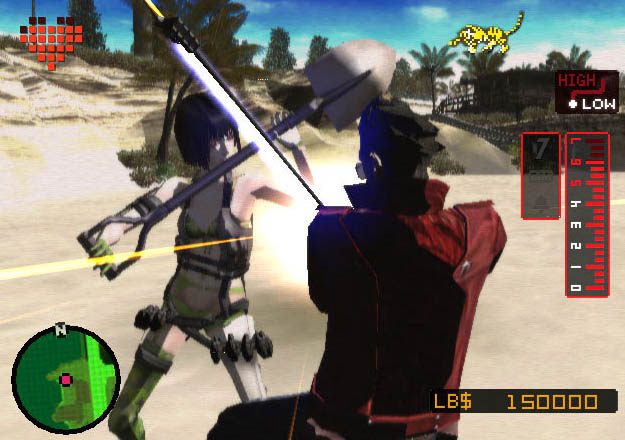 At this point you may be feeling the same way about this article, wondering what the hell any of this has to do with Suda51 and No More Heroes. You are probably wondering why the fuck I am wasting your precious time procrastinating at school or work with this article. Hold on. I'm getting there.

The first two acts of Adaptation are not unlike Killer7, Suda51's edgy and controversial predecessor to Heroes; both are weird and untraditional takes on their respective media. Adaptation is a semi-linear narrative, where perception and reality are constantly subject to change. It can make for a frustrating viewing experience for the set who couldn't follow Pulp Fiction's twisting narrative. Likewise, Killer7 is equally frustrating. It is mostly unlike any game ever, seemingly cobbled together with the parts of other superior games, but in the strangest way possible. Every gameplay element sets up your expectations only to subvert them entirely.

The shooting sections basically play out like Operation Wolf, but so soon after Capcom's own Resident Evil 4? the shooting feels archaic and a little embarassing. The rest of the game, the adventure segment, is also more akin to games like Shadowgate and Déja vu than it is to Resident Evil or Silent Hill. For one, traveling between hot spots is completely limited to rails with no real direct control over your character. Secondly, each "hot spot" is essentially a screen out of those old MacVenture games. Even then, though, the design delights in pulling the rug out from under you again. The map screen will show you which character or items you need to progress at each roadblock, entirely removing any challenge. The presentation is atypical as well. In an industry where photorealism is the virtual philisophers stone, Killer7 is rendered with stark, hyper-stylized cel-shading. And its story is unusual, too, as most narrative-driven games have similar tropes and clichés, such as love blooming on the battlefield or becoming some sort of Manchurian Candidate or whatnot. Killer7, on the other hand, is about...?

In many ways Killer7 is a non-game, eschewing the medium's most basic conventions as the first two acts of Adaptation do to traditional narrative. What makes both compelling is the overarching weirdness, the feeling that is something you havent seen in a game before. It was the feeling you get from watching Tetsuo the Iron Man for the first time. However, most people would rather see Downey the Iron Man instead, and many people echoed Robert McKee's sentiments when playing Killer7. The New York Times states:

"Bizarre imagery and disorienting concepts are great in small doses: the 17-minute Luis Buñuel film Un Chien Andalou, for example, is as cool now as it was in 1929, but I wouldn't want to see it expanded to several hours. It is likely to take at least 15 hours to finish Killer7, and the game uses every idea it has in the first hour."

It's a shame no one makes three-hour games, because Killer7 would make a great one. If you want to see a game push beyond the conventions of game narrative, then Killer7 is worth renting. But prepare yourself to be consecutively thrilled, confused, provoked, annoyed and bored senseless. 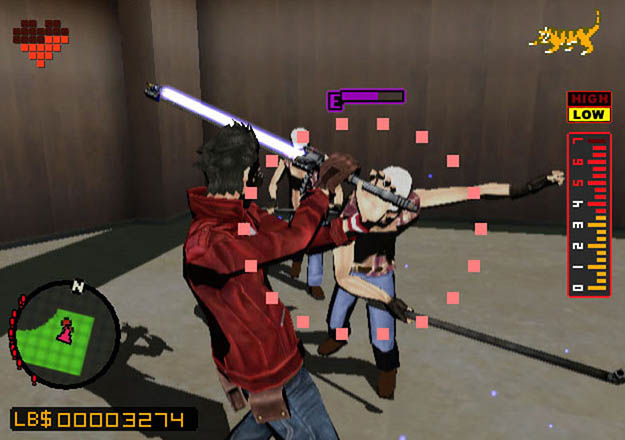 And then, something happens. Charlie takes McKee's advice. Car chases, illicit sex, murder, life lessons and crazy orchid drug deals: These ensue not only in Charlie's screenplay, but in his life as well as he discovers that the author of The Orchid Thief, Susan Orleans, has been having an illicit affair with John Laroche, as well as extracting a crazy drug from the rare ghost orchid. The pair confronts Charlie and murders Donald. Charlie escapes when Laroche gets eaten by an alligator after a car chase. The cerebral and frustrating story of Charlie Kaufman in the first 2/3rds of Adaptation give way to a broad pastiche of sex, violence and action movie cliches. Excitement and irony abound.

In Suda51's Killer7 follow-up, No More Heroes, something happens as well. The game sheds some of its predecessor's more esoteric gameplay and presentation elements. The outmoded controls are replaced with a standard analog interface and some minimal motion controls. The harsh, surreal cel-shaded graphics have been toned down somewhat and are in a middleground between Killer7's style and something akin to "regular" games. No More Heroes' game mechanics are also far more mainstream than Killer7's as well, making it a stylish action game not unlike Devil May Cry? or Ninja Gaiden. It has all the action and excitement that the hyper-violent Killer7 insinuated but never delivered on due to its iconoclastic game design. In the name of Harman.

But just like the third act of Adaptation, this isn't just simply a straight concession to a broader audience. As Charlie's life begins to reflect the tacky action thriller script he will write, a satire on mainstream cinematic tastes, No More Heroes seems to be a farce on the action genre, otaku culture, and indeed gaming as a whole. Travis Touchdown is a retro-styled hipster doofus who happens to be the proud owner of a lightsaber (er, "beam katana" -- whatever. A spade's a spade). Hardly a cool detached one-liner-spouting machine like Dante or a simmering cauldron of angst like Kratos, Travis is goofy and hard up. Instead of revenge or duty, he is more concerned with beers and boners. He is motivated to defeat the eleven assassins not to be the best, but to get laid by the evocatively named Sylvia Kristell. (For reference, I decided to bust out the Emmanuelle tapes I recorded off of Cinemax 15 years ago. For research, you see.) 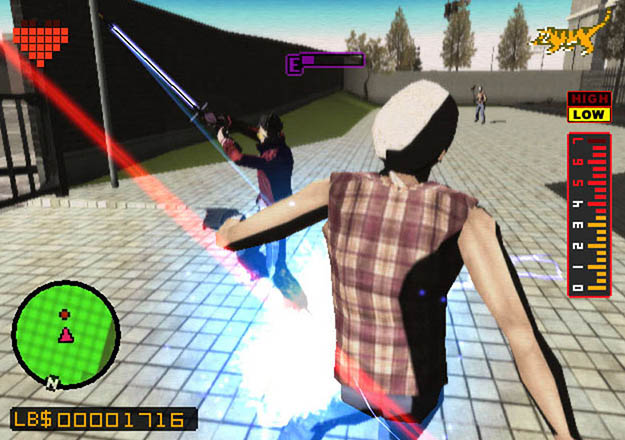 Sexual subtext is all over gaming. Sometimes a cigar is just a cigar. Sometimes. We all know gaming's heroes wield thier ludicrously sized swords as enourmous phalluses, perhaps to make up for their otherwise lack of masculinity, but Travis really "beats" the point home by jacking his beam katan to recharge it. Cloud just sticks his into Sephiroth. Omnislashfic!

The world map of No More Heroes, the town of Santa Destroy, is large and empty. It is considered by many to be easily the worst part of the game, especially when compared to more robust Grand Theft Auto? games. However, the game seems to be a super-meta-postmodern critique on the boring futility of sandbox games -- that's what Scott Sharkey says, anyway. Travis can screw around Santa Destroy, doing jumps and stunts, picking up inconsequential side missions, and getting mundane jobs such as pumping gas, catching cats and mowing lawns. Niko Bellic on the other hand can do jumps and stunts, drive around his needy, passive-aggressive friends, play darts, and go on inconsequential side missions. Hmm. At least in No More Heroes you can also return pornos, get molested by your sensei, learn lucha libre moves from guys in Calgary and hang-out with drunken has-beens. Let's see the cousins Bellic top that. And versus Liberty City's latest crime-splosion, No More Heroes' combat controls aren't hot, fetid, filthy garbage. In fact, said controls are quite slick -- superior in their way to the aforementioned Devil May Cry. And the Wiimote chicanery is kept to a bare minimum, reserved for finishing move bloodbaths and German suplexes.

While playing BioShock, weren't you a little dissapointed at the way the plot progressed, that you played the roles of both the antagonist's son and his unwilling assassin due to mind control? In a game that had such a novel and unusual setting, it was saddening to see the pivotal moment boil down to those hoary old gaming tropes. Sure, it was cool and all that Golbez was Cecil's brother, but that was back in 1991; even in Return of the Jedi, from eight years prior, the "Luke and Leia are siblings" twist was dishearteningly lame. And whats with Atlas' 11th-hour change into a, well, video game boss? At least Zemus had the good sense to come out of absolutely nowhere for the final lunar dungeon. 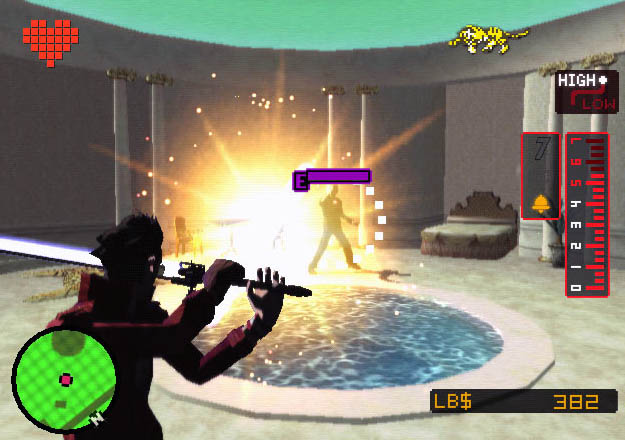 Ultimately, No More Heroes even eviscerates the medium's tendency for these ridiculous overblown plot-twists. At the end you get to fight your Darth Vader-like father, who gets killed by your former lover, who in turn is revealed to be your sister who murdered your family. While this is all playing out the dialogue is fast forwarded, as if on a VCR with Travis commenting how we don't need to be bothered by this. Additionally, if you get the extra special ending, you find out the other blade katana specialist is also your brother. And he's Irish. It's played for laughs, as well it should be -- but you know that if all this happened in Metal Gear Solid or an M. Night Shamyalan movie, it would be presented completely at face value.

Through its satirical nature, the end of Adaptation subverts the audience's and Robert McKee's expectations. We get everything that McKee says makes a compelling cinematic experience, but we also get something else. Sarcasm? Spite? Snark? Whatever it is, it's cool as hell. With No More Heroes, we get a slick and excellent action game, but with the added bonus of all Suda51's attendant weirdness and snide observations about gaming's conventions. What has Devil May Cry made any commentary on? The proliferation of effete white haired men with large swords? How about God of War? That Ancient Greece actually looked like Mortal Kombat's Outworld? Finish him! Excellent? -- or maybe just average and expected. Not very subverted at all.