Its hard to describe Sword of Vermilion without resorting to my usual combination of gameplay and historical anecdotes. Ive already stated elsewhere that Shining Force II was what kept me in the hobby until I got my grubby paws on a PlayStation and Final Fantasy VII; with Vermillion it was the less the game itself than my experiences surrounding it that have ultimately stuck with me.

That's what makes this so tricky. Sword of Vermilion serves as a sort of foundation for my tastes and expectations for video games, colored through nearly fifteen years of other games and experiences. Trying to unravel that sort of evolution of tastes while pinning down its origins and influences is no small feat. 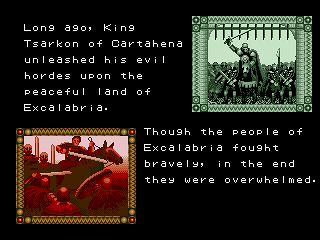 At any rate, Vermillion isnt a generally regarded as a particularly special game like Super Metroid. Its game design borrows a lot more from Zelda II than from anything else, what with its blend between first-person world and dungeon travel and third-person combat and town roaming, with some side-scrolling boss battles thrown in for good measure. It was very much an early Genesis game, suffering from the usual surfeit of ambition and lack of experience with the hardware necessary to fully realize those creative aspirations. It was, at times, entirely frustrating to play for reasons stemming from the games general rough edges, true flaws, and the limitations of the Genesis hardware -- though I didn't really feel that way at the time. It's only in hindsight that I can recognize Vermillion's shortcomings. 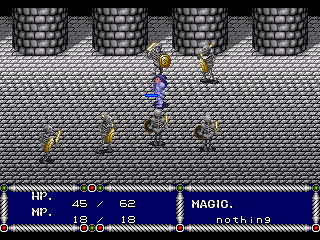 As a kid, I was never really stopped to consider the fact that people made games beyond some primal awareness that someone had to have made it in order for me to be able to play it. Thus difficulty, in my mind, rarely stemmed from a games intrinsic flaws; somehow, I assumed, a tough game was my fault. If I died in battle, it was because I couldnt hit the monster, not that the hit detection was somewhere south of terrible -- and I spun countless similar justifications for many other seemingly personal failures of my gaming chops. Nowadays, I know better, but as a kid I was oddly fond of those masochistic challenges that boy like to take on in order to prove that they're not a wimp. Never mind the fact that simply playing a game like Vermillion wouldve marked me as a wimp back in those days.

As a matter of general taste, I really dont mind chasing across labyrinthine overworlds and dungeons in quest of fat loot and secret caves. I really like real time battle systems, too, because I can't stand the lack of impact that most turn-based systems seem to suffer from. These elements exist in Vermillion, and in spades. Intricate world map that makes no geographical or logical sense? Check. Real-time battles with shoddy hit detection and often terribly unfair monsters? Check. Looking at my gaming tastes from that angle, its pretty easy to see why I like the Tales games. At least as far as mechanics go; I can only explain my predilection for anime-esque plot and mountains of text by way of FF VII. 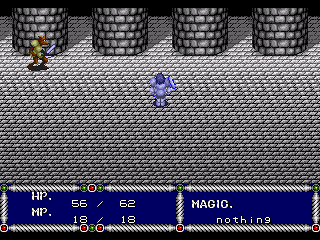 Great father-son bonding experience aside, Vermillion also makes a handy way to chart the different paths my father and I have taken as gamers. He still plays games, but mostly of the RTS and FPS sort -- though knowing what his other hobbies are, it doesn't come as a surprise to me. As for myself, my tastes developed differently. My fathers preferences in games are a more or less a natural extension of his background and hobbies, while mine grew out of a firm desire to avoid the things troubling me -- pure escapism. I've never been terribly social, and gaming was a way to avoid both boredom and having to deal with other kids in a social setting. Some of my preference for RPGs stems from the simple fact that a single playthrough take much longer than in other genres. I didnt even particularly care about the plots until I started to want to write fiction several years later -- a desire birthed by FFVII, as it happens. 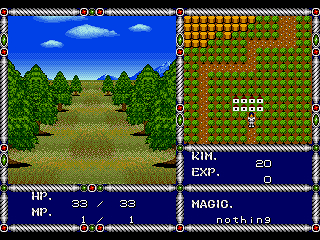 As I've gotten older, Ive grown out of the habit of using games as a way to hide from others -- chalk it up to self-perspective (and hopefully maturity), I suppose. These days I actually enjoy games simply for fun, although it's been slow in coming due to my being a morose teenager most of the time. Gaming as a form of escapism didnt preclude having fun, but a game's entertainment value used to run a very distant second for me. Only recently have I come to recognize that I've done both myself and games like Vermillion a disservice. 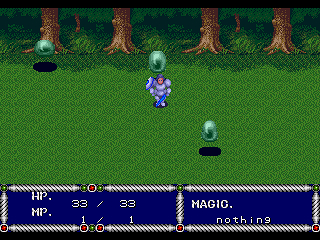 Still, perhaps I've made amends. It was my coming across old Genesis games through those old PC collections and emulators that showed me that gaming was supposed to be about having fun rather than a rote habit or a way to escape the problems that I didnt want to face.

Which brings us back to Sword of Vermilion. Returning to this old favorite again after ten years was an eye-opening experience... mostly because I wonder how the hell I had ever managed to play through it so many times without cursing the controls or wondering where the heck I was supposed to next futilely. Yet while it may be an annoying early Genesis RPG through and through, without Vermillion, I wouldnt be the gamer I am today -- and probably not the person I am, either.

Thanks to GameFAQs for the boxart.