Sadly, 3 in Three remained a Mac exclusive and never appeared in a format playable to most of the computer-owning world -- a huge shame. A full-color game in a time of primitive PC visuals, it moved beyond traditional puzzles to those concepts only possible on the computer as it regaled players with the story of a number three zapped off a spreadsheet during a power surge and forced to solve logic puzzles in order to get home. (Also included: a wink-and-nudge meta-commentary on the sheer ridiculousness of the concept.) 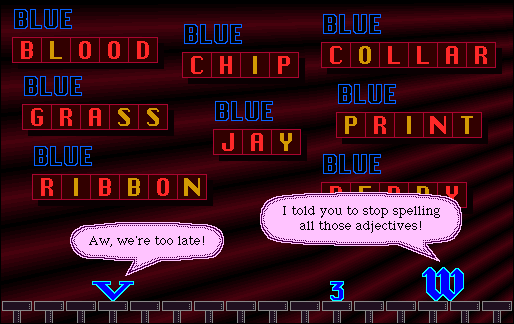 It's tough to make a good logic puzzle game. Action puzzle games like Tetris or Planet Puzzle League? can have simple gameplay mechanisms, because at higher levels of play the skills being tested are reflexes and quick thinking rather than puzzle-solving. But when a puzzle game requires little to no reflexes, it needs variety. Lacking that, solving the puzzle can devolve into following a rote algorithm -- as in larger sudoku puzzles -- or become nearly intractable because it can't be reasoned out in the player's head -- as in larger sokoban variants (see Boxxle). 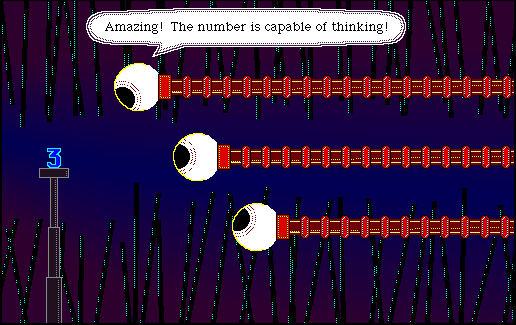 Thus, a truly great puzzle game must feature a wide variety of puzzles. Cliff Johnson's genius is that all of the different puzzles in his games are good, make sense, and can be solved without hitting your head against the wall too many times. Indeed, the only time the puzzles in 3 in Three fail to be great is when they rely overly on hand-eye coordination.

Some of the puzzles in the game are word puzzles that could easily be completed with a pencil and paper. These include anagrams, cryptograms, crossword-like clues, and filling in missing vowels. But there's more to it than the newspaper fun page; Johnson stepped up and took advantage of the computer medium to move beyond traditional pencil-and-paper puzzles. His logic puzzles include shifting letters on different preset tracks to spell words, figuring out which three rearrangements of letters will spell a new word, and grids of windows that must be closed by clicking on them to alternately open or close individual windows.

On top of all this, Johnson integrated puzzles into other puzzles. Whether it be a crossword-like clue that gives you the word that is the theme for the whole puzzle or having to find the solutions to a final puzzle from the solutions of all the previous ones, you always have to be on the lookout for new clues. For logic puzzle junkies, this provides a great fix. 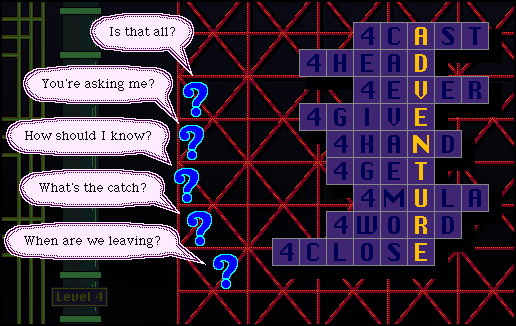 Interestingly, the puzzles that initially seem the most obtuse end up being the easiest to solve, while those that seem the most tractable can be the most difficult. This is a key to the puzzle designs that makes them worth solving. The puzzles where you are stuck without knowing what to do at the beginning always have an epiphany moment where you get the right word and it falls into place. Once you realize that all words (for instance) contain the number two, or are part of compound words with "black," the puzzle becomes simple to solve.

Meanwhile, other puzzles -- like the ones where you shift letters around on different tracks or must rearrange letters three times to spell a different word -- end up taking the most time. You'll initially try a few things and see yourself getting closer to the solution only to realize too late that you've spelled "mabey" instead of "maybe." As a result, puzzles never feel too hard or too easy, and completing them leaves the player with a great sense of accomplishment. 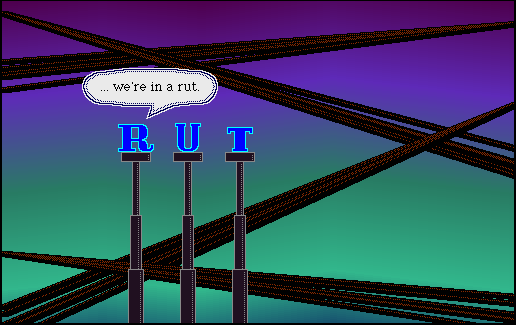 In between sessions of wracking their brains to come up with puzzle solutions, players are presented with a truly whimsical story. As a number three, you find yourself in the land of letters and must cope with their idiosyncrasies -- which generally include mistaking you for an oddly shaped "B." In the world of the computer, letters and numbers go to work each day in the word processor or spreadsheet. In their off time, they like to make horrible puns and jokes about their names that would make even Abbott and Costello blush. While you may never laugh out loud at the situations in the game -- indeed the purpose of puns seems largely to make people groan -- you will go through it with a smile on your face. 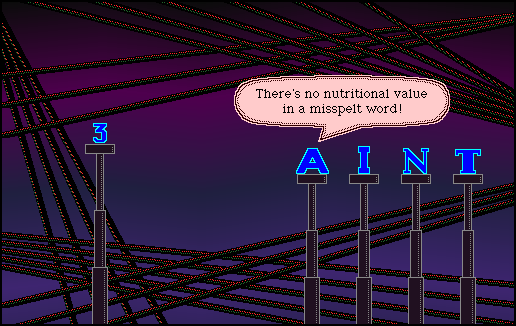 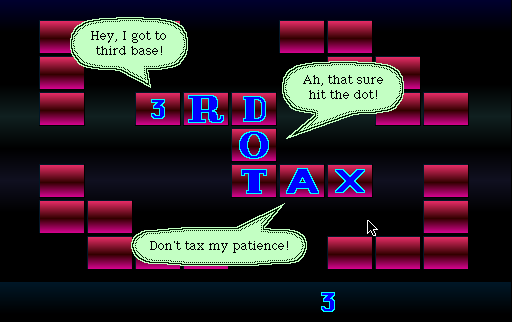 3 in Three also offers a rare example of a female protagonist. Like Lara Croft?, her most prominent physical attributes are her curves, yet this three has a shining personality. She is inquisitive, intelligent, tempered with worldly cynicism, and not afraid to throw around a few insults when things aren't going her way. 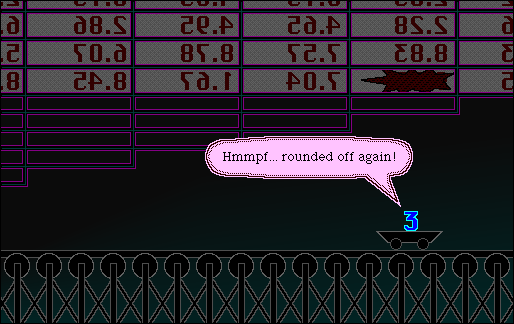 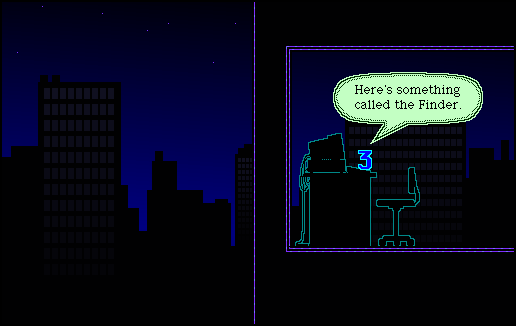 3 in Three is a product of its times -- and that's meant in the best possible way. It was a quirky game released on the Mac by an offbeat yet ingenious developer, back when that would have described about half the Mac's library. The Mac feel extends to the use of the classic Chicago font and Apple-made sound effects -- just how many Macs had that boing for their alert sound? The simple but high-resolution graphics were also uniquely Mac in a time before PC owners even knew what SVGA was.

Most impressively, the story and puzzles are a product of one man back when one man could put together a solid software product. 3 in Three stands today as a great experience for anyone who loves solving logic puzzles, or who just wants more variety and whimsy than that provided by their daily newspaper sudoku. And it helps if you can stand awful puns.