From the archives: They Were 11

Hey dudes, I’m going to be republishing a lot of old content over the coming months so that I can get it all into the WordPress portion of the site and out of the disused wiki area, as well as incorporate minor revisions and improvements. So please enjoy all this fine material again for the first time. (And no, it won’t be coming at the expense of new material.) I’m starting with this review of They Were 11, whose plot and themes seem particularly relevant after a year in which gender identity and awareness played such a significant role in the public nerd culture discourse.

They Were 11 | Review originally published April 2007

Going back to reevaluate something you once enjoyed long, long ago is always a bit of a crapshoot. The wisdom of hindsight is most likely to reveal one of two things:

(1) It was totally great and your warm, fuzzy memories are absolutely merited, or

(2) It was actually completely stupid and, by extension, so are you.

And typically, the second outcome seems to be far more common than the first. Well, for me, anyway. Maybe it’s a poor idea to build a generalization around graphic proof of my own poor taste, but what the hell. The Internet is where solipsism goes to spawn and have little self-centered babies, and heaven forbid I should sit on the sidelines for the duration of the festivities.

Every once in a while, though, I stumble across something that doesn’t just weather the ravages of time and maturity but actually improves. Such is the case with They Were Eleven, an anime space opera whose finer points I am far better equipped to comprehend now that I’ve been using the Internet for so much longer than when I first saw it. There’s some pretty damn weird stuff out there, much of it from Japan, and They Were Eleven comes off as being a lot more sane now that I’ve had an extra decade or so to come to terms with the film’s context. 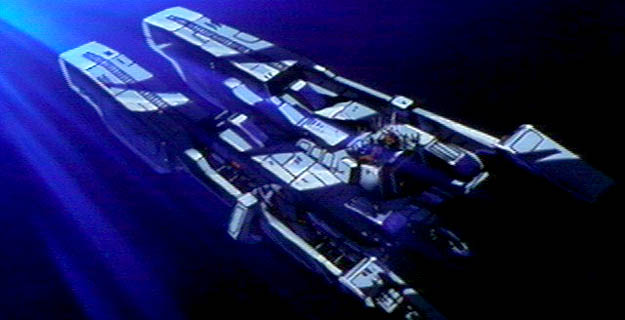 First: A history lesson. As a movie, They Were Eleven is more than 20 years old. This is why it has that charming (by which I mean dated) analog look to it — it was put together way before digital paint and other, similarly soulless technologies became prevalent. It’s a little clumsy, but the art possesses a certain classic warmth that makes it all okay.

As a creative work, it’s even older, having been adapted from a ’70s manga by Moto Hagio, she of the same school as To Terra author Keiko Takemiya. This is why it looks even more dated than your average ’80s movie. The loony costuming and long-lashed character designs are right in step with the rest of the budding shoujo sci-fi work of the other “Magnificent 49ers.”

So don’t be so snobbish about the work’s age. In 1976, your parents were probably dressed in uncoordinated polyester and snorting cheap cocaine while watching Mannix. In 1986, you were probably still wetting your acid-washed pants and crying because mom wouldn’t let you have one of those new Intendo machines. Advantage: Moto Hagio.

Knowing that They Were Eleven was born of that particular era and genre is vital to comprehending the gender identity subplot at the story’s heart. As in all good sci-fi, plenty of questionable physics and hidden saboteurs and occasional weapon discharges are on hand, but ultimately this movie is about identity and cooperation and other such heartwarming concepts. The original work predates Star Wars by a few years, so it falls more in line with the likes of 2001 and old-school Star Trek — slower, quieter, more about survival in a new frontier than kicking ass and taking names by means of glittering explosions.

And being a proto-shoujo work, it’s also about longing glances between impossibly beautiful young men. Er, more or less. 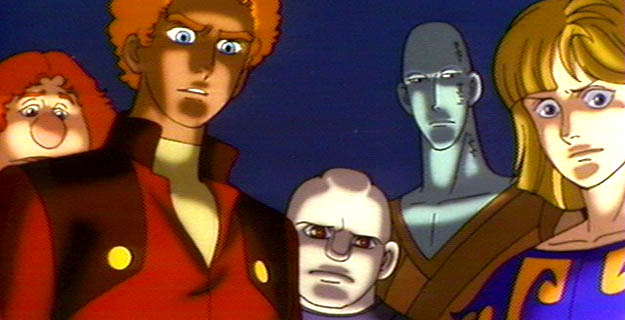 Impossibly beautiful, but only in the case of the major characters. The impossibly ugly ones get to lurk in the background. And everyone’s dressed like, uh, yeah. This probably worked better in black and white.

No, the ugly dudes don’t get to share any longing glances. With anyone. They do share a comical moment in the thick of a food fight, though. I haven’t read the original manga, thanks to a licensing screw-up that has made the only English edition’s value skyrocket to many times its cover price, but I’m guessing the undignified food-flinging episode was probably not in the source material. It is the cosmic equivalent of the circus episode of Rurouni Kenshin. 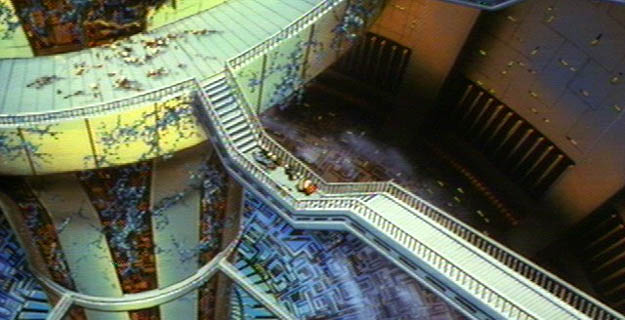 The premise of They Were Eleven is simple, classic science fiction: In the far-flung feature, mankind is all buddy-buddy with countless alien species. Still, space travel is still enough of a frontier that contact with other races isn’t something the average citizen experiences daily and the various gill-headed fishmen and algae-blooded musclemen who comprise the Federation or whatever they call it are still a bit foreign to most humans. It’s an allegory for the modern world! Or whatever meaning you decide to inflict upon it.

And the crown jewel of this collective, peaceful civilization is a far-away space academy where the best and brightest of every race goes to learn to be important. Only a select handful are granted admission, see, and basically once you graduate it’s like a free pass to become a mover and shaker.

Our Noble Hero is a young man named Tada who joins the academy at his elder’s behest. The story begins with the final admissions process: A written (well, typed) test followed by a long-term final qualification round. Candidates must survive three months in a derelict starship with a group of nine other academy hopefuls. The goal is to learn to work together, to apply lots of knowledge of science and technology to stay alive, and not to give up. Because should the group give up, they all fail instantly and be forced to return to their dreary McLives.

This is, predictably, complicated by a terrible plot twist: Moments after the group arrives aboard the derelict ship, a trap causes a chain of explosions that severely damages the craft. Worse, the 10-man crew turns out to have a bonus member — hence the title. They were… eleven! Not in age, in quantity. See, it all makes sense now.

More problems arise as the test commences, none of which are helped by the knowledge that one member of the crew is an evil saboteur out to kill them all. Worse, not even the resident touch-telepath can figure out who the culprit is.

Problem one: The explosions caused the ship to break its orbit and drift toward the sun, so the temperature begins to rise. Just like the tempers! Problem two, the candidates all discover a weird alien plant infestation growing throughout the ship, which clearly is up to no good — although precisely what kind of no good remains a mystery. 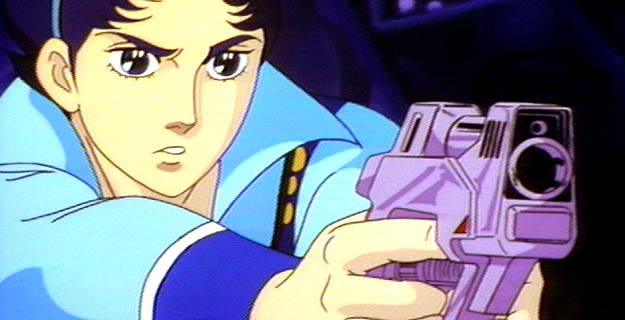 Meanwhile, Tada demonstrates an inexplicable knowledge of the ship’s inner workings, which causes two of his more impossibly beautiful companions to regard him with suspicion. As one of them is the king of his world and the other is a high-born noble to whom most of the other students immediately kowtow, it’s bad news for Tada — bad news that culminates in a shoot-out.

A very gentle shoot-out. It is shoujo anime, after all.

In the midst of this, Tada finds himself lighting a romantical spark with one of his fellow candidates, a young man so impossibly beautiful for a male that his being really is impossible. As it turns out, the ridiculously-named Frolbericheri Frol isn’t strictly male — he actually belongs to a race of people who begin life genderless. Only the first-born child of each family is allowed to become male upon reaching adulthood. Frol, alas, already has an older brother. Being the middle child is always a bummer, but in Frol’s case it’s more than a mere bummer: It means looking forward to a lifetime of slaving over a hot stove, leaning forward slightly to keep that perpetual baby belly bump from touching the oven surface and trying not to slip bare-footed on the kitchen floor. For him, entering the academy represents a feat so prestigious that he’d be allowed to buck tradition and grow up to be a man.

So, Tada finds himself in the unfamiliar position of being hot for a girl who actually isn’t. Although you’d think that for someone so determined to become a manly man, Frol would be a little less… girly. Maybe cut those flowing golden tresses, not wear comparatively plunging necklines, maybe be a little less touchy-flirty with Tada. Only Frol’s speech betrays his innate machismo, as he speaks with a coarse, exaggerated, masculine, Japanese dialect. This, of course, doesn’t come through in the English script at all.

And the uncertain relationship between Tada and Frol is the crux of the film; yes, the three-month mission and the tension caused by the 11th man are all solid in their own right. But They Were Eleven is ultimately a good story because those points serve as a backdrop to a more intimate human(oid) drama. Tada and Frol are sweet on each other, but their budding romance has a rocky future, regardless of what happens. If the candidates’ mission succeeds, Frol becomes a man and conservative young Tada has to totally rethink his preconceptions of sexuality; but if they fail, the gender fairy turns Frol into a girl, destroying his dream of an ovary-free existence.

The ultimate resolution to their tale turns out to be a disappointing cop-out where old-fashioned ’50s gender roles win the day, but everything up to that point is emotionally charged — and it feeds back into the larger plotline. When Tada is framed by the saboteur, for instance, Frol pursues him far more vindictively than the other candidates, with the ardor of a betrayed lover.

I didn’t know what shounen-ai, boys love and yaoi were back when I first saw the movie, more than a decade ago. So I didn’t quite get They Were Eleven. (Plus, it was pretty different from the West Texas norm!) But now I understand its context — the fact that it was basically a dry run for an entire industry of cartoons about wispy young men who want to make with the tender touching but feel trapped by the repressive heteronormality of modern society and such.

So I guess They Were Eleven bears a lot of the blame for a generation of dippy teenage girls writing bad fanfic about Snape makin’ whoopie with Dumbledore, but whatever. It’s still really good after all these years. Better, even!

3 thoughts on “From the archives: They Were 11”