Yep, you get to suffer through a couple of months of Breaking Bad posts. What did you expect, though? 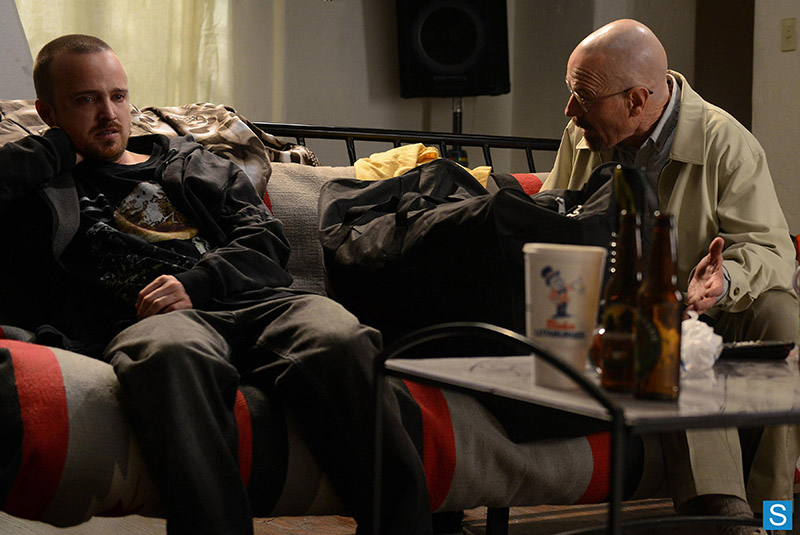 “I need you to believe me,” Walter White tells his erstwhile partner Jesse Pinkman after returning two massive duffel bags of $100 bills — five million dollars in total, the blood money which gives this episode its title — to the younger man, who had tried to give it to families of the duo’s misdeeds. His magnanimity was a foolish act, as Walt and their lawyer Saul both point out, but it came from a good place: Jesse’s genuine sense of remorse for all the havoc he’d help inflict on innumerable innocent lives over the past year of brewing methamphetamine.

Walt, on the other hand, gives no indication of regret. Sure, he’s “out” of the business, as he promised his wife Skylar, but only because they’d managed to accumulate so much wealth through the drug empire he’d built, borrowed, and stolen they’d lost the ability to count it. They’ve accumulated a sum that will take decades for the two of them to launder their carwash business. But Walt seemingly has no regrets for his actions, even as he assures Jesse that their former collaborator Mike couldn’t possibly be dead — though of course he’s dead by Walt’s own hands — and insists on being the beneficiary of Jesse’s good faith.

But Jesse is clearly beyond good faith. He may be beyond everything. Dead-eyed and weary of the world, he buckles beneath the burden of so much money acquired through such dark means. Unable even to hand over the money to those whose lives and families he helped destroy, he ultimately resorts to simply driving down the street in the dead of night, throwing stacks of benjamins into people’s yards. The phrase “blood money” calls to mind Judas Iscariot, and while simply tossing his proverbial silver pieces into the night might seem less self-destructive than Judas’ choice, in the end he may have hanged himself all the same. Surely someone will take notice of Albuquerque’s sudden rain of cash, and Jesse’s fingerprints are all over it.

Of course, Judas’ payment was for betraying his mentor. Contrarily, Walt is the one who has betrayed Jesse, repeatedly, and this money is meant to soothe whatever ragged conscience still exists in Walt’s vestigial soul. Walt has secretly had a hand in the deaths of the closest people to Jesse, and it seems that as long as Jesse accepts his payoff he can feel good about himself. But he’s so smug, so insistent on simply convincing Jesse to accept him as right and righteous, he seems oblivious to the burden hatred and realization in Jesse’s expression. There’s no way Mike could be alive, Jesse must realize; Walt (whom Mike wanted dead) could never be so calm if he were.

The epiphany that Mike really must be dead — and who knows what else Walt has lied about? — crushes him. You can see him shrinking in his seat, burdened by its weight. He stares glassily into space. He wanders the night. He flings money into the void, tears streaming down his cheeks.

On the other hand, Walt’s brother-in-law, do-gooding DEA agent Hank, is galvanized by his own realization of Walt’s enormity. Where Jesse stews, Hank springs into action, so tightly wound that he nearly gives himself a heart attack. Rethinking the Blue Sky meth equation with the uncertainty of Heisenberg replaced by Walt as the variable, he spends the week poring over case files and refreshing his memory of all that has happened in the name of Blue Sky.

Hank may be many things — obsessive, dismissive, obnoxiously fratboyish — but subtle isn’t one of them. Any possibility that Hank would play a game of cat-and-mouse with Walt, baiting him to incriminate himself, is quickly dashed when Walt confronts Hank about the GPS tracking device he’d attached to Walt’s car. Hank makes it clear he has no interest in drawing things out by leaping at Walt and punching him square in the face. Wild-eyed in fury, he beats on his newly revealed nemesis with both words and fists, reciting Heisenberg’s most grievous crimes in an almost incoherent blur. It’s the confrontation that’s been brewing since Hank obliviously drove up to Don Salamanca’s desert home, and time has only made it more intense.

And yet, by giving Walt a moment to regroup, Hank loses his upper hand. Walt has kept himself alive through seemingly impossible situations with a combination of words and improvisation thinking, and those skills serve to do the trick here, too. Despite the rage behind Hank’s brutal attack, Walt nevertheless turns the tables, ending their encounter by being the one to issue a warning to the other man.

But the show’s cold opening — the long-awaited continuation of season five’s flash-forward — reminds us that while Walt may excel at wriggling out of deadly situations with his slippery words, he’s in far over his head. Short-sighted, complacent. He sees Hank as a threat, but appears completely oblivious to the dangerous potential of Jesse on the brink of a meltdown… despite the fact that he’d gone to great lengths to protect Jesse from Gus Fring for fear that the younger man’s previous breakdown would endanger their drug operation. He seems to think he can simply walk away from his kingpin duties and brush off his notoriously high-strung former international contact Lydia with no repercussions, when it’s clear her life hangs on his cooperation.

While Hank and the DEA may seem to represent the most obvious threat in Walt’s mind, the flash-forward makes it clear that whatever sent him packing all the way to New Hampshire only to return home to retrieve the series’ most prominent Chekhov’s gun — the capsule of ricin he created back in season one — with a squad assault weapon in tow wasn’t the DEA. Generally, the government doesn’t loot a house and spraypaint its resident’s secret criminal alias all over the walls.

So the question now isn’t, “How will Walt’s life end?” but rather, “Who will do him in?” And, “What other innocent lives will he destroy in the process?” (And, “Will he really do the cliché Scarface thing and go down guns blazing?”) What Walt has always wanted more than anything in the world is to be right, but it’s all gone too far now, and no amount of insisting others take him at his word will change that.