[Blog topic by request of Vega]

I really enjoyed J.J. Abrams’ theatrical reboot of Star Trek until I watched the third and fourth seasons of Enterprise and realized that the show runners eventually got that show on track despite themselves and managed to create a series that better captured the essence of what Trek is supposed to be about than anything since Next Generation‘s heyday. I still like Abrams’ work, but it definitely feels like an alternate universe… which it is. One that Paramount can easily retcon as soon as it suits their purposes. Everyone in Trek always tries to right broken timelines, so there’s an unspoken Damocles sword hanging over the films.

Like the films or not, the entire Trek concept is being sadly squandered by the movies. Not because they’re bad or false or anything, but because they barely scratch the surface of things. We care about movie-Kirk and movie-Enterprise because we like the versions of those things that were developed over the course of 80-odd television episodes in the ’60s, not because the movies have made them particularly compelling. What Trek really needs is a new TV series. But not a typical Trek TV series. We don’t need seven seasons of 26 episodes apiece, the first 50 episodes of which force us to suffer through the producers, writers, and actors trying to get a handle on the whole affair.

No, what we need is Trek in the mold of an AMC or HBO premium series like Breaking Bad, Game of Thrones, or Mad Men. A series conceived from the beginning to uphold a higher standard of writing, of acting, and of planning. A few short seasons — no more than 13 episodes per season — that follows a clear plot arc in service of a definite conclusion.

Most importantly, it needs to focus on characters. Not big galactic conflicts, not dopey cultural snafus, not first contacts. Those things should be present, but they should exist in the background in service to building the characters and the tensions and conflicts the primary cast experiences. The writing should be grounded and interesting. No stupid technobabble allowed; or at the very least, any technobabble that appears should be constrained and consistent.

The question then becomes, what would the setting be? Trek takes place in space, usually on starships, which makes for a nicely self-contained bubble for the cast. But I think the standard approach of a Federation starship on a mission of exploration probably doesn’t lend itself to good internal drama, especially when the Federation’s starship crews are meant to be the best of the best of Gene Roddenberry’s utopian species, all rising above conflict and strife.

So maybe we look beyond the best of the best and explore life around the edges. Maybe we explore the life of a human captain in uncharted space, caught in a much larger plot? Or perhaps this theoretical Trek series revolves around a non-human. In any case, there would need to be a hard edge to the story. Place the protagonist into difficult, potentially compromising situations. Not a gritty and mature edge for the sake of being capital-B-badass, just a premise that would create genuine tension and legitimate stakes in a sense that’s rarely seen outside of the Xindi and Dominion arcs of Trek. At the same time, I wouldn’t want them to use those plotlines as the template, because using war as the premise feels like familiar territory.

One possibility: Set the series during a Federation/Romulan war… not an all-out conflict, but rather a cold war. Make the lead character a Vulcan who chooses to seemingly betray the Federation behind the scenes, providing tactical information that keeps the sides even. Why? Because she finds a bloodless stalemate more logical than a situation in which either faction gains the upper hand and one side or the other presses the advantage. Is she doing the right thing? Maybe, maybe not, but the “good guys” wouldn’t take too kindly to it. And the “bad guys” would probably find her useful only as long as her information was on-track.

Oh, yeah, and one other thing. 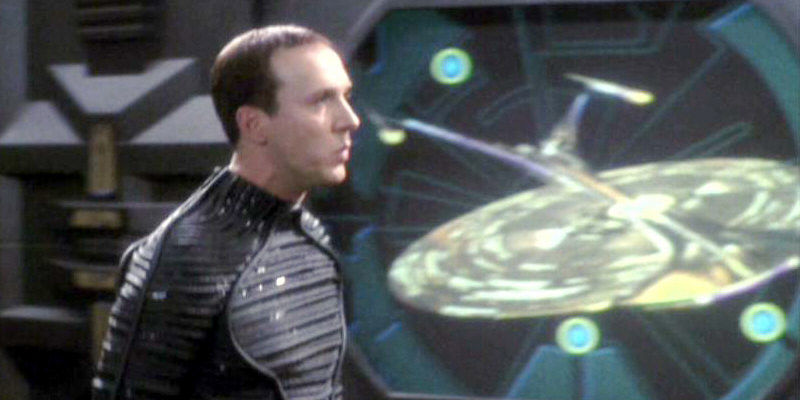 No effing time travel. That crap ruins stories. Keep it real. Make everything count. No cosmic reset buttons. This is a universe where people carry handguns that can disintegrate your entire body in the space of a second. Let’s make it feel dangerous.

Either that, or make a cartoon focused entirely on the weird adventures of M’Ress.

24 thoughts on “Prospectus for a worthwhile Star Trek TV reboot”