I know this has been said before, but I just have to call out the design of the Minotaur in Shin Megami Tensei IV for being really excellent. Long-time fans of the series are pretty lukewarm on a lot of the new demon designs for SMT IV, since they weren’t put together by long-time artist Kazuma Kaneko and a lot of them replace classic designs with pretty lousy renditions. But Minotaur does it right. 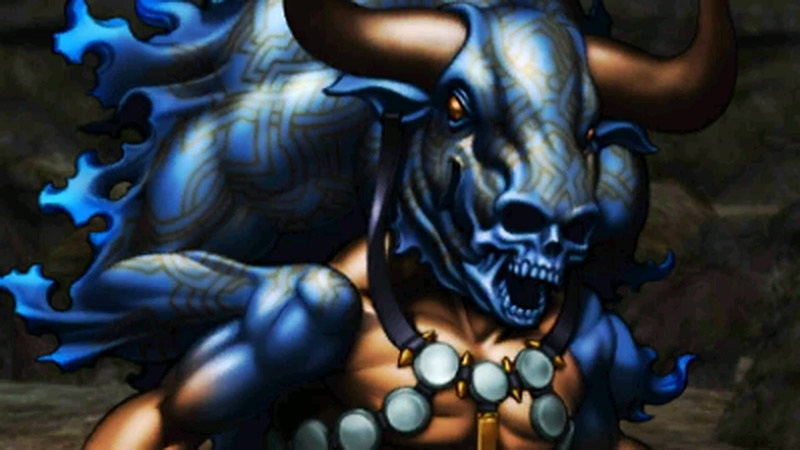 I mean, look at that guy. He’s like the M.C. Escher illustration of demonic anatomy, with every detail of his head performing visual double duty. His proportions and anatomy work on multiple levels, creating a really fantastic visual ambiguity between the bovine skull and the human skull — is it a human face whose trailing hood forms the shape of a bull’s head? Or is his face that of a bull, with nostrils and a mouth that resemble the eye sockets and mouth of a man? Does he have human arms with curious vestigial appendages trailing behind at the shoulder, or are his arms actually just the lower portion of the bull’s forelimbs?

It’s a grotesque optical illusion of a character design, otherworldly and seemingly impossible to resolve in a proper three-dimensional image. Anyone who complained about the use of 2D illustrations for SMT IV‘s battle sprites (never mind that the cartridge didn’t have room for 400+ 3D models) needs to reconsider this guy, whose visual impact would be greatly diluted by any attempt to render him in polygons.

What really makes Minotaur great is that this phenomenal illustration wasn’t squandered on some nobody of a character; Minotaur is the breaking point of the game, the first battle that will utterly destroy you. I fought the guy nine times before I won, often with perfect strategies that failed at that last second through a maddening (but not really unfair; the game operates by consistent rules) quirk of the random-number generator. A memorable design for a memorable moment.

10 thoughts on “The minotaur”