One of the most common theories about Mad Men goes like this: At the very end, Don Draper will kill himself by jumping out a window, ending the show with a direct parallel to the animation that opens every episode. This assumption is pretty likely incorrect for a number of reasons, first and foremost being that the show runners have effectively stated that won’t be the case. They had originally intended Harry Crane to take a sidewalk dive at the end of the first season but decided it was too cliché and melodramatic. I suppose they could end their show with a narrative device they found too corny to use as season-end punctuation, but I’d like to think they’re a little more creative than that. Besides, that assumes Draper is totally beyond redemption. Maybe that’s not the case. 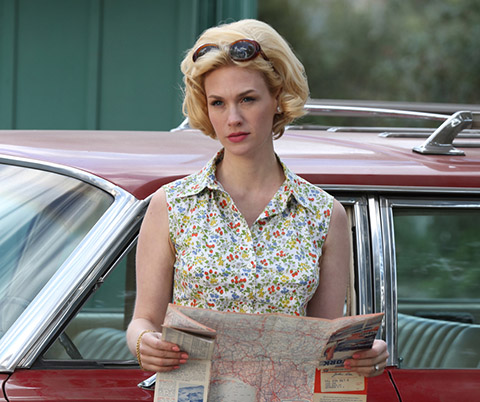 Granted, “The Better Half” features him committing adultery with… his ex-wife, Betty. Which really isn’t very nice of either of them. But as his emotions drift aimlessly in the wake of being abruptly ejected from his previous affair, Betty commits one of the first commendable acts we’ve seen her perform since… what, blasting their jackass neighbor’s pigeons out of the air with a rifle? Normally such a living monument to self-involvement she makes Pete Campbell look like a charity, Betty seems to experience a moment of uncharacteristic compassion and clarity as she lies in the afterglow of infidelity with Don; she expresses her sympathy for Don’s current wife being young and foolish enough to have trusted Don with her emotions and hopes, which clearly stings him and forces him to reconsider things.

It’s a surprising statement given Betty’s cruel sniping at Megan, but in that moment Betty has “won”: She’s back to her fighting weight, men are making passes at her again, and Don is with her rather than the 20-something soap actress he married. Whatever insecure resentment she felt for Megan has faded to irrelevance. And besides, while Don may be casting about in quiet desperation for a replacement mistress, Betty is only in it for the ego balm of a one-night stand, oblivious to their reunion in the morning light as she breaks fast with her current husband. Alone at the diner, he seems to realize at last that maybe there’s no easy fix for whatever emptiness drives him and returns to apologize to Megan for being so distant for so long.

And clearly he has, somewhere inside him, the potential to be a good family man. After staring at his son’s public dinnertime performance of campfire song “Father Abraham” with the same wary disbelief that he reserves for particularly boneheaded client drama, he drops his armor and joins in for second verse. Maybe one of these days he’ll even give a straight answer when someone asks him about himself (or in fact any answer at all).

This theme of longing for the connection of family is echoed throughout the episode, even in its title, and it goes beyond simply the one-to-one relationship of man and wife. Roger Sterling longs not only to get back together with Joan (who apparently is seeing the hilariously forgettable sixth season addition Bob Benson now that he’s proven to be the one genuinely nice man in all of New York) but also to have a connection with the child they conceived together; failing that, he seeks a surrogate in his grandson and does such a terrible job of it that his daughter refuses to let him spend time with the kid unsupervised ever again. Campbell looks for professional reassurance and gets a surprising rebuke to focus more on his family from Duck Phillips, of all people. And Peggy Olson, Duck’s ex-lover (Pete’s too, come to think of it), looks to restore the love connection that she and Chaough nearly shared, failing to understand that the thing she likes most about him — he’s a good person in a sea of corporate amorality — is exactly why they can’t be together, as he’d never leave his wife for her however much he might want to.

Peggy, on the other hand, ends things with her dopey current boyfriend Abe in a horrifying (yet hilarious) fashion, inspiring him to finally come clean about how his rote counter-cultural programming requires him to despise her for her complicity in the corporatization of America. (He’s not wrong, but good lord is he an insufferable ass about it.) The episode ends with Peggy’s place in the new agency once again represented visually as she stands between the office of the boss she loves but who has just rejected her and the boss she despises but who has just praised her. This little staging device has shown up a few times since the merger, but never more obviously here, as she casts about looking back and forth between the two nameplates in uncertainty.

Yes, yes, it’s all a soap opera, but I still don’t think it’s going to end with Don killing himself.

3 thoughts on “The Better Half”