Aliens may have lacked the originality of concept and singularity of purpose that drove its predecessor, but it works well both as a film and a sequel. It definitely feels more “Hollywood” than Alien did, and it also feels far more movie-like — the sets all have a definite “film set” atmosphere to them. Much of what made Alien so compelling was the way its cramped setting created an intimacy bordering on claustrophobia, and Alien features larger sets and a larger cast. It’s deliberately meant to be a bigger movie — Alien amplified to its extreme — and while it certainly succeeds on that front, the result is that it does feel less unique and “real.”

On the other hand, you could make a compelling case that it doesn’t feel unique for the same reason a young teenager would likely be unimpressed by the Beatles: Everyone ripped it off. Everything Aliens brought to the table in 1986 has become a commodity. 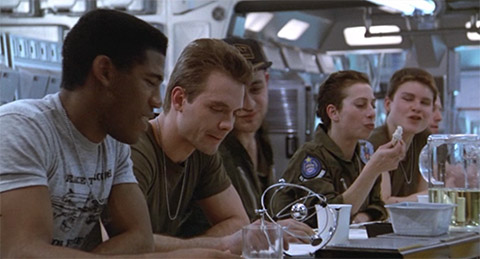 What surprises me on a critical back-to-back viewing of the movies is just how deliberately Aliens duplicates the first movie’s beats. Once you’re past the opening bits that serve as connective ligament between the two plots — an excuse to recast Ripley as a prophet without honor and send her packing back to LV-426 — the Sulaco crew reenacts the final days of the Nostromo step-by-step. They wake from hyper sleep, eat cornbread, grumble about landing on the planet below, and make a tense descent onto the surface. And, as before, there’s ample silence and build-up before the xenomorphs make their debut at about the halfway mark and everyone starts dying. Until the first shots are fired, Aliens even uses a lot of the overlapping naturalistic conversations seen in the first film. Heck, the drop ship pilot even looks like she could be Lambert’s sister.

Still, the two movies operate under a very different tone from one another. Alien is all slasher film, while Aliens very deliberately picks at the then-fresh wound in the American psyche that was the Vietnam War with its expendable grunts sent by corporate interests to die against technologically inferior but overwhelmingly deadly forces. If the first movie is The Texas Chainsaw Massacre as told by 2001, Aliens is Alien as told by Rambo. The Rambo-ness of the film sits astride the politically charged First Blood and the far bloodier approach of First Blood Part II; remember that this was 1986, when action movies were still allowed to have nuance rather than being breathless gunplay and isolated quips from start to finish.

While Aliens‘ sets and cheesy fog machine haze create much more of a typical movie-like feel, they nevertheless work for this specific film. Alien thrived on claustrophobia, the sense that the crew was trapped in a tiny space with an inexorable, implacable monster bent on their murder. Aliens channels the fear of exposure, the sensation of being surrounded with nowhere to hide in a setting the enemy knows best. The ever-dwindling survivors constantly cede ground to their assailants, funneling down into ever-smaller spaces in which they hope to enjoy what little tactical advantage they can gain: From the vast expanses of the air processing center to the halls of the residences to the labs to the security tunnels to the narrow escape hatches, the sets crowd in as the characters try to limit their exposure and amplify their survivability.

On video, Aliens also offers some insight into how director James Cameron metamorphosed from the mind behind the ominous The Terminator and the bombastic glurge of Avatar. In its original theatrical version, Aliens is perfectly paced, building up just the right amount of mystery and dread so that when the aliens finally make their appearance it almost feels like catharsis. Cameron’s director’s cut, however, adds a ton of needless bulk to the movie. Some of it improves the story, like Ripley sadly learning about her daughter’s life and death during her own half-century of drifting through space in deep freeze, but for the most part it just makes the movie feel leaden and unsure of itself. The scene that depicts Newt’s family finding the egg on the colony’s surface isn’t merely unnecessary, it actively damages the film by making the colony more familiar and destroying the uncertainty and build-up that makes the endless gunplay of the movie’s second half feel like such a relief. In other words, Cameron’s only as good as his editors.