If Star Trek‘s uncredited cast member was the starship Enterprise, Mad Men‘s corresponding character is intoxicants. The concept of getting wasted as has grown and developed just as much as any of the series’ principles over the past five and a half seasons, and the most recent episode — “The Crash” — truly brings intoxicants into its own, giving it extensive interplay with the entire ensemble and condensing the motives and neuroses of Don Draper to their intensified essence. 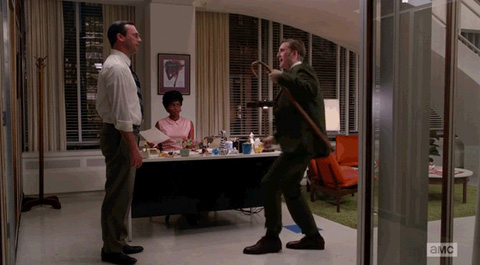 When first we met intoxicants, way back in the pilot episode, it was a supporting cast member, there almost for comedic effect. Can you believe how much these guys drink and smoke? the show seemed to be saying. But just as quickly we came to realize that Mad Men was hardly making intoxicants a heroic character; like the rest of the cast, it proved to be nuanced. One minute it did rotten things like convince Roger Sterling to hit on Don’s wife Betty in their own home; the next, helped Don get his comeuppance by embarrassing Roger.

Over time, intoxicants matured. As quaaludes, it knocked Don into a stupor that allowed a pair of hitchhiking teens to rob him blind. As marijuana, it helped some characters (Peggy) become more creative and ruined the careers of others (Paul Kinsey). More recently, Sterling experimented with it in the form of LSD, and it turned him into one of those people who thinks he’s had a really interesting experience and bores everyone telling them about it.

This episode, though, intoxicants finally got to play the lead. And while it ultimately played second fiddle to Draper’s central role, that’s just par for the course on this show. And, to be honest, it made possible the most cutting insight we’ve ever seen into just what makes him tick. Under the influence of a “pep” injection administered by a “doctor” brought in by Jim Cutler — who, it turns out, is infinitely sleazier and more disgusting than Roger Sterling, so I apologize for making the comparison — Draper spends a tireless, disjointed three days working manically and generally obsessing. (The true nature of intoxicants this time around was never specified, but given the period setting I have to assume it’s some sort of proto-cocaine cocktail.)

Under the influence of intoxicants, Don’s practically a parody of himself. Not the lazy “ha ha isn’t it hilarious how these Mad Men have sex and smoke and stuff” brand of parody, but rather the accurate kind that exaggerates actual characteristics to the point of near-comedy. Don obsesses, ignores his family, sweet talks ladies, confidently proclaims he has the answers and that he can solve the problem at hand with the sheer power of his amazing creative mind. But the problem he’s aiming to solve isn’t the same as the issue at hand for everyone else. As they wonder how to appease Chevy (a corporation that’s quickly proven to have as horrible and abusive a culture as Lucky Strike was), he tries to come up with the ultimate pitch to win back his estranged paramour.

Because that’s the truth of Don Draper: A man desperately in need of validation. He wants to command the respect of his peers, but even more important is the undivided devotion of the woman he loves. And he loves his neighbor’s wife, Sylvia, because she offered him the loyalty that Megan chose to spend in pursuit of her career.

The entire episode is filmed from intoxicants’ point of view: It begins with a scene of drunk men screaming in a car hurtling down a dark road, a disjointed moment whose context isn’t explained for a few minutes. With the pep shot racing through his system, Don experiences lost time and total forgetfulness of conversations and plans. He suffers the near-lucid childhood flashbacks that always seem to accompany head injury or extreme drug consumption. And, at the end, when Don returns home at last to stage his triumphant attempt to win back his estranged lover, he comes crashing to earth with the realization that in his delirious absence his children and home were endangered as a direct result of his bender.

Only Peggy, ever level-headed, seems to speak out against intoxicants. “You have to let yourself feel [loss],” she tells her coworker Rizzo after somewhat reluctantly spurning his sexual advances. “You can’t just dampen it with drugs and sex.”

“Maybe we’re different,” Rizzo says defiantly, then proceeds to have sex with what turns out to be a newly dead man’s daughter — an overly eager young woman who Don had politely rejected (to his credit) a short while earlier. But now that he’s accepted (however begrudgingly) his break from his mistress, chances are good that Don’ll be drifting back to the world of casual dalliances, too. But I suspect his relationship with intoxicants will be downgraded back to “just booze, thanks.”

4 thoughts on “The Crash”