Man With a Plan

Way back in the first season of Mad Men, Don Draper barked at Pete Campbell, “You haven’t thought this through!” It was Don’s attempt to prevent the younger man from revealing his true identity (Dick Whitman) to their boss, which presumably would have sunk Don’s career at Sterling Cooper. It was a power play between the two men, one in which Don was echoing the words of a mistress who had decided to bring their affair to an end. 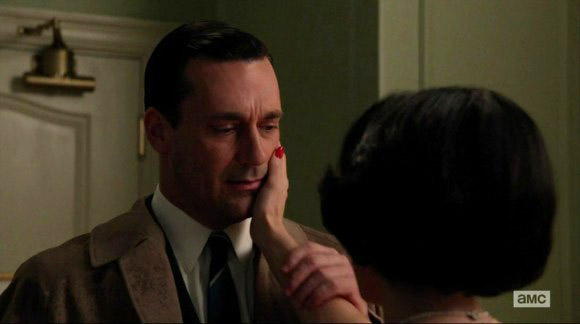 Now, so many years later, so little has changed. “Man With a Plan” sees both Draper and Campbell making desperate power plays in the wake of the SCDP/CGC merger Don set into motion last episode — a conjoining that puts everyone ill at ease. The scent of layoffs lends a spirit of funereal inevitability to the air (a sensation I know all too well from years of personal professional experience), and even those with no need to fear a pink slip — such as the company principals — find themselves on uncertain ground. Draper included. Clearly, he hadn’t thought this through.

In fact, his steely-eyed pissing contest with rival-turned-coworker Ted Chaough gives a lot of credence to the notion that his flash of inspiration to marry SCDP to CGC was in fact little more than a spur-of-the-moment impulse to prove a point by winning the Chevy contract at any cost, just to show up Joan and Campbell. Now that the glow has faded and the reality has sunk in, CCG invades the SCDP offices and the shotgun nature of the wedding becomes apparent. The contrast between Draper and Chaough couldn’t be more stark as Don glides through the office with his usual diffident brilliance and lack of consideration for others, while Ted tempers his rather prosaic approach to the creative process with genuine likability and thoughtfulness.

Naturally, they quickly butt heads, which causes Don to respond with his favorite form of nastiness: Cruel intentions disguised as a friendly business drink. Roger Sterling, having fallen victim to this same two-faced vengeance long ago, probably could have warned Ted that Don’s “olive branches” come with a heavy price, such as vomiting oysters in front of Nixon’s cronies, but he was too busy getting a chuckle out of (hilariously) re-firing Burt Peterson. So Ted lets Don bully him into drinking too much, after which he promptly embarrasses himself in front of creative. (Meanwhile, Don matches him drink for drink yet seems completely unfazed, which makes you wonder just how much he had to drink to get throwing-up sick at the Roger’s mother’s funeral a short while back.)

Peggy, however, is wise to Draper’s vindictiveness and calls him out on it; whatever simpatico they once shared has long since evaporated. Ted takes his own revenge by treating Don to an absolutely terrifying private plane ride, privately getting the upper hand in the relationship, at least for a while. Sensing his role as alpha male threatened, Don asserts his authority by power-tripping in his extramarital dalliance, forcing his paramour Linda to remain in a hotel room for him, submissive and sexually available. He’s so self-involved in his sexual domination that he doesn’t bother to pay attention to the clear signals Linda broadcasts to make it clear that she was interested in an afternoon’s dalliance, not the strange protracted engagement Don wants. Ultimately, Don takes it too far and spoils everything, his demands causing his lover to rethink the entire affair and bring it to what appears to be a final end.

As the end of his fantasy affair dawns on him, too late, Don tries to bully his way through that with words, too. But Linda remains adamant, and Don’s armor shatters in a way that only ever seems to happen when he’s rejected by women. He’s ultimately reduced to pleading. “Please,” he begs, but Linda has decided her marriage is more important than her whims.

As for Campbell, his life here parallels Draper’s in the classically Campbell way. Don worries about his dominance at the company with Chaough co-calling the shots; Pete worries about his future at the company, period, mainly out of pique because he couldn’t find a seat at a meeting. Don’s distracted by his mistress waiting for him in a hotel room; Pete’s distracted by a woman in his downtown apartment as well. Except it’s his senile mother, emasculating him with her occasional lucid insights — a far cry from Don’s sexual power trip, though in the end both men are left frustrated and empty. Campbell’s always aspired to live Don’s (perceived) glamorous life, yet once again he’s more like Don than he realizes.

Meanwhile, Joan demonstrates the one example of true power in this entire episode — the subtle kind of power that runs things behind the scenes. The other partners may treat her as a highly paid secretary, but with a seemingly absent suggestion she salvages a job for a genuinely good man and ends the episode as the one person who truly got their way, with no one the wiser for it.

Don returns in silence to his perfect life with his beautiful young wife, who cheerfully discusses having a wonderful time together, maybe even going on vacation to Hawaii again. And he’s sick to his soul about it, because he’s Don Draper, and “perfect” isn’t good enough to satisfy his miserable, empty heart. As the credits roll, a television broadcast relays the assassination of Bobby Kennedy, and Don sits and stares into space, surely contemplating not the murder of a young presidential contender but rather the sudden assassination of his own aspirations of power — aspirations on a far smaller and more intimate scale than Kennedy’s to be sure, but gunned down with equal finality all the same.

4 thoughts on “Man With a Plan”