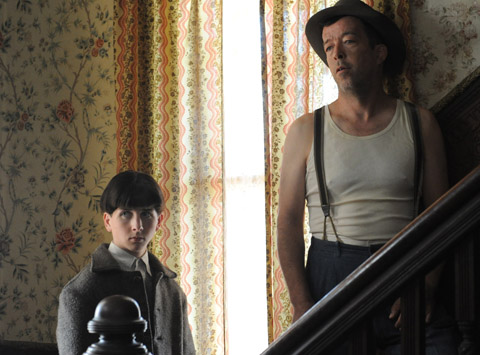 “Sometimes you have to dance with the one that brought you,” ad executive Don Draper tells a coworker midway through “The Collaborators,” apparently oblivious to the irony of speaking about fidelity and constancy when only a few hours prior he had cheated on his own ailing, oblivious wife with his neighbor’s. But this perfectly captures the weird duality that makes Draper so interesting: He’s deeply honorable about some things and calmly amoral about others. Vows of marriage mean little, but always be true to your business agreements (in this case the Heinz beans account).

Then again, maybe the problem is that Don thinks of sex as a transaction. Brief flashbacks to his childhood reveal a few more details of the past Draper acted so stony-faced about when pressed for details in the last episode. As alluded to last season, Don — or rather, Dick — spent his adolescent years living in a whorehouse with his uncle and adoptive mother. Toward the end of the episode, we see him peeping on them in the act of sex, only to be chastised by a passing prostitute. Quite the healthy upbringing.

If the last episode circled constantly around the theme of death, “The Collaborators” centers around the concepts of prostitution (both literal and figurative) and, to a lesser degree, repercussions. When Don sleeps with his neighbor’s wife, he leaves her a wad of bills afterwards — not as payment, but simply because said neighbor had mentioned that they were running short. Yet the implication seems clear, and while Don notoriously has no sense of perspective about money, the eagerness with which his paramour snatches the bills from his hands speaks to the nature of their relationship — or perhaps her side of it, anyway.

Herb, the sleazy car dealer who brought in the Jaguar account in return for a night with Joan and demands the firm follow up their literal prostitution with a figurative sort, insisting they undermine their national campaign by spending the majority of their budget to promote his dealership. Draper, still bitter that his peers sold out Joan — one of the few people in the series he genuinely respects — to Herb behind his back, rises to the occasion by completely undermining the client’s self-serving pitch to his superiors in the process of ostensibly trying to sell it. It’s an interesting reversal of Draper’s usual pitch savantism; where he normally falls on elegant emotional monologues or pure intellectual inaccessibility to coax his clients to agree to his campaign ideas, here he turns to his Midwestern roots, “naïvely” painting so unappealing an image of the concept that the urbane heads of Jaguar politely but firmly indicate the idea is completely off the table.

In truth, Draper is as terrible a businessman as he is a husband, and Pete Campbell’s reaction to the abortive pitch makes this abundantly clear. Campbell proved all too willing to sell out the company’s integrity to retain the Jaguar account, and his willingness to play ball comes off as sleazy compared to Draper’s self-righteousness. But when elder statemen Sterling and Draper compare Pete’s eagerness to give clients what they want to the Munich Agreement (with scummy Herb playing the role of the Nazis) he huffily reminds them who won the resulting war.

As ever, Campbell’s childishness belies a cutthroat business acumen; he’s a predator undermined by his own immaturity and insecurity. His barbed remarks to Draper last episode suggested that perhaps, at last, he was finally budding into the ruthless shark he’s always aspired to be; yet his B-plot this time around indicates that he still lacks the relaxed composure that makes Draper seem so much more self-possessed. As Don coolly conducts an affair right beneath his wife’s nose, Campbell makes use of his Manhattan love nest to cheat on his wife Trudy for all of a few days before she wises up and demands a divorce. He’s perhaps the most inept philanderer imaginable, continuing to exist as a pale, grating shadow of Don’s worst habits.

Still, miserable as he’s destined to be in his personal life, he’ll be a business survivor. I’ve joked about Mad Men ending with a flash-forward to the ’80s, where Don is a balding, coked-out ad executive dripping with Gordon Gekko sentiment. On second thought, I think that would be Pete, if only he weren’t too wholesome to abuse any sort of drug.

Meanwhile, Peggy Olson (providing the episode’s C-plot) continues to channel Don the professional, but she’s rewarded not with the admiration afforded to her mentor but rather the resentment of her underlings. Even her ostensibly supportive boss chuckles at a meanspirited, sexist prank directed at her. We’ll simply refer to her storyline as “tropes vs. women in advertising,” as it continues to dispense the all-too-true lesson that women in business have to work twice as hard to rise half as high as men, and for thanks all they get is men calling them “bitch.” To Peggy’s credit, she’s much thicker-skinned than the skittish girl at the show’s beginning. Her response to the prank is to get angry — not at being insulted, but because her underlings never seem to demonstrate such creativity when it truly counts.

The Tet Offensive serves as the backdrop for this episode: The moment at which the Vietnam War took a terrible nosedive for the U.S. This would seem to be a bit on-the-nose considering all the unpleasantness that goes down this time around, except things are always taking a nosedive on Mad Men. Conversely, the best attack on the fourth wall comes from Don’s wife Megan, who in the midst of describing her soap opera’s television to her husband’s paramour, confesses that she had recently miscarried a child.

“No, I mean in real life,” Megan sobs. But at this point in the series, the line between “reality” and Megan’s daytime soap seems awfully thin. If only every soap were as smartly written.

9 thoughts on “The Collaborators”