Well, a new season of Mad Men is assaulting the airwaves, which means that you’ll have to put up with me opining about the series for the next 12 weeks. Alas. 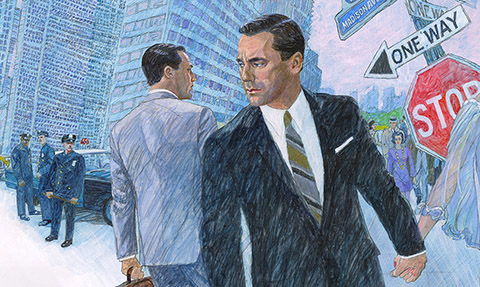 The promotional poster that went out a few weeks back for the latest (and penultimate?) season of Mad Men offered a provocative image in a striking style: A classic ’60s drybrush painting of dual Don Drapers, one in white carrying a suitcase and one in black holding the hand of a skimpily dressed woman who may or may not be his wife Megan (presumably “not” since the purple-clad lady framed between their arms in the distance certainly looks like Megan). The symbolism seems a little on-the-nose thanks to the street signs in the background, but the first episode suggests it’s less “good Don/evil Don” and something a little more nuanced.

The first episode’s title, “The Doorway,” reflects the duality in the poster’s imagery; after all, the Roman god of doorways, Janus, was depicted as a two-faced deity. Almost certainly not coincidentally, the episode transpires over the New Year holiday 1967 and ends at the beginning of January 1968, the “doorway” month that takes its name from Janus. Classical references always warm the heart.

The entirety of the episode feels almost like an out-of-body experience for Don; in practically every scene that features him, he’s less a participant than an observer. He watches his wife dance with a flirtatious Don Ho-alike in Hawaii; gazes out his office window and longs for summer climes; peers at the memorial service for Roger Sterling’s mother through a haze of alcohol. Later he rings in the new year by committing adultery with a friendly neighbor’s wife and expresses his revulsion at his compulsive behavior.

Clearly, when Don helped Megan return to acting at the end of the previous season — she’s now an up-and-coming soap opera character actress — he loosed his hold on the anchor that seemed to be keeping him stable. Now he’s drinking too hard, sleeping around, and flirting with the concept of death. There’s a strange, seamless flashback to his building’s doorman suffering a heart attack as the Drapers return from Hawaii, which Don later references by asking the doorman what he experienced when he died. “Was it like warm sunshine on the beach?” he asks, echoing the scene where he stares out his office window while reflecting on the sounds of the ocean. This in turn seems like a deliberate callback to the series’ pilot episode, where the sounds of combat in Korea splashed faintly over the sight of Don napping in his office while struggling to find inspiration for a Lucky Strike campaign (with further referential reinforcement coming in the form of Don’s bar encounter in Hawaii with a solider getting married while on leave from Vietnam). Later, he offers an ad campaign whose imagery hints at tropical suicide, evoking James Mason at the end of A Star is Born.

The days of Don shilling for Lucky Strike seem a long time ago, but Don hasn’t really changed all that much since then. Unlike everyone else in his office, he wears the same suits in the same style as ever. The younger SCDP employees have gone hilariously beatnik, with unkempt beards and flashier, more casual clothes; the partners still dress in their usual suits, but Campbell and Sterling both wear sideburns now. If anything, Don has regressed, and he’s clearly feeling increasingly irrelevant, struggling to make sales pitches and charm clients… whereas his former protege Peggy has basically become the new Don. Hell, her dialogue is pretty much just old Don Draper lines. “When you bring me something like this, it’s cowardice.”

And so Don drifts through this episode, again experiencing its events almost as if they’re an out-of-body experience. “The Doorway” begins with a first-person view of someone undergoing CPR as Megan screams in the background; while this could be another flashback to the doorman’s cardiac arrest, it could just as easily be a flash-forward to Don having a heart attack as well. After all, that teaser poster vaguely recalls the cover to the Beatles’ Abbey Road, where John wore white and Paul walked barefoot, sparking all sorts of rumors about one or the other of them being dead.

There’s some other stuff, too — Roger seeing a shrink, Betty being completely insane, some new dude in sales who’s a complete schmuck — but whatever. It all seemingly leads to a very dark place… maybe a dark place with a distant light at the end of the tunnel. Like warm sunshine on the beach.

7 thoughts on “Mad Men: The Doorway”