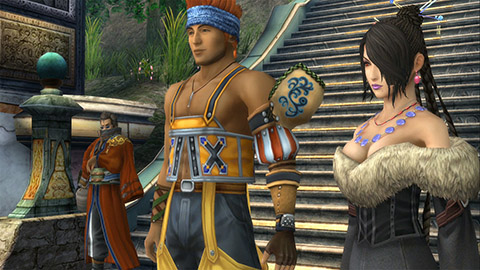 Surprising no one, Square Enix has announced the Final Fantasy X and X-2 HD Remaster edition for the U.S. Unexpectedly, they’re still doing the split release for Vita that they had announced for Japan. I figured they’d be sensitive to the fact that Americans are a bunch of tightwads who demand the right to belly up to the buffet for as little money as possible, and not just where food is concerned. But no!

Now, you might think the greatest appeal to this release is the fact that in high-resolution we can finally appreciate just what a bizarre mishmash of character designs Tetsuya Nomura slapped together for this game; I mean, just look at that trio up there. Bondage goth queen, leiderhosen sports clown, and ghost samurai: Together, they fight Sin! Or maybe that they’ll redo the laughing scene that everyone seems to hate because they miss the point. But, again, no.

The real interest here comes from the fact that this will mark the first time the International Version of any Final Fantasy has reached our shores. The International Version tradition began with Final Fantasy VII, when Square added in a bunch of extra bosses, backstory exposition, and CG for the U.S. version of the game (likely because the Japanese release had turned out slightly rushed in light of the game’s ludicrous-for-the-time scope). Grossed out by the prospect of leaving money on the table, they rereleased the slightly expanded U.S. version in Japan. So technically, I guess we have received an International Version before, even if it wasn’t named as such.

The later International Versions, however, began in earnest with FFX, and added all kinds of interesting new content. I’m particularly drawn to the FFX-2 remaster, because among other things it includes a crazy new job class that references the SeeD uniforms of Final Fantasy VIII and I always appreciate when the Final Fantasy guys sheepishly admit they even made FFVIII. Truth be told, I actually never bothered to play through X-2 despite liking it in the abstract because by the time I had a chance to make space for a playthrough in my schedule the International Version had already been announced and I felt put off by the whole sad affair. So this will be a new experience for me.

Of course, the best thing Square Enix could possibly do now is follow this up with Final Fantasy XII International Zodiac Job Version HD Remaster. But we all know better than to expect truly perfect things from life. So I’ll settle for having both the entirety of Persona and Final Fantasy I through X-2 on a single Vita memory card. Speaking of which, Square, get your act together and make Final Fantasy V playable on Vita already. Love you, thanks.