Today, alas, is my birthday, and I don’t even want to say how old I am now because it’ll make me stop and stare with alarm at my computer screen and wonder how on earth I’m still writing about video games at this point in life. Instead, I decided to celebrate my origins by clinging to the past: I dusted off my vinyl copy of Rush’s Moving Pictures, plugged in the phonograph for the first time in years, and gave the album a listen. 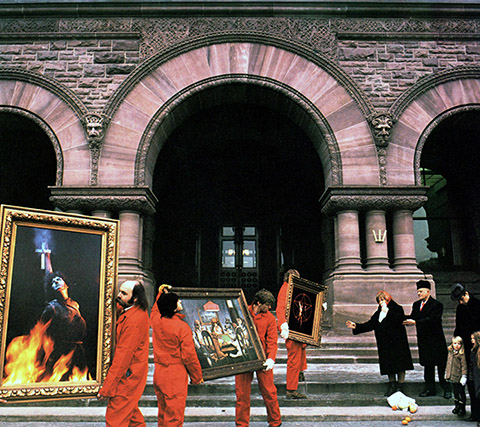 That was the intent, anyway. Unfortunately, the record player seems to be in need of a new motor or something. It’s making strange grinding noises and playing back the album very slightly too slowly, so everything sounds distorted and out of tune. And thus it quickly became a far more apt metaphor for aging than I ever could have imagined.

Rush probably isn’t the best bad to accompany the aging process anyway. It’s too bright, too forceful. I’m old and need my quiet. Plus, have you heard Geddy Lee sing lately? Talk about the aging process. All those high notes in the band’s back catalog have become the bane of his existence.

Nope, it’s back to smashing my head against Van Der Graaf Generator some more. Those guys never cared about being in tune in the first place.

Every time I watch this video I love it even more. This was televised, once! Can you even imagine 24 minutes of uninterrupted this? Especially the three solid minutes of a guy sitting at an electric organ playing long, sustained notes? So amazing. Really makes you sad that TV has to be commercially viable and appeal to more than a few dozen people now.

800 channels on my cable box but still not a single one dedicated to prog rock clip archives; and yet, people still talk about “human progress” with a straight face.

Edit: I realize no one’s going to watch that embed all the way through, so skip to 22:00, the point at which Peter Hammill’s contributions to the song wrap up. He quaffs a glass of wine, toasts the camera man, and wanders offstage to savor both the drink and the way he and his retinue have managed to singlehandedly destroy the commercial viability of the entire Belgian broadcast system. That is why I keep listening to this band.

11 thoughts on “That escalated quickly”