I posted about Hasbro’s new fake-Lego line of G.I. Joe-themed figures and playsets a few days ago, yeah? Well, I’ve been opening one of the dozen blind bags in the set per day since then, and today I ripped open the last of them. Pleasantly, it turned out I had randomly, unexpected, unwittingly saved the best for last: The Adventure Team Commander.

This guy is amazing. 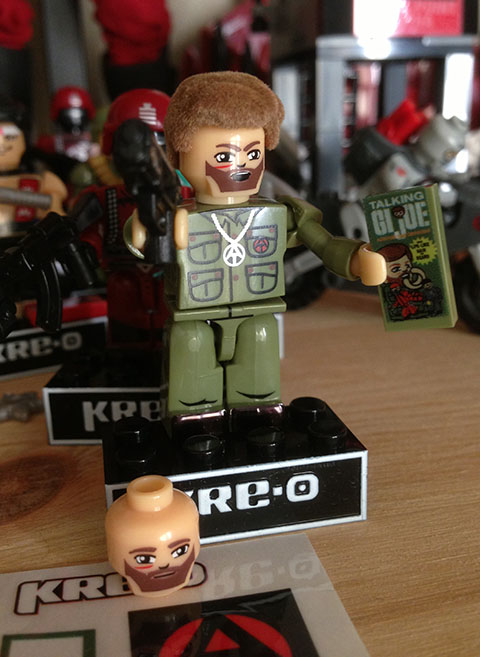 He stands out from the rest of the set for a few reasons. One, he’s designed not in the style of the ’80s-era Fury Force reject line ofStar Wars-scaled G.I. Joes but rather in the style of one of the 12″ figures from the ’70s. Between “classic” G.I. Joe and the ’80s reboot, Hasbro tried to keep the line alive despite America’s heartsickness over Vietnam by downplaying the line’s military origins and casting Joe as a member of “the Adventure Team,” fighting Yetis and stuff.

So, this guy is part of all of that. But look at the details! His face has the classic G.I. Joe scar on the right cheek, and he’s wearing a groovy Adventure Team pendant (because it was the ’70s). He has two different head designs, one normal and one shouting in the style of his box illustration — which box, weirdly (yet awesomely), he’s holding as an accessory.

The best part, though? His hair piece is flocked, just like some of the the original G.I. Joe figures had. So, basically, this is a very precise 1/6 scale replica of a 1/6 scale figure. It’s meta. And… fuzzy.