I sent this off to proof today 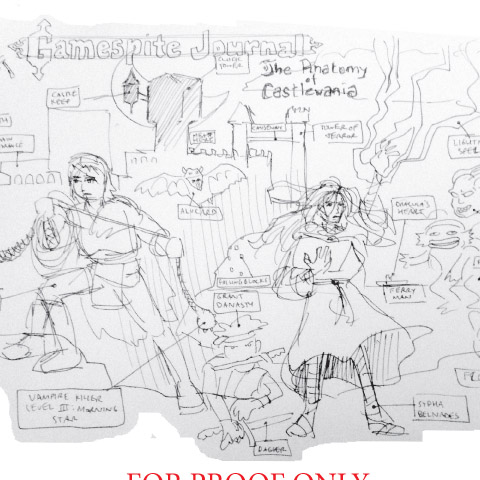 Obviously, it’s not done, but the text inside is, and that’s what I really need to proof.

I think I need to do quite a bit of refining on this image. It started out serious, with Simon and Sypha looking dramatic in front of the castle. Then I doodled in Grant pulling himself up over a cliff edge with a dagger in his mouth, which was a little less serious. Then I decided Alucard’s bat form differentiates itself from Dracula’s by wearing a little tuxedo front and bow tie. Once the Fish Man and the labels showed up, the tone of the piece had changed dramatically.

Anyway, I have to make this cover awesome, because Bill Mudron has contributed an image to the back cover, and that’s a tough standard to live up to.

Whatever happens, I’m keeping the GameSpite logo as it is here.

7 thoughts on “I sent this off to proof today”