Trek Trek: Defiant to the end

I guess I was wrong about no one liking my Enterprise posts. So the lack of comments and drop in traffic every time I posted about the show were a strangely consistent coincidence. Hmm.

Surprisingly, the most important episodes of the entire final season of Enterprise, from a bigger picture perspective, were the two I least expected to like: The mirror universe two-parter. The mirror universe theme was novel but quickly became played out, and Enterprise already explored an alternate universe at the beginning of the season. Did we really need another?

The answer turned out to be “not really,” but I’m glad they went ahead with it anyway. The redeeming plot twist: An anomalous discovery made by the evil Enterprise crew wasn’t their counterparts from the normal reality as I expected, but rather the U.S.S. Defiant, lost in both time and reality. Not only was this a neat nod to an actual plot point in the original series episode “The Tholian Web,” where the Defiant vanished into a space-time rift never to be heard from again, but it also did a great deal to legitimize the relationship between Enterprise and the original series.

The masterstroke was the way it played the whole thing totally straight. A lot of people complain about the aesthetic differences between Enterprise and the ’60s episodes — how could tech revert back to analog computers and clean, simple ship geometry? But the mirror-Enterprise crew takes over Defiant and just rolls with it, making use of the garish uniforms and blinking panel lights and that crazy science viewer type that Spock always peered through. They switch over to classic communicators and Type II phasers and walk through those bright red doors as natural as day. Aside from a single snide remark about the puke-green captain’s tunic — which, let’s face it, has always looked kind of gross — Enterprise took the aesthetics of the original series as face value. 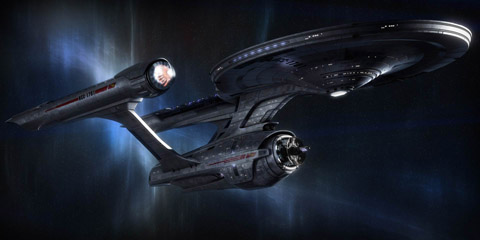 The show runners could have reenvisioned the Defiant to look like this, but thank god — they didn’t.

And it works, because the characters regard the Defiant with barely restrained reverence. It’s clearly the product of technology a century beyond their own, and it’s treated as this sort of ultimate juggernaut of space technology — which is exactly how it should be. It made me respectful of the elegant power inherent in the ol’ Constitution class for the first time in years. I loved the way the exterior shots of the ship were composed as tight crops underscored by a deep, thrumming sound, as if the starship contained too much power to be contained in the same frame that normally presented the NX-01.

Of course the Defiant‘s control surfaces are covered with obscure lights and switches — the tech is so far advanced it doesn’t need to work the way Enterprise‘s near-future devices do! Of course it’s streamlined and sleek — it’s the product of a more advanced society that doesn’t need superfluous detail to express the concepts of speed or power. After the series moved back away from the mirror universe, it made me more aware of how thoughtfully the NX-01 had been designed to seem workmanlike and unfinished: the utilitarian spaces, the unadorned elements of internal structure lining the ship. In other words, despite having nothing to do with the core Enterprise plot line (and featuring the hilariously awful sight of Scott Bakula trying to play “evil”), the “In a Mirror, Darkly” two-parter made both Enterprise and Trek as a whole better. That’s quite a trick.

I’m sad that the series ended before it had the chance to explore the charting of the Federation in more detail, and before it could explore the Romulan war, and all the other backstory concepts it clearly was aspiring to develop. But they managed to do a bang-up job within the limited space they had, and as other shows have proven time and again it’s always best to go out on a high note. I think it was Rick Berman who recently made comments about how the show would have spent an entire season in the mirror universe and revealed the “future guy” sabotaging the past during the Temporal Cold War to be an older Archer, both of which sound like terrible ideas. Someone somewhere has suggested that if you combine the four seasons of Enterprise with the three seasons of the original series you get a seven-year saga the same as all the other Trek spin-offs… and you know, it works.

Anyway, let the record show that I went into Enterprise with a defiant sense of reluctance — I’m going to watch this even though it’s not very good — and came away totally enamored with the show. It didn’t just exceed my expectations lowered by years of Internet deprecation; it blew away anything I could have imagined when the series first launched in 2001. Paramount will begin issuing the series on Blu-ray soon (probably to buy time for them to remaster more Next Generation episodes), and you can bet I’ll be showing my support for the series by picking them up… yes, even the mediocre season one and two.

The one downside to Enterprise‘s unexpected excellence is that it’s made me like JJ Abrams’ take on the franchise a bit less. When I saw the movie, it was with the mindset that the people behind Trek and the corporate machine responsible for its creation had lost sight of its original spirit and how to express the series’ concept in not-embarrassing ways. But clearly that’s not true, and Enterprise seasons three and four stand up to the best we’ve seen in 50 years of the franchise.

Old school Trek can still matter. Maybe not in the current Hollywood climate, but eventually. The way Enterprise proved its mettle and earned its right to tackle familiar, classic Trek elements could happen again with the right talent behind it. Moreover, it highlights why I worry that Benedict Cumberbatch’s mysterious villain in Star Trek: Into Darkness will turn out to be Noonian Khan Singh. Khan worked in The Wrath of Khan because of his history with Kirk, and because of the inequity imposed on the two characters by passage of time. Chris Pine’s Kirk arguably doesn’t even deserve to command a starship, let alone face off against a character made compelling by his lengthy history with the protagonist.

Also, Trek ’09 turns out to be made from plot snippets swiped from Enterprise: For example, the Narada takes the place of the Defiant in the mirror universe episode as a temporally displaced supership that upsets the balance of galactic power. Heck, even the movie’s attack on Earth via San Francisco looks like a recycled shot of the Mars energy array whiffing an attack on Starfleet Headquarters in “Terra Prime.”

Oh well. I’ll still watch Into Darkness and quite likely love it, but it’ll be with a nagging sensation at the back of my mind that it’s just a glorified mirror universe episode that doesn’t really matter in the long run.

12 thoughts on “Trek Trek: Defiant to the end”