You thought you’d make it through the weekend unscathed. You thought wrong, dude. 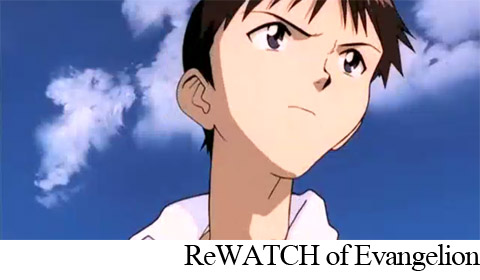 Episode 3 is a character development episode. In anime terms, that means “personal growth spurred by wild contrivance.” Shinji begins exactly where episode 2 ended, though clearly some time later — not as a cliffhanger note, but simply a callback to the previous episode’s events and a clear signal that, oh yeah, this show is definitely gonna have some continuity.

What we learn here is that Shinji is basically a teenage zombie who doesn’t give a rip about much of anything and is content to robotically pilot his Evangelion unit because that’s what he’s been told to do. It’s easier than actually thinking for himself. Silly Shinji, you’re inside the robot, you’re not supposed to be the robot. 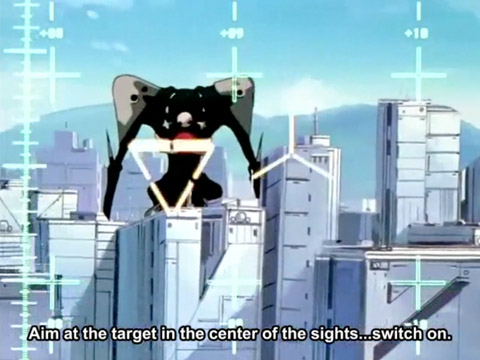 Beyond that bleak little introduction, we see more of that world detail I like so much as Gainax paints an image of a human race barely holding on to normality. I mentioned in a previous episode piece that the world seems incredibly stark and barren, particularly the NERV complex, to which someone replied, “That’s just Gainax being constrained by budget limitations.” Maybe, but they really rolled with it and built it into the larger framework of the series. Shinji drops off his and Misato’s garbage for trash day as he heads off to school, allowing us to see that theirs appears to be the only occupied unit in the entire building. 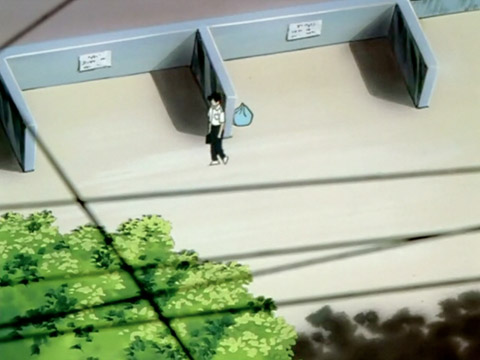 They live alone in their complex; no one else dropped off garbage for pick-up. It’s a throwaway detail, but once you notice it you realize just how desolate and sad this world is. It’s a metaphor for Shinji! Or not. But the discussion between Misato and Ritsuko about Shinji’s difficulties adjusting to his new home — a two-way voiceover atop his solitary morning walk to school — I think works nicely to show and tell a bit of character-building exposition in a simple, effective manner.

Shinji doesn’t stay isolated at school long, though, since he lets slip that he pilots a big robot. Everyone else finds this a lot cooler than he does. Notably, the ladies find it a lot cooler. 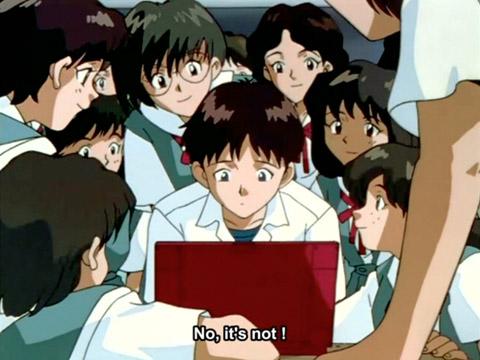 This is where the secondary cast starts to work its way into the plot, with a pair of (male) classmates who resent Shinji because one of them is a military otaku who is deeply jealous that the new kid is a real-life Hikaru Ichijo while the other is pissed because his sister was injured in the giant Eva/Angel dust-up that annihilated most of Tokyo-3 and blames Shinji for not being more careful while protecting humanity from extinction. So Shinji gets a punch to the teeth (actually two punches) for going to the trouble of being manipulated by his father to save the world at great personal pain.

Rei, meanwhile, is not impressed by any of this — not his piloting skills, not his bloody mouth. Apparently she’s still annoyed that he was so spineless they had to drag her out of the hospital to cringingly almost-pilot Unit 01.Understandably so.

There’s a bit more exposition going on in these scenes, in a fairly easy-to-miss fashion: While everyone gawking over Shinji’s possession of the keys to the Eva, the elderly homeroom teacher blithely babbles on about Second Impact and the changes that have transpired across the world over the past 15 years — up to and including the loss of half the human race, along with a startling amount of wildlife. No wonder no one’s dumping trash in Misato’s place. Still, Yebisu continues churning out canned beer. Life must go on, you know.

At this point contrivance kicks in and the episodes plot threads come crashing together as a second Angel attacks Tokyo-3 the very moment Shinji takes a fist to the kisser. And, by an amazing coincidence, Shinji’s two classmates decide to duck out of their apocalypse shelter and get a peek of the battle transpiring nearby. Aaaand Shinji turns out to be kind of terrible as a pilot when the machine isn’t fighting his battles for him… 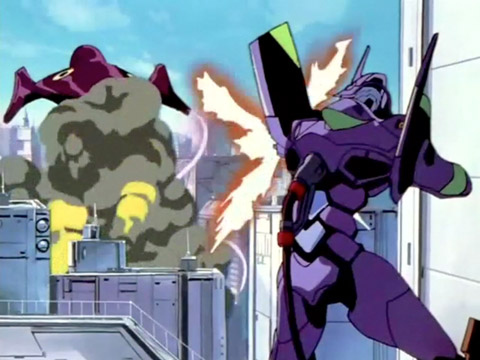 …and promptly gets trashed. In a totally realistic and not at all forced turn of events, the new Angel chucks Eva Unit-01 outside of the ring (the city is the ring in this metaphor) where it lands right next to Shinji’s classmates. Well, “right next to” doesn’t quite describe it. Better to say “on top of.” As in, directly between Unit-01’s spread fingers. 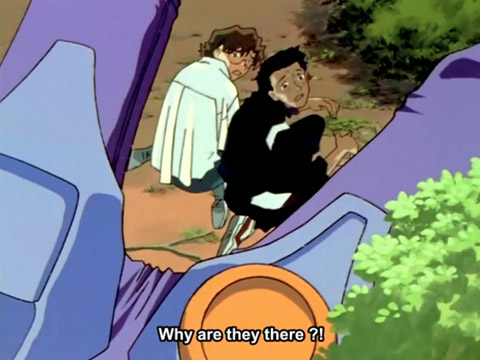 What luck! Imagine the odds.

Of course, Shinji brings them into Unit-01, saving their lives and the day, allowing them to understand the hardships of being an Eva pilot, and everyone lives happily ever after. Alright, just kidding about the last part.

Despite the narrative convenience of the Aida/Suzuhara bit, the second Angel battle is definitely the highlight of this episode, and not just because yeah man it’s totally sweet when giant monsters fight. Each and every Angel encounter in Evangelion plays out differently, and in the process grants a better understanding of the series’ subtexts.

Being the second Angel encounter, the fact that it resembles the first in no way whatsoever — it’s a strangely insectile creature, almost like something from Ultraman, with whip-like appendages that appear to be made of pure energy — is in itself significant. But we also see that Shinji really isn’t a natural hero, as he arguably performs even worse here than in his first battle. And, amusingly, NERV has already accepted a standard anime cliché as the status quo: Sub-commander Fuyutsuki cracks a joke about the military’s efforts to rebuff the Angel being a waste of taxpayers’ money, happily assuming the results of the first Angel skirmish hold true for subsequent battles. 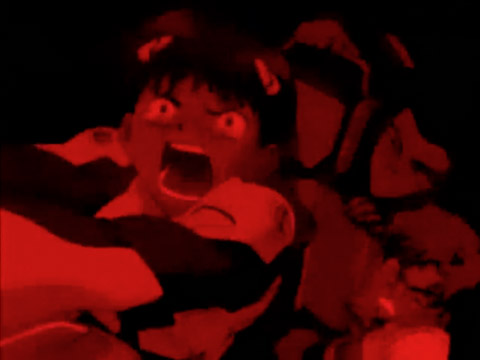 And, ultimately, Shinji wins this time not because the Eva goes berserk but because he does. He flips out, disobeys orders, and effectively does a suicide run at his foe until one of them gives out. Unlike the presence of his classmates, this doesn’t seem at all contrived; only three episodes in and already the story has harshly beaten him down again and again, and while he acts all meek and passive and accepting about it you easily believe that this fury has been bubbling inside of him and found expression in a giant alien-slaying knife.

Shinji can be hard to like at times, but looking at the series anew, I think these rare, raw moments of anguish may be the key to what makes him ultimately sympathetic. He’s not so much milquetoast as lacking support or direction, and while this normally manifests as sulkiness occasionally it takes a more expressive form.

Anyway, an effective (if rather too tidy in places) episode. Onward!

3 thoughts on “ReWATCH of Evangelion:03”