Just as every contemporary adult has in their past some embarrassing yearbook photo of themselves sporting a ludicrous, feathered-to-death ’90s hairstyle or wearing a Cheap Trick T-shirt because they didn’t realize it was yearbook photo day, every game publisher that’s been around since before the ’80s has a Pong clone. Magnavox had one. Nintendo had one. Atari had a bunch, and they invented Pong! So naturally, Sega had one, too.

Very little about Sega’s iteration stood out from the competition. It ran on a discrete logic board rather than an integrated circuit chip. Its colors consisted of “black” and “white.” Unlike vanilla Pong, though, it had the word “Tron” at the end of its name, nearly a decade before the Disney movie! And… well, honestly, that’s about all the information the Internet will yield on the game. Who programmed it? Who spearheaded its development? That information seems to have been lost to time.

But no matter. Pong Tron’s importance has nothing to do with its play mechanics or innards or creators. It matters entirely because of what it represents in the chronicle of Sega’s history: A move from more primitive amusements like jukeboxes or simple mechanical arcade and into the realm of true video games. 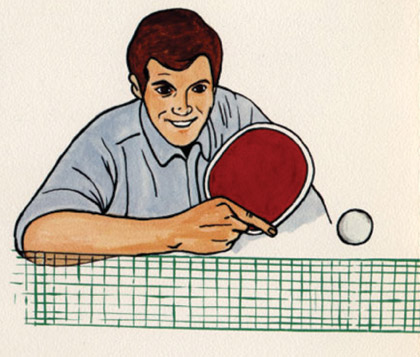 Sega games prior to 1973 consisted of simple mechanical target galleries and things like a pinball table with a front-mounted steering wheel that could maneuver a toy car over a reel of printed “road.” And these things continued to exist for several years after Pong Tron’s debut, too, as the arcade industry slowly began to phase over to electronic amusements as manufacturers figured out how to make video games that offered more to do than simply bounce a block back and forth.

Sega, then, jumped on the video revolution at the station. Pong Tron arrived in 1973, less than a year after Atari’s Pong made its debut. And, like Atari, Sega’s programmers began exploring iterations on the basic concept: First a sequel (Pong Tron II), then other sports (Hockey TV, 1973), then mechanical game concepts turned into TV games (shooting gallery Bullet Mark, 1975, and boxing title Heavyweight Champ, 1976).

From that me-too beginning, Sega eventually mastered the dark alchemy of game design, blossoming into a world-class arcade game designer and distributor. While its early creations never saw the explosive success of big hits like Space Invaders, Pac-Man, or Donkey Kong, slow and steady won the race for them.

Sega’s mighty arcade legacy fueled its move into console development, where it remained a first-party powerhouse just shy of two decades: A feat as yet unmatched by anyone besides Nintendo.