“I respect the chemistry.” 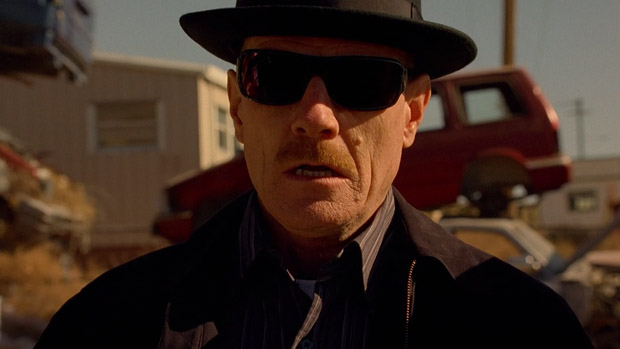 I finally heeded the demands of the Internet and began watching Breaking Bad this past weekend. It was… a slow burn. Unlike Mad Men, where I hung on every word from the beginning of the pilot episode, Breaking Bad would pull me in before letting my interest fall adrift for a while.

Currently I’m a few episodes into the third season (and incidentally, if you spoil anything beyond that for me, I will jack you up) and it’s finally clicked. It was at the very last minute of the second season that I finally “got” it. Breaking Bad‘s strength is not in its crisp dialogue and multilayered episodes but rather in the development of the bigger picture. The second season began with a montage of enigmatic images — a charred teddy bear floating in protagonist Walter White’s swimming pool, men in biohazard suits retrieving evidence samples from the yard (Walt’s glasses among them), a spiderweb of shattered glass spanning the width of Walt’s car’s windshield — and constantly iterated on them, building and leading the viewer to expect something terrible to happen to Walt. And in the end, it all turns out to be the result of something that had nothing to do with Walt: An airline disaster in the skies of Albuquerque.

But after the initial sting of betrayal (nothing’s worse than a long-term red herring), it sank in: The crash had everything to do with Walt. The planes involved collided because of human error on behalf of an air traffic controller. The controller screwed up because he was grieving for the death of his daughter. His daughter died of a heroin overdose, which she succumbed to because the presence of Walt’s partner in crime in her life caused her to fall off the wagon after 18 months of sobriety. And the two would never have come together if Walt had dragged him into his harebrained scheme to make some quick money selling meth.

This seems to be the shape of Breaking Bad: Escalating events, seemingly minor or disconnected, that spiral out of control like ripples cascading across the surface of a pond after some dude chucks a huge rock into it. So I’m hooked, and curious to see where it goes from here.

And it’s a totally different kind of appeal than Mad Men. Not only in its focus on the grander scheme of things rather than intricate minutiae, but also because Mad Men presents the familiar (contemporary human issues) in the context of the alien (life in the booze-soaked 1960s) whereas Breaking Bad presents the alien (a normal man descending into criminal megalomania) within the mundane and familiar (I grew up in West Texas and visited New Mexico at least once a year for the entirety of my childhood). I will take them as complements and enjoy them both.

But I hope you’ll understand if I admire Mad Men‘s sense of fashion a bit more.