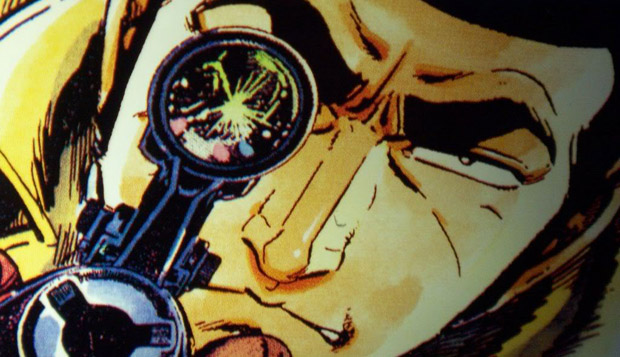 I remember when I first heard about Golgo 13: Top Secret Episode; I had owned an NES for only a few months, and one of my early adopter friends was gushing about this crazy game he had played where you shot people and smoked cigarettes for health. To my adolescent mind, it sounded entirely too titillating to be real! But I didn’t actually try the game for a couple of years, because it came in this horribly ugly silver box and the screenshots on the back were terrrrrrrible. When I finally played it, the action was even worse than I expected; the standard A and B button functions were reversed and the controls were loose and the whole thing was just a surreal mess. Gross!

By that point, Viz had published the first issue of its Golgo 13 game tie-in manga, which I snagged at the convenience store located halfway between my school and home. I acquired both around the same time and realized that the comic was much older than the game — I could recognize back then that it had a hopelessly 1970s look to it — and began to develop an inkling that the game was based on something much larger than it seemed (and something that was all but inaccessible to little me). Before I knew what Ninja Gaiden was, here was a game steeped in a genuine narrative. A dense and opaque narrative at times, it’s true. And laden with some crummy gameplay. But such diverse gameplay! With a plot and a spy mystery!

Sometimes ambition and effort are enough to make up for technical failings. I’m not sure Golgo 13 quite clears that threshold, but it doesn’t miss the mark by far.