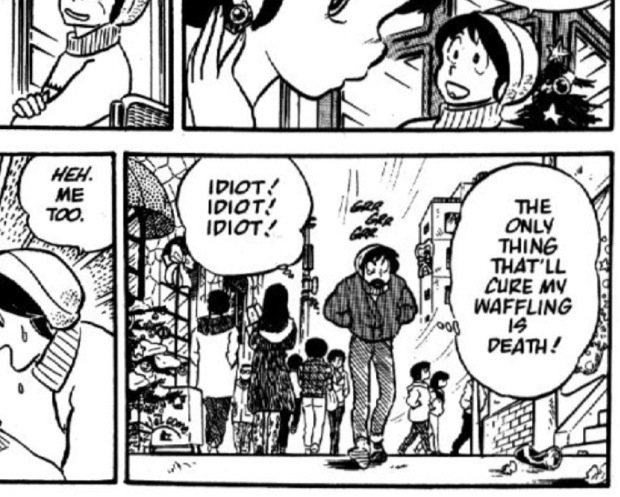 Sixteen years ago, as I wandered the streets of London on a two-day layover between Prague and Texas, I happened across a comics store near (I believe) the Museum of Natural History. I didn’t have much money on me, so I could only pick up a couple of books. Tempted as I was by the amazing-looking X-Files manga (which I still regret passing up), I do think I made the right choice by instead buying the first two volumes of Maison Ikkoku. It became an instant favorite.

I haven’t read MI for more than a decade; the last time I looked through it, the girl I’d been dating had just dumped me and I basically revisited MI so I could wallow in misery and feel sorry for myself. I randomly started re-reading it last night, and I have to say it’s a wildly different experience than before. In the past, I read it as a sweet but strained and needlessly contrived soap opera. Now, I’m not so sure.

The difference is entirely mine; MI itself is still exactly as it was before. I almost don’t have to read it, honestly. I remember the gags, the expressions, Gerard Jones’ witty and mercifully non-literal translation, the story beats, the layouts. But today I look at these elements through a different lens: One older, more aware of the nuances of relationships, and better capable of understanding the distinct and fleeting moment of a very specific culture and instant in time in which the story was set.

Between MI and Mad Men, I seem to be drawn to tales of change and uncertainty of late. It’s probably a coincidence, but I suppose I could make a convincing case for a more deeply rooted reason as well. The year has been filled with loss and upheaval for me, and just as I turned to MI for its resonance with my romantic heartache in the past, maybe I’m drawn to it for its greater themes of change, maturation, and determination now. I don’t know. I just write these blogs, I don’t have to rationalize them.

Like I said, Maison Ikkoku is set against a backdrop of cultural transition not entirely unlike Mad Men. The 1980s in Japan weren’t a perfect parallel for 1960s America, but both represented something of a golden age for each society in which social roles were changing radically as prosperity and optimism spread only to be shocked into submission in the following decade (by Vietnam and the oil crisis for America, the collapse of the Bubble Economy in Japan).

MI isn’t as conspicuously set up to be a morality play about its setting as Mad Men, of course, because it was a product of the time in which its story was set rather than a critique insulated and informed by 50 years of hindsight. Nevertheless, the shifting mores of its culture define the shape of MI’s tale and lend much-needed context to the central relationships around which the tale pivots. Factors like social standing, propriety, expectation, and self-censure guide the characters’ actions in a way that likely wouldn’t be the case today. These things didn’t ring true to me and my limited perspective a decade ago, and from what I understand I don’t think they’d really resonate with modern Japanese youth, either. But MI was authentic enough to its contemporary audience to become a smash hit, and decades later the semi-historical glimpse it offers into a society hanging onto the ragged remains of a bygone way of life makes it utterly fascinating in hindsight.

And it’s still alternately sweet and funny by turns, as well, which makes it a great read in any era.