So whoever booked my flights to and from Rome decided it would be awesome to put me on a 6 a.m. flight back, and I was too dumb to bother checking the return flight info in time to say, “NOOOOOOO.” So there’s a car coming to pick me up from the hotel at 3:30, which is a little more than three hours from now. Junkets, man. Not as glamorous as you’d think. I didn’t even get to try Rome’s famous gelato while I was here.

I guess I’m going to skip sleeping for tonight. Not that I’ve had much luck sleeping anyway. Something I’ve noticed about foreign hotels is that they’re kind of terrible at air conditioning. So, even though the weather has been mild to cool while I’ve been here, my room has been consistently sweltering. This means America is better than the rest of world at driving and at chilling hotel rooms. I guess you’ve gotta excel at something, and if we can’t be tops at having a vital economy or sane politics or education or technological infrastructure or anything else, as least Americans are less likely to die on the road and sleep restlessly in muggy hotels. God bless the U.S.A., man. 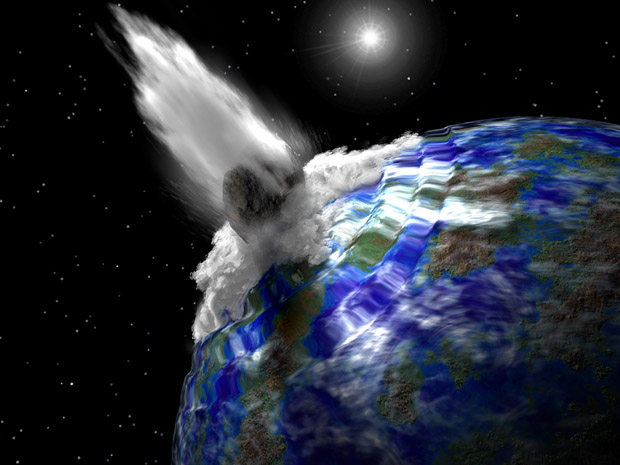 I’ve also been having absolutely terrible dreams. Those dreams so vivid you wake up in the middle of the night and rush to the Internet to make sure the world’s still there. Last night I dreamed my flight back home had to be grounded early and touch down on a highway because of air traffic safety concerns after a massive meteor smashed into Washington D.C. and wiped out the country’s entire political infrastructure. It wasn’t like the image above, which is the first thing that showed up in a Google search for “meteor destruction,” and by the way is completely amazing in the way it depicts the entire face of the earth — crust and oceans alike — as single, cohesive, deformable, fluidly elastic surface; I look at those ripples and crack up at the prospect of every living creature on the planet being flung into space at high velocity. No, instead I looked out the front window of the airplane from my seat (because in dreams airplanes are like busses) and noticed were were swerving to avoid crushing oncoming cars on a highway. Then I heard the copilot mention that for some reason the Michigan state government was serving as a de facto national government because Washington had been smashed in a meteor strike. My eyes snapped open and I had to remind myself that my Baltimore-based in-laws are currently vacationing in San Diego, so they were safe. Then I reminded myself that hey, idiot, it was just a stupid dream. Still, I couldn’t relax again until I walked over to my phone and checked Twitter to confirm that, no, this meteor didn’t really happen, and no, no one was lamenting the end of days.

Anyway, I had a late dinner and they served an espresso afterwards, so it’s not like I could sleep even if I wanted to. And they lived happily ever after.

Well, not really, but I couldn’t think of a better way to wrap this stupid blog post.