Not that you care, but: Mad Men

When I sink as much time into something as I have with Mad Men, I am compelled to write about it. However, I figure most of you don’t read this site for that, and so because I am a nice person I have placed my comments on the most recent episode behind a cut link. See you tomorrow.

The characters are by far the main draw of the show, so I shall comment on them.

Pete Campbell: It’s interesting that Campbell is still in many ways the sulky, entitled, rich kid he was back in the very first episode (“The world must look like one big brassiere strap just waiting to be snapped, huh?”). Yet in many others, he’s grown as much as anyone besides Peggy. He’s terrible at office politics, as demonstrated by his huffily calling the other partners in to squeeze onto his couch and demanding Roger’s office; heck, Don even stuck around a moment afterwards looking vaguely sympathetic, but Campbell still blew it. What’s different now is that he’s actually justified in his petulance. When he accused Roger of trying to stifle him last season, claiming that every new chip that came in diminished Sterling Cooper Draper Pryce’s dependence on Lucky Strike, it seemed like Pete’s usual blend of self-centeredness and delusional paranoia. But now that Lucky Strike is gone, it turns out he was dead-on: Roger is unabashedly attempting to poach his clients.

So we saw all sides of Pete in this episode: His callousness toward those he steps on en route to the top (“Where’s Harry?” “Who cares?”); his genuine work ethic; and the kernel of decency beneath his sliminess. Despite Campbell’s rottenness to his wife in the past — cheating on Trudy on the eve of their wedding (and after) only to give paramour Peggy the cold shoulder, and that ugliness with the neighbor’s au pair — he looks distinctly uncomfortable when his morning travel companion exhorts him to turn his back on his rocky new home life in the suburbs. Pete clearly misses city life, and he’s unsure how to deal with Trudy’s post-partum depression, but he seems to have genuinely turned a corner with his marriage. There’s hope for that little weasel after all.

Also, Campbell’s jacket at the birthday party was ah-may-zing. I could never wear something like that myself. The dude takes preppiness to incredible new levels. 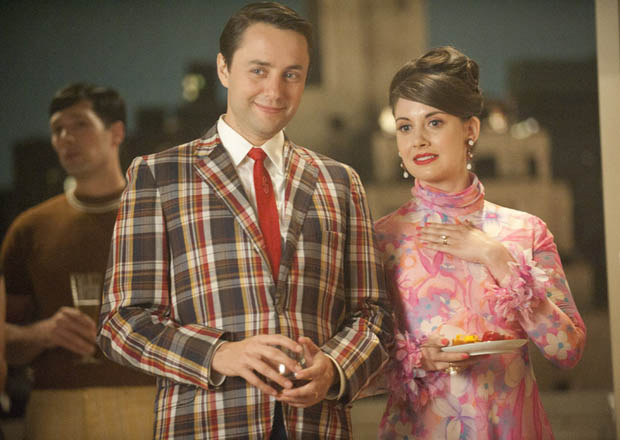 Peggy Olsen: It’s kind of hard to believe this is the same “mouse ears” from the first season, the sheltered Brooklyn girl who haltingly earned a tentative position on the firm’s writing staff. Her first real appearance is passive-aggressively shooting down her boss’ new wife’s attempt to improvise on a project. She shoves a pencil behind her ear and sits almost masculinely while wearing the closest a woman could reasonably get to men’s office wear in that era (a blocky white blouse and simple mid-length skirt). She gets high and chews out Don at his own birthday party, for crying out loud.

But the back half of the episode reminds us that, oh yes, it’s Peggy. She balks at holding Joan’s baby, still silently scarred from her own unwanted pregnancy. And when Megan criticizes her behavior at the party as an excuse to lament Don’s rejection afterwards, Peggy immediately gets the subtext of Megan’s complaint… then internalizes it. That Catholic guilt bubbling to the surface. Her immediate reaction is to assume she’s at fault for Don’s ill mood and Megan’s unhappiness, and she apologizes sincerely to both of them, unwittingly — or not; Megan seems pretty canny — facilitating the couple’s slightly off-putting reconciliation.

Her bean ad pitch deserved better, too. The concept was simply ahead of its time. By about 20 years. In the Mad Men “Where are they now?” post-script at the end of the series, I bet we’ll find out she was the one who created the California Raisins campaign.

Roger Sterling: Roger would be the single least useful character on the show if it weren’t for Betty. Instead, it’s a tie. Betty helped create Sally, who is increasingly awesome (if, uh, rather husky-voiced now). Roger is good at rejoinders and quips. That’s about all he’s good for now, and with Lucky Strike gone he brings nothing to SCDP besides his investment. For the first time in the series, Roger is actually giving hints of concern about his value and future. Of course, he’s doing this as sleazily as possible (namely, by trying to snipe Campbell’s accounts). Because he’s Roger. I still don’t know what to think about his blatant-yet-veiled admission of paternity to Joan’s baby, or the way he and his trophy wife already openly despise one another, or that fact that he’s far and away bound to be the biggest impediment to any real racial integration at the company. He’s hilarious, but if anyone needs to get hit by a runaway bus, it’s him. Seeing Pete’s brilliant comeuppance with the fake Coca-Cola appointment was one of the few times I’ve been genuinely proud of that baby-faced weasel.

Joan Harris: She turned out pretty normal for someone who grew up with that for a mother!

Bert Cooper: I guess Bert changed his mind about bailing on SCDP after Don’s anti-tobacco ad, since he was back in the office — though almost completely irrelevant. I think Cooper’s irrelevance is sort of the point, though. He represents an old guard whose perspective is increasingly moot. For every time he’s been right (supporting the Honda pitch), he’s been wrong half a dozen times — going all-in with Nixon over Kennedy because he thought the youth vote wouldn’t matter, for instance, and now by espousing the “domino effect” defense for the Vietnam war. It’s a shame the series is likely to end before Watergate, because I’d be curious to see his reaction to that particular turn of events.

Betty Francis: The former Mrs. Draper was nowhere to be seen, and I’m OK with that. My wife missed her, though, as she’s one of those rare people who empathizes with Betty because I’m a horrible husband 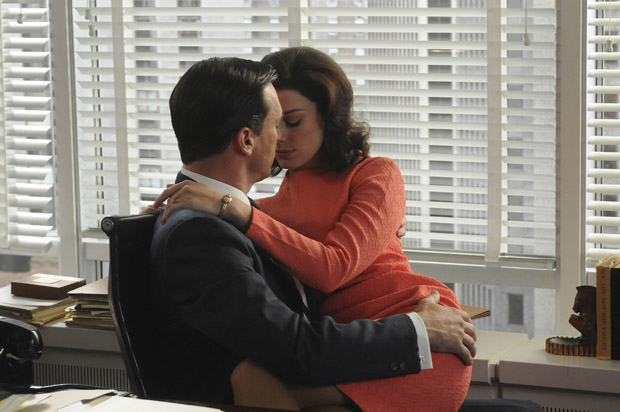 Don and Megan Draper: My feelings on this particular match-up are radically different after this episode than they were after the season four finale. When Don proposed to Megan on what seemed to be a whim and the episode closed with her sleeping contently while he stared uneasily out the window, it was hard not to see their relationship as Don trying to put a band-aid on his life and likely dragging some unsuspecting young thing down with him. Now, I’m not so sure. Megan has always been sharp, but now she’s clearly quite worldly as well. The question at the end of season four was, “Well, how long until Don cheats on her and screws this up, too?” Now I have the feeling that Don isn’t going to be the one to ruin things — or at least, not to be the one to commit the first infidelity, anyway.

Don is clearly hot for Megan’s body, but his attraction to her has a lot to do with his kids, too. I think that, despite his general unpleasantness on many levels, Don genuinely loves his children and wants the best for them, and he was drawn to Megan’s nurturing personality. (Not just the milkshake incident!) Maybe for the first time in the series, he actually has what it takes to be committed. Maybe he’s actually willing to settle down; but is she? He’s even told his new wife the truth about his identity at some point in the past.

Their makeup session after the party was fraught with all kinds of uncomfortable overtones of control and punishment and submission, so I have no idea where it will go. How will it go bad? Will it go bad?

SCDP’s first black employee: Who will it be? I foresee many tense moments ahead when one of the senior partners has been seen to dress up in blackface and sing about “darkies.”