You can’t un-watch the Watchmen

I’ve been seeing a lot of talk lately about Watchmen thanks to DC’s really dopey decision to create a bunch of spin-offs around the seminal graphic novel. Fans are raging, Alan Moore is patting himself on the back with indelicate vigor, and the whole thing is just ugly all around. Personally, I couldn’t care less. I refuse to believe that the majority of these comics could ever be worse than the film adaptation; on the contrary, by recruiting people like Darwin Cooke to work on the new material, DC is demonstrating at least some basic comprehension of what made Watchmen tick. (That was almost a pun.) Sure, that’s more or less negated by the fact that these spin-offs will exist at all, but a zero-sum result is still better than a deficit.

The movie is a deficit. I can’t begin to describe how terrible it was. 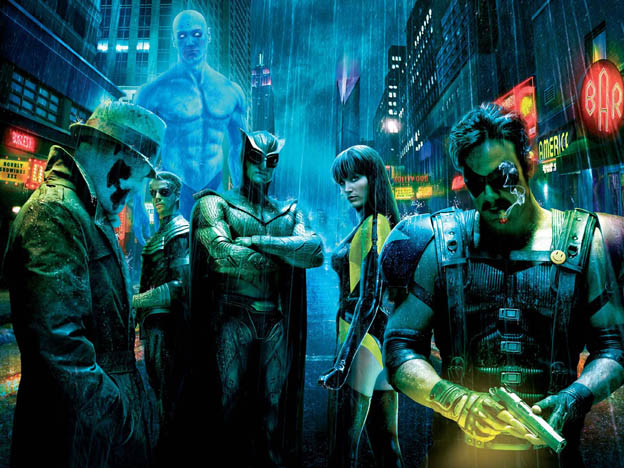 I am not an obsessive fan of the original graphic novel, but I do have immense respect for the intricate craftsmanship invested in the work — it’s surely no coincidence that clockwork factors heavily into a central character’s back story, among other places — and even more than that, an appreciation for the story’s underlying themes. What makes superheroes do what they do? it asked. It was, in many ways, the next step of the “Marvel realism” Lee, Kirby, Ditko, etc. pioneered in the ’60s; characters like Spider-man and the X-Men were driven to heroism by less-than-heroic circumstances, and Watchmen redrew the landscape from an even more realistic perspective. Suddenly the question became, are these characters really heroes at all?

By and large, Moore’s answer was to look down at them and whisper, “No,” as it were. Each character has personal reasons for going into masked vigilantism, but the underlying subtext is that they’re all kind of screwed up. Which makes sense. These are people who are fighting crime while dressed as patriotic harlequins, or as armored birds, or in their underwear, or while wearing the tattered remnants of a discarded Hypercolor dress. A great many of the masks suffer (or suffered) from sexual dysfunction, cruel misogyny, blatant gynophobia, or the shame of being homosexual in a not-yet-accepting society.

The movie offends because it completely fails to touch on this theme. On the contrary, Zach Snyder’s almost pornographic love of explicit slow-motion violence made a mockery of Watchmen. Violence in the graphic novel was a brutal, revolting thing — a means to an end, and almost entirely the province of the story’s most unhinged characters (e.g. Rorschach). There was never any glory or catharsis to violence in Moore’s text and staging, and certainly none to be found in Dave Gibbons’ almost clinically detached artwork. Case in point: Tens of thousands (if not more) lives are snuffed out in the final chapter as part of the ultimate “villainous” plan, whose sole aim is… to precipitate world peace through manipulative shock. And yet this almost-noble goal is revealed to be vanity on two levels: One, a callous act of murder by a man who thinks himself above human morality due to his elevated intellect, and two, an act committed in vain as a bumbling news clerk stands poised to stumble into the truth as the book closes.

Good luck finding any of that in the movie. Every act of violence is rendered glorious and exciting. Visceral. Punches land in slow motion, effluvia flies in thrilling sprays. The music pumps up the intensity of every bone-crunching blow. There’s never a second thought given to the purpose or morality of the fights: Fights is what action movies do, man! Snyder choreographed every frame of the film to adhere with slavish exactitude to the source material, and yet somehow despite his own clockwork replication of the surface and appearance of the original graphic novel, his movie absolutely failed to convey any understanding whatsoever of the actual point of the entire work. Watchmen the film elevates everything that Watchmen the book excoriates.

And that is why the movie is awful and, by comparison, the upcoming comics couldn’t possibly be all bad. The bar for derivative Watchmen works was well and truly lowered by Hollywood, and I can’t even begin to imagine how DC could do worse without reprinting Youngblood #1 as Watchmen Adventures and crossing out all the character names to replace them with “Nite Owl” and “Dr. Manhattan.” And even then… advantage Liefeld, I think.

17 thoughts on “You can’t un-watch the Watchmen”