Another great artist has passed away: French artist Jean Giruad, aka Moebius. Unlike, say, Ralph McQuarrie, I had only tangential familiarity with his work. French comics rarely make their way into America, so I mostly know his work through reputation, its influence on others, and disconnected images like the one below: 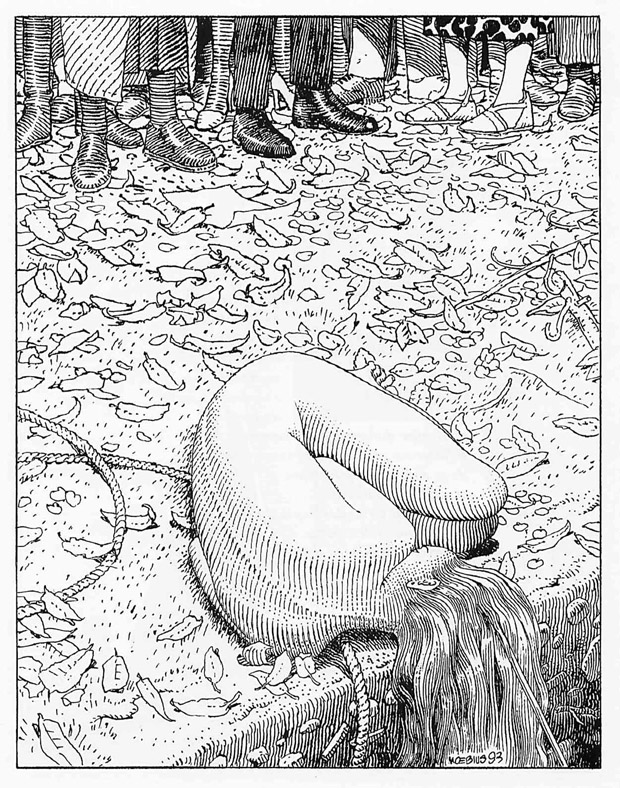 I don’t know the context or origin of this image, but it’s a gorgeous piece of art. Narrative, yet perfectly framed. It demonstrates Moebius’ extraordinary control over the pen, his ability to create shape and volume with a minimum of lines. His pen-and-paper artwork possessed the precision and evenness of a wood carving or lithograph, and his vision bordered on the surreal. Always evocative, always crisp, always beautiful. I could stare at the most trivial piece of throwaway art penned by Moebius and glean more meaning and wonder from it than from a portfolio of work by most other comic artists.

I’d be hard-pressed to overstate the breadth of the man’s reach and impact. The news of his death, for me, was bookended with a talk by the director of Gravity Rush yesterday and playing through a certain Mass Effect 3 mission today. The former touched on the influence of French bande dessinée on Gravity Rush’s visual style, and Moebius’ art in particular. The latter was a strange action sequence set in a virtual world that took blatant cues from Tron, lifting not only sound effects but the film’s entire visual style — a look crafted in large part by Moebius. Moebius was indirectly responsible for getting me into manga; he was a major influence in the work of Yukito Kishiro, and the bande dessinée-inspired Battle Angel Alita was my gateway into that particular medium. And so on, and so forth. Moebius was, arguably, to his country’s medium what Jack Kirby was to American comics and Osamu Tezuka was to manga.

Please stop taking away our creators. We’re running out of greats.