I always used to wonder if The Monkees’ Davy Jones would be buried at sea for the hilarity of Davy Jones resting in Davey Jones’ locker. That seems less hilarious at the moment, since Jones actually passed away today.

You kids probably don’t care, but I’m just old enough to be moved. I’m not old enough to remember The Monkees when they were together, but they were in heavy television syndication (leading up to a really misbegotten reunion album and the even more misbegotten New Monkees) when I was in elementary school and junior high, so I watched them a lot after school. Even back then I recognized the fact that they were a strange attempt to cash in on the popularity of the Beatles; Davy, I suppose, was meant to be the Paul proxy (i.e. the “cute” one). Mike was the faux John (the intellectual), Peter was the imitation Ringo (dopey looking), and Mickey was George, I guess (secretly the most talented one? I dunno). 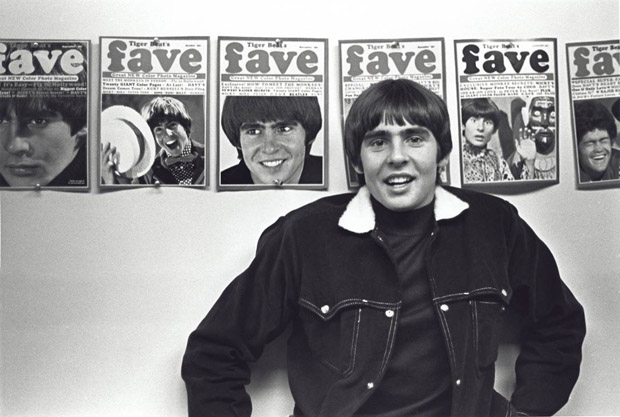 I suppose The Monkees were the first manufactured boy band, assembled for looks more than talent — though it turned out they actually did have varying degrees of musical talent and eventually pressured their record label to let them write and perform their own music. It’s like if 98 Degrees were actually Milli Vanilli but secretly were competent rockers.

There is, however, no excuse for those crazy striped pants Jones wore on occasion.

The Monkees weren’t essential listening or anything, but they produced (or were produced in) some lighthearted and enjoyable ’60s pop rock. And their TV show was amusing in a Batman-esque trying-too-hard sense. When I think of the show, I always remember this one specific episode where Jones walked into a music shop and said, “I am looking for a pair of red maracas,” which turned out to be a pass phrase for some Russian spies who then inducted the band into a hilarious comedy of errors. “Hilarious,” I mean.

I think I’m going to go listen to “Daydream Believer” now. Or maybe just watch that salad dressing commercial where they clearly wanted to license “Pleasant Valley Sunday” but couldn’t get the rights and ended up creating a ridiculously transparent fake version of the song.

Rest in peace, Mr. Jones, whether or not that resting place happens to be in the ocean.