I am not, generally speaking, a big fan of “Fred and Friends,” national purveyor of kitchy retro knick-knacks and such. But since their wares tend to overlap somewhat with my interests, I receive my fair share of Fred-branded goods. Sometimes, they manage to be great despite themselves: 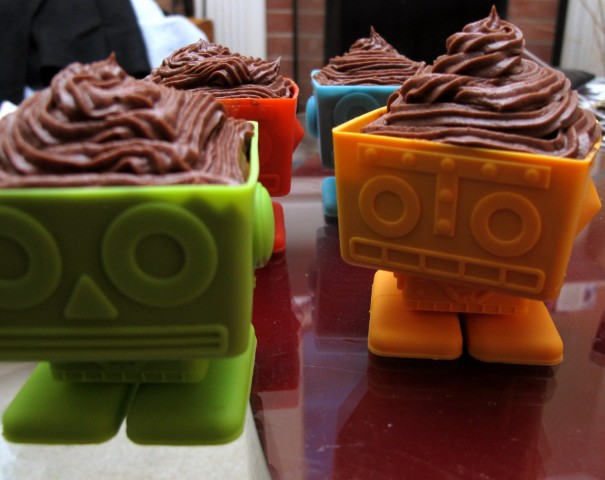 These are little silicone robots whose heads double as cupcake moulds. You pour the batter in, bake ’em, and end up with strange square cupcakes with robot faces imprinted on them. Or you can just frost the cupcakes while they’re still in the mould and end up with robots with what appear to be doo-wop band hairstyles.

In this case, Cat baked some a batch of vanilla sour cream cupcakes to which she added a hint of lemon zest and topped with chocolate cream cheese frosting. I didn’t take part in the production, so I can only report on the results; and no, sorry, I don’t know what recipe she used, but I do know she wiped out our supply of cake flour and confectioner’s sugar in the process. Report: These are the tastiest robots since C-3POs cereal. (Just kidding, they’re much better than that.)

Fake edit: Apparently it was this recipe, except we didn’t have a vanilla bean, which is where the lemon zest came into play as a substitute. And this was the frosting recipe.