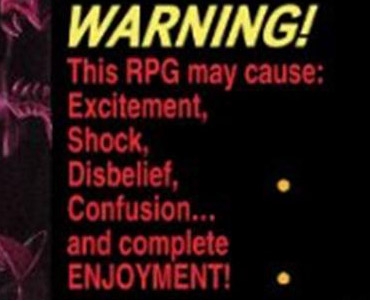 I have never played The 7th Saga. In fact, until I put together GameSpite Journal 10, I constantly got the game mixed up with Drakkhen. I don’t know why. I guess because they’re both Super NES RPGs and people hate them both. After reading Jake’s take on the game, I feel like I’ve really missed… well, nothing whatsoever. However, I am endlessly amused by the wild cognitive dissonance created by the wild contrast between our review of the game and its effusive box copy. My gaze always just slipped past these stupid little blurbs on Super NES boxes because they were a garish eyesore; now I’m wondering if they were all this absolutely preposterous. This might be the secret greatest untapped treasure trove of fascinating game-related nonsense ever.