Watches continue to be awesome; film at 11

I mentioned last week that watches are cool precisely because they’re uncool, and today I further confirmed this belief by having the Christmas gift my sister-in-law gave me adjusted to fit on my bony wrist at last: My new Phosphor e-ink watch. 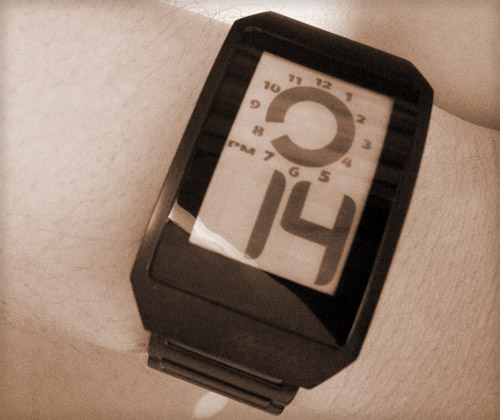 I’ve had this thing for two weeks now but wasn’t able to wear it until today, because the first one I received was slightly defective. The face is basically just a fancy LCD display, and it had a triangular patch of dead pixels right above where the 5 is and therefore, tragically, needed to be replaced. And since it’s a closed bracelet watch, I had to have some links removed before it would fit and not simply fly off and smash someone in the face any time I gestured with my left arm, which I didn’t have time to take care of until today. Fashion, man. It’s dangerous.

I was really drawn to this watch because it feels like the grown-up version of the digital watches kids my age wore as, uh, kids. If you’ve ever read The Hitchhiker’s Guide to the Galaxy, you’ll recall Douglas Adams seemed a little obsessed with digital watches. That’s because in the late ’70s, when the man was developing the series, digital watches were a fantastic new technological innovation. Gumpei Yokoi was so fascinated by them he turned them into portable video games. However, LCD watches of the late ’70s and early ’80s were kind of shoddy in retrospect, even the nicer metal ones like my father wore. It was worse for us kids; we ended up with cheap watches made of rubbery plastic (or, if we saved up a bit, a really cool Transformers watch that I would totally wear as an adult if I could find a working one again). Eventually, digital grew to be passé. Swatches became all the rage, and people like me were shown up by the rich kids who could afford to wear five or six Swatches on one arm at once; we rage-quit the art of watch-wearing in defeat.

Anyway, this one by Phosphor takes me back to those elementary school days in the same way that drinking creme de menthe and Kahlua is a fractured, adult version of buying Thin Mints from friends of the family who belonged to Girl Scouts. It’s a digital watch with an LCD face, but the LCD is technology closer to that of the Kindle’s screen, and the case and bracelet are black, ionized steel rather than cheap plastic. The overall design is sleek and stylish, and the face display is mutable; I like the circular hour/digital minute readout best, just because it’s more interesting than nothing but big numbers. And it beeps on the hour, which is charmingly quaint.

Anyway, long story short, I have really missed wearing watches, and it’s nice to be back in the habit.

I am idly wondering if should kick off a fashion category. I bet that would be the most efficient way to drive off the site’s few remaining readers!

12 thoughts on “Watches continue to be awesome; film at 11”