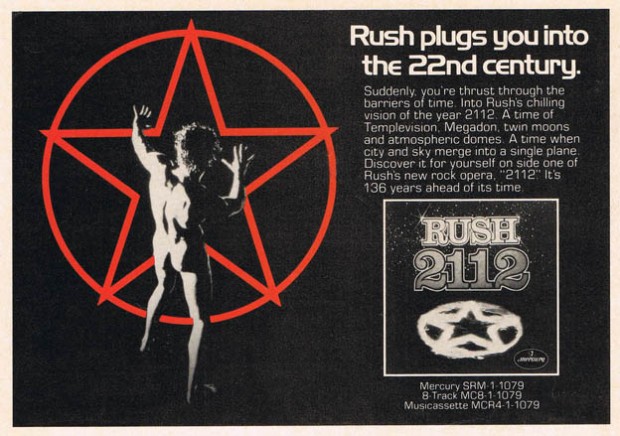 A future foretold through the prophetic medium of 8-track cassette.

2112 is considered a landmark album. It’s regarded with reverence by Rush fans. I kind of think it’s terrible. Don’t get me wrong, it has a handful of great tracks, and the condensed version of 2112 the band used to perform live (before Geddy Lee lost the ability to properly shriek and they lowered the register of the entire piece by half an octave) was a brilliant chunk of extended ’70s-vintage art rock. But as an album, it really bites the wax tadpole, if you know what I mean.

(If you know what I mean, please explain in the comments, because I’m not entirely sure myself.)

Part of the problem is that the entire second half of the album is pretty much contractual obligation filler. I dare you to find anyone out there who listens to side two of 2112 for any reason other than “Well, it’s on after the first half of the CD and it’s too much trouble to skip ahead.” The band overcame this particular failing with their two follow-up albums A Farewell to Kings and Hemispheres, whose reverse sides were as compelling as the epic obverses (if not moreso). 2112, on the other hand, has a couple of forgettable attempts at maudlin sentimentality, the obligatory Ayn Rand power-chord mantra in “Something for Nothing,” and “Passage to Bangkok,” which is about how it’s, like, way awesome to travel around Asia and get stoned, man. It even features a cheesy pentatonic riff of the sort you associate with AM radio commercials about the local “Oriental” restaurant.

So let’s ignore the flip side of 2112 the album and instead consider “2112” the grand epic. It’s a story of an oppressive future society run by the priests of the Temples of Syrinx, who quash all creative expression in the solar system in favor of conformity. The narrator stumbles onto a guitar in a cave behind a waterfall and teaches himself to play in the space of about 30 seconds. Amazed at how rad this thing called “music” can be, he presents his discovery to the priests, who tell him to get the hell back to work. This makes him very sad and he kills himself in despair. Then there’s a musical bit that apparently represents the long-departed “Elder Race” of humans returning from deep space and casting down the priests in order to liberate humanity, albeit a little too late for the narrator’s benefit.

Basically, if you skip the bits where the narrator teaches himself to play guitar and don’t pay any attention to the lyrics, it’s a fun, high-energy rock workout. If you make the mistake of listening to what’s being said, on the other hand, it’s a really bleak expression of everything that made the ’70s the ’70s.

But how accurate is it as a future? I have my doubts that we’ll be colonizing other planets any time soon, but I can certainly envision the “global oppression” part of the story coming true, especially if you replace “priests of Syrinx” with “captains of industry” (oh, how the irony must burn for Objectivist acolyte Neil Peart!). Sadly, the part about our benefactors returning from extragalactic space to save our earth-bacon seems pretty unlikely, unless there was a mass exodus via rocket no one bothered to tell us about during the days of the space race. Still, it might be a good idea for one of us to leave a guitar in a cave before we die… just in case.

I should have saved this write-up until tomorrow so it could be timestamped 21:12 on 2/1/12 (European notation), huh? Oh well.