The year I went analog again

As we count down the last few hours of the year, I am reminded of another way in which “marking time” and “2011” collided: It was the year in which I decided to start wearing watches again after something like… 15 years? This has provoked a surprising number of derisive remarks; people are perfectly content to use their cell phones to mark time and think I’m an idiot for taking what they see as a backward step. Fair enough, but in truth I decided to return to watches precisely because I’m tired of awkwardly fishing my iPhone out of my pocket while squeezed into a tight corner on the train or plane, or trying to operate my phone while wearing gloves in cold weather, and so on. I figured it would be a lot easier to simply glance down at my wrist. And I was right! It is. Also, a watch can look pretty nice. Apparently accessorizing an outfit is the key to looking like you actually paid attention to what you put on that morning. Who knew?

I decided to go in guns blazing to the land of timepieces by buying a Movado Museum, since they’re ultra high quality, retain their value, and sport a minimalist aesthetic that goes with practically any outfit (or at least any outfit I’m likely to wear in public, anyway; I’ve given up on the jeans-and-T-shirt look in order to reflect the fact that I am in fact an adult… only 15 years too late). I found a reasonably priced one online, and it was great! Unfortunately, my skin turned out to be allergic to the chemicals they use to treat the leather band, so I need to plunk down a big chunk of change for a hypoallergenic replacement band. Alas.

Stymied, I decided to diversify and find a few interesting watches I can swap around to keep things varied and minimize wrist-blistering. At the moment, this one is my favorite (the Projects “Reveal” watch, inspired by the New York Museum of Modern Art’s new building) since it turns time-telling into a bit of a puzzle: 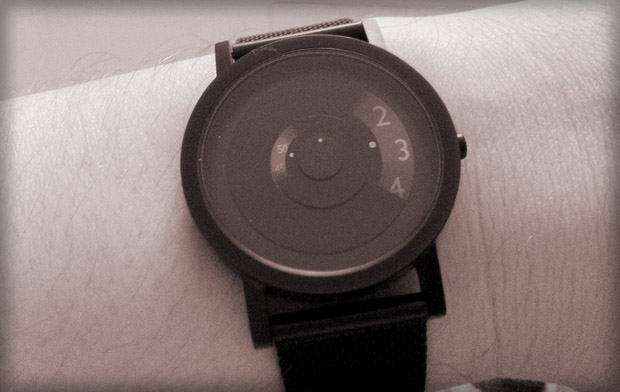 The idea of having to take an extra moment to parse the time may seem counter-intuitive, but it’s actually a big help for me. I have a bad habit of glancing at the time distractedly and forgetting what I just read a few seconds later, all goldfish-like. By being forced to stop and take a second or two to figure out what the heck the watch is telling me, I tend to remember it a lot longer. Work is its own reward!

I also like this particular timepiece because it’s small and has a low profile without being feminine. I have a skinny little wrist and most men’s watches look ridiculously oversized on me, so I always appreciate a watch that wasn’t designed for football players. I’m also a fan of the wrist strap, which is a hypoallergenic steel mesh — incredibly durable yet amazingly lightweight. The only thing that could make it better is if it were an automatic self-winding watch, simply because the idea of a watch that maintains its own time is in my opinion one of the most impressive feats of engineering in all of human history, but I guess we can’t have it all.

Anyway, watches are nice. I’m all in favor of using specialized gear that perform specific tasks well rather than leaning on all-around devices that do many things without quite as much elegance or effectiveness. I suppose that’s why I like gaming on handheld consoles more than phones, too. And using the Internet on computers rather than on phones. And so on, and so forth. Basically, I guess 2011 is the year I decided I don’t want my phone to do everything. Convenience only goes so far.

Coming in 2012: I begin killing and skinning animals, as well as growing cotton, to make my own clothes.

7 thoughts on “The year I went analog again”