I have a tendency to accumulate certain things without taking the time to enjoy them. Or rather, without having time to enjoy them… much as I’d like to be able to. One of my more regrettable obsessions — regrettable because of how much this stuff is going to weigh next time I move — is hardbound collections of classic comic strips. It all began with… was it Fantagraphics’ Complete Peanuts? Or maybe the Complete Far Side? Both showed up around the same time, shortly after I moved to San Francisco, and both were irresistible: Complete (or eventually complete in the case of Peanuts; after eight years, it’s up to about 1980, and Schulz died in, what, 1999? 2000?) collections of works that had massive impact on me as a kid. Peanuts practically taught me to read. So I’ve been accumulating them, as well as the complete Bloom County and Calvin & Hobbes to boot, but I haven’t had time to read them. 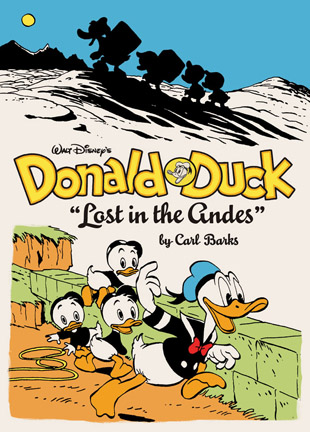 I’ve decided to change that beginning with my latest purchase. This one’s a little different, though. Rather than representing potent childhood memories, this latest endeavor represents something completely new to me — Carl Barks’ legendary run on the Donald Duck comic books, back when he was forced to sign his work as “Walt Disney” and was known to the public only as “the good artist.” So far one volume, Lost in the Andes, has been released. I picked it up and  (gasp!) read it straight away.

It has been interesting. I love — love — the production values on this thing. Fantagraphics prides itself on the quality of its publications, and this might be their best yet. The overall look of the book perfectly captures the spirit of vintage 1950s design and typography, yet both aspects still feel fresh and contemporary. That’s no mean feat! The artwork has all been reproduced from the original film, I guess, so the linework is crisp while the colors are vivid and clean (but they still possess the muted flatness of true classic color; no Photoshop gradients here — but no screen tone moire, either).

The comics are fun, too, but honestly it’s the care put into reproducing them that mostly appeals to me. After all the praise and reverence Barks receives from the genuflecting masses, I guess I was geared up for something with a little more gravity. There’s no question that Barks was a fantastic illustrator and incorporated some impressively sophisticated jokes and highbrow references into his work, and that’s awesome. Disney comics must have been read by millions of kids, and here was someone lavishing them with fast-paced stories that made smart jokes and never talked down to the reader. I guess I just had my heart set on something more epic.

That’s no fault of the comics, of course. Barks could have phoned in a workmanlike performance, but he obviously poured his heart into crafting inventive stories for kids. Nah, I blame the comic historians who put him on maybe a little too high a pedestal. Nothing wrong with hero worship, but the essays and notes at the back of this very book perfectly embody the problem: They read like high school literary essays, enthusiastically assigning authorial intent and subtextual meaning to some funny comics about talking ducks. The essayists do that annoying thing where they concede that the author of the original works has openly said there was no deeper meaning to his work and then casually ignore his statements and praise him for his subconscious literary genius in a way that probably would have made Barks feel uncomfortable, based on what I’ve read about him. Sometimes a duck swimming in money is just a duck swimming in money, guys.

They’re also quick to whitewash — if you’ll pardon the expression — the frequent racist caricatures that dot these works. Lots of unflattering aboriginals here; of course, that was simply the nature of the times in which these comics were created, and that sort of thing is an unavoidable fact of life in works that predate the civil rights movement. But there are a few too many apologies here, a quickness to say, “Yes, lots of ugly stereotypes, but under the blackface those were actually the best characters in the story!” It seems a bit too disingenuous for my liking. I can’t blame a man for being a product of his times… but I don’t think trying to present the more unfortunate side of his otherwise great legacy as some kind of artful subversion of racism does anyone any favors.

So I guess what I’m saying is, the comics are a lot of fun. The presentation quality is glorious. And the commentary surrounding the comics will probably make you want to rip out the pages, Donald-like, and chew comically on a handful of pages while jumping violently up and down on the rest. As for me, I’m looking forward to the next book, which focuses on Uncle Scrooge… but next time, I’ll probably skip the essays. 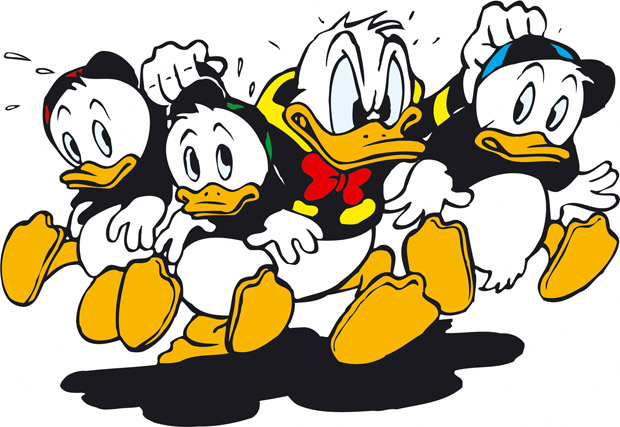