Time for a Trek Trek update. Sorry! I’ll be condensing multiple episodes into single posts (with occasional posts for extremely notable shows), if that helps. I finished up “Broken Bow,” and then I left town for a week. I’m back, however, which means I’m back on the elliptical sweating off my New York City food baby (whose conception was so well-documented here), which means I’m watching more Enterprise. Since my return, I’ve tackled episodes three and four, “Fight or Flight” and “Strange New World.” 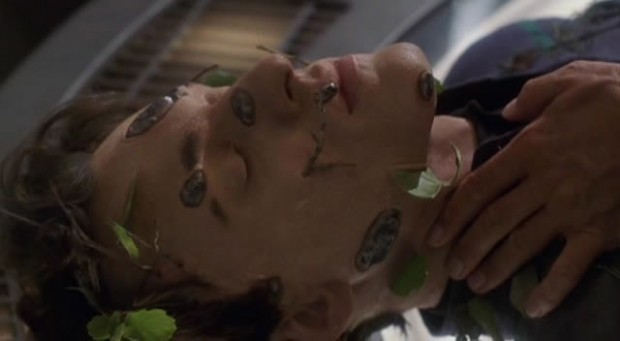 Both these episodes are early enough in the series that their primary function is to further establish the premise and characters laid down in the pilot. That makes sense, but less intuitive is that for the very first post-pilot episode the producers decided to focus on a totally secondary character, linguist Hoshi Sato, rather than fleshing out the command crew first. I don’t think it was necessarily a bad idea, as Sato’s inexperience and uncertainty about venturing into deep space gives Enterprise a different flavor than previous Trek series; the fact that she’s strictly on-board as a technical specialist and finds the idea of beaming down to watch redshirts die each week terrifying makes her unique in the franchise. It also makes most fans hate her guts, but I’m sympathetic. If I were dragged along on a mission like that (“We need you to tell alien races about the history of video games”) I’d be pretty leery of throwing myself into harm’s way as well. “Fight or Flight”‘s parallel symbolic narrative is a little too tidy and not especially flattering — Hoshi, you are the slug! — and of course it’s hardly surprising that she learns to love her lot in life when only her golden ear can save the ship from being destroyed a week into its historic mission, but that’s episodic TV for you.

The other thing that these episodes establish is that humans are kind of dicks and probably don’t deserve to be exploring space on their own. One of the basic premises of Enterprise is that Vulcans have a sort of patronizing relationship with humanity, and now that humans have figured out how to travel at 200 times the speed of light they’re ready to shed their shackles and soar through the galaxy. In these episodes, that ambition takes the form of the crew going, “Hyuck, y’all Vulcans can’t tell us what to do!” and then promptly regretting it. Well, no, actually, they don’t regret it. In “Strange New World,” designated Vulcan soccer-mom T’Pol recommends the crew take a little time to study a newly discovered planet before beaming down, which advice is promptly ignored and nearly ends up killing everyone on the away team. This does tie in to the interesting narrative device of transporters being extremely unreliable; the dude in the image above was beamed up in a wind storm emergency and the system wasn’t advanced enough to tell which bits were his and which bits were debris being blown in the wind. Gruesome! But eventually the day is saved, and everyone goes away happy; yet at no point do the reckless human crew say, “Whoops, our space-bad,” or, “Hey T’Pol, guess you were right and this entire affair could have been avoided easily with even a modicum of professionalism and caution!”

With luck, the next episode will involve the command crew dying horribly and Sato taking the conn so that she and T’Pol can prudently and sensibly explore the galaxy. Oh, OK, Porthos the beagle can live, too. He’s just a pwecious wittwe puppy, yes ee is. Best character on the show so far.