I had dinner the other night at Fort Defiance, the restaurant in the Red Hook area of Brooklyn where I discovered the Phony Negroni last year. It’s a cozy little place in a rapidly blossoming neighborhood full of genuine hipsters. Not the “video gamer on the Internet” definition of hipster, which basically means “anyone who puts more than two seconds of thought into what they wear and have buttons on their shirts rather than video game logos.” No, real hipsters. The wild, uninhibited kind. I mean, I saw people driving El Caminos ironically. That’s the real deal right there.

I learned two things at Fort Defiance this year. First, the iPhone’s camera may do HDR, but it still sucks for shooting food under low lighting conditions. 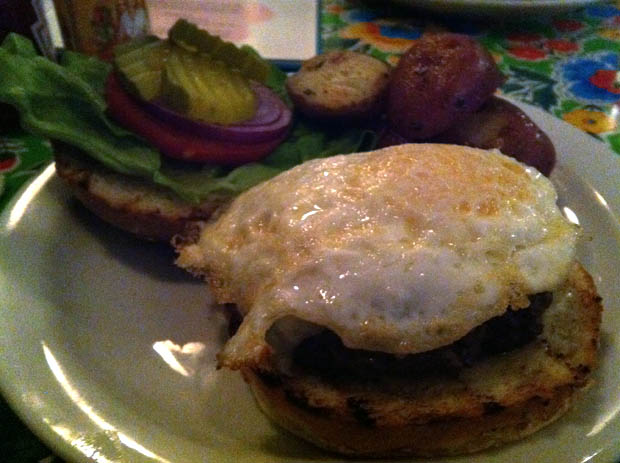 Secondly, provolone cheese and fried eggs don’t make for a great burger. Individually, either one would be awesome on a burger, but together they’re just not balanced right. A fried egg always has that little hint of sulfur lingering around the edges, a subtle flavor that needs to be counteracted with something sharper. Provolone hits your tastebuds at the same place as egg, amplifying the earth undertones of each and bringing that aspect of their flavors to the front. It wasn’t a bad burger, but I should have used a sharper cheese (swiss, maybe, or cheddar) to complement the egg. Well, live and learn.

Despite my own build-a-burger failure, I highly recommend Fort Defiance. If you ever happen to be in Red Hook (perhaps to take lessons on cultivating an ironic mustache) , you should stop by for their Monday night burger deal — ten bucks for a custom burger and roasted potatoes. That’s a decent price for a really good burger in New York, but it gets better when you add a two dollar Tom Collins (or beer, if you must). Thumbs up. Just don’t build a sulfur burger like I did. With unlimited freedom comes unlimited potential for failure. Remember that, my young apprentice.

5 thoughts on “BakeSpite: Back to Defiance”