So, hey. I’m covering New York Comic-Con this weekend, which means I can’t really blog much here. At least, not about video games. But I can sure write about food, because I can’t imagine that flying on 1UP. You know?

Cat insisted that for my first night here — actually our first night here, kind of; when she learned I was going to NYC, she booked her own simultaneous vacation out of sheer jealousy and will be here in the same city as me, though not actually doing anything with me so she can hang out with friends while I work for a solid weekend — for my first night here, I go to one of her old favorite haunts: La Bonne Soupe, a French (obviously) bistro in midtown. I guess it’s pretty reasonably priced for something that isn’t fast food in NYC, as a hamburger with fries — sorry, I mean, steak haché aux pomme frites —  is less than $15. (I love this city, but I’m not so crazy about the pricing.) And, fortunately, it is very tasty. I had the steak haché a poivre, despite not being much for red meat, and I did not regret a bite of it.

Someone also ordered escargot for the table, and that was super tasty as well. I’ve had some pretty bad escargot in my time, but this was excellent. Probably because each snail was cooked while completely immersed in garlic and butter. Yes, yes, French cuisine, I’ve figured out your “secret,” and that secret is beaucoup beurre. 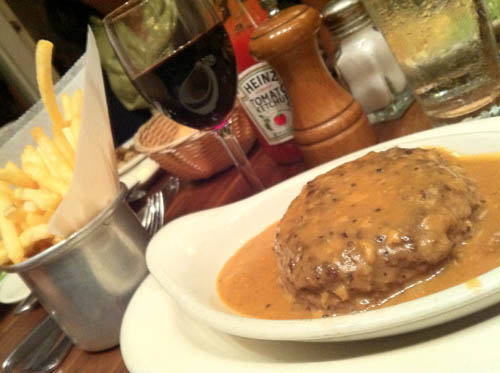 Here is another secret: Brown sauces never, ever photograph well. Doesn’t this look nasty? But it was delicious! This place does hamburgers Hamburg steak style, just meat with sauce, and the sauce in question here is made with cream, cognac, and peppercorns. The fries were super-crispy, which means probably double-fried and double-fatty. And the wine was surprisingly decent for a wine at a New York restaurant; unlike pretty much any other wine I’ve ever had at a restaurant here without diving into the “second mortgage” section of the wine list, it tasted of fruit rather than vinegar.

In short, a success. And a nice change of pace after a day of airport food.

Tomorrow: sad lamentations about the fact that there is no decent food within a half-mile of the Javits Center.