I was recently at Tokyo Game Show. You know what that means, right? Yep: More strange Kit-Kats from abroad. 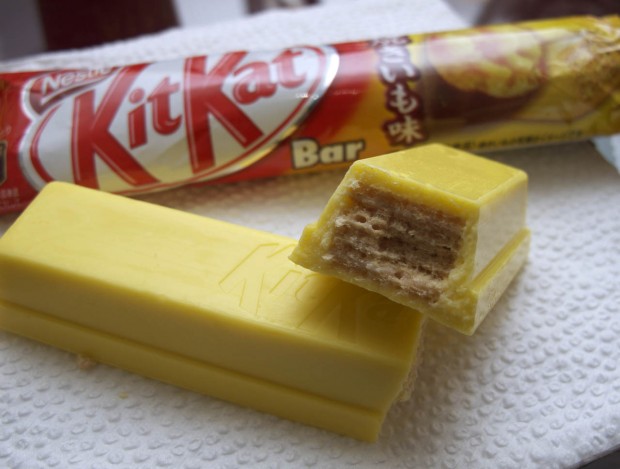 Daigaku imo flavor Kit-Kat is one of those things that makes me realize I really don’t understand Japan on, like, a genetic level. Who over there thought it would be a good idea to make a candy bar that tastes like potato? It’s not like those zany Thanksgiving Jones Soda packs where they make soda that tastes entirely like savory foods; instead, it’s basically a white chocolate Kit-Kat that’s been bizarrely modified to also be sort of rich and savory. It’s really not especially tasty.

As often happens with these oversized chunky-style Kit-Kats, its problems are compounded by its size: The freakishly mutated white chocolate is really thick around the lower portion, so the sickly savory-sweetness assaults your tastebuds like the forced goose-step march of an army made entirely of gross.

Anyway, I don’t recommend this one. Unless you’re Japanese, in which case you might enjoy it? I don’t know. Japanese cuisine is mostly delicious, but they do occasionally give us things that throw the human tongue for a loop. This isn’t, you know, natto or anything, but still… advance with caution.