Make it so high-resolution 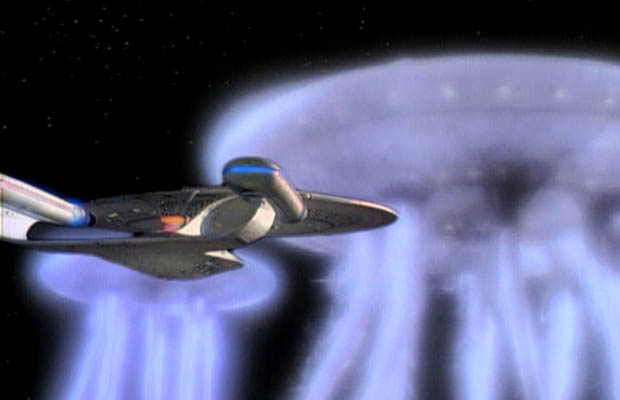 A couple of months ago, I had a great idea for a blog series: “Trek Trek,” wherein I would watch the entirety of Star Trek — as in, all of Star Trek, meaning every series, including the danged cartoon — and critique/praise/mock the shows. This became a bit less inspired a couple of weeks later when Netflix started streaming all Trek episodes and the series instantly transformed into something of a commodity, but whatever. I’d already committed by ordering sets of the complete Next Generation and — yes — Enterprise to go along with the Blu-rays of the original series. “Might as well get them on DVD,” I figured. “The Next Generation probably won’t ever come to Blu-ray, because Paramount composited all the special effects for 480i broadcasts and it would look terrible in high-definition.”

Naturally, they’ve gone and made a liar of me by announcing Blu-rays of the series, featuring completely re-shot and re-rendered effects. So not only did I fling my money away, I did it on a decidedly inferior rendition of the series! I have a feeling the redone F/X aren’t going to resemble cheap Video Toaster overlays (honestly, TNG‘s visuals looked pretty bad even to my young eyes in 1987). Maybe they’ll also Photoshop in some dignity for Counselor Troi, too!

This is kind of annoying, but it also makes me a little happy that my video game curse has transcended its original medium. I still intend to go through with my madness, though. I have a plan. I’m going to watch Trek in chronological sequence, meaning I get through Enterprise right away. And rather than end on the reputedly sour note that is Voyager, I’m going to get to the point in Deep Space Nine at which Voyager is spun off, work through Voyager, then wrap it up with the rest of Deep Space Nine. Then, bam! Trek ’09. Or maybe Trek Online. Whatevs!

I realize I’m overthinking it, but 50 minutes on the elliptical every night gets pretty boring, and these videos will be my lifeline for… like… two years? Good lord.

Yeah, let’s do this. High-definition or not.

22 thoughts on “Make it so high-resolution”