Break my heart in two 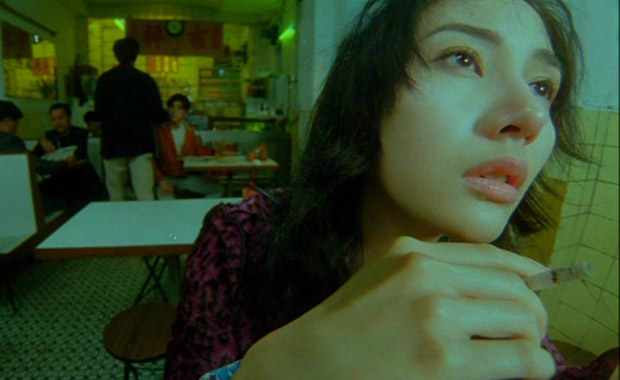 A forumgoer’s oblique reference to going mute after eating expired pineapple prompted me to hunt down a copy of Wong Kar-Wai’s Fallen Angels and watch it again. I love this movie. I don’t think I’d call it a classic or a masterpiece, but it exudes an air of effortless cool that so few works manage to capture. I’m not sure if that’s because Wong Kar-Wai is simply that good, or if perhaps he really wasn’t making an effort to be cool. Maybe the secret is that the movie is so understated. Or maybe that it’s so effective at setting mood and evoking emotions.

Watching the movie again for the first time in a decade or so made me wonder why people are so concerned about seeing “the Citizen Kane of video games” when I’d be much more interested in “the Fallen Angel of video games.” Citizen Kane was a powerful film to be sure sure, and it tells a grand tale. But Fallen Angels is almost abstract with its disjointed structure, a patchwork of vignettes that range across the emotional spectrum. The movie could best be described as “cryptic,” moving through the diffidence of a hit man’s life; the surreality of a voiceless man who lives with his aging father and makes a “career” out of breaking into storefronts after hours and forcing people to suffer his aggressive customer service; the longing of the hit man’s unseen partner who moves through the empty spaces in his life consumed with unrequited lust for him; the ridiculousness of the mute’s obsession with an equally obsessive woman; and, ultimately, the emptiness of each of these lives. Fallen Angels can be downright goofy at times, but it’s never laugh-out-loud funny, and even at its most preposterous (e.g. the Blondie brawl) it’s tinged with an air of sadness. No one in this movie lives a life of fulfillment, and your heart aches for them.

Fallen Angels makes me wonder what it would take for a game to be equally evocative. Or if in fact a game can be evocative on this level. Fallen Angels looks a lot like a modern video game, with its rain-sodden nocturnal cityscapes filmed in desaturated color. The hit man’s contact dresses constantly in black leather or red vinyl, while the camera adopts strange angles and jittery time-lapse effects that make the rare action sequences feel almost disconnected and unreal. Yet unlike a game, much of what makes Fallen Angels work is that the viewer feels so helpless throughout the story; it’s a tale of bleak lives spinning out of control, and in all but the rarest of situations (such as BioShock‘s climactic confrontation with Andrew Ryan) a game strips the player of control to its own detriment.

OK, but seriously, I’ve yet to encounter a game that manages to be genuinely cool in the way Fallen Angels does. Directors like Goichi Suda and Hideo Kojima — talented as they may be — seem to try a little too hard, stumbling right past Wong Kar-Wai’s seemingly unaffected air of indifference to a state of conspicuous effort. Games like No More Heroes and Metal Gear Solid cry out, “Look how awesome I am! This character is badass, and he is you! You are badass!” Fallen Angels, like Chungking Express before it, doesn’t linger on its characters’ posturing, because they don’t posture to begin with. They’re awkward, lonely, imperfect, doomed. They’re deeply flawed and can only hope for a moment’s happiness, and even the one “cool” character — the hit man, Leon — isn’t particularly good at what he does. He’s a self-admittedly lazy man. The longest shot in the film is of the mute childishly drinking in the proximity of the woman he’s in love with as she gazes into the distance, unaware and uninterested in his presence. When they meet again, a few months later after he’s lost his father, she doesn’t remember him at all. It’s a movie that hurts more the more you think about it.

Maybe it’s foolish for me to even want something like this. What I’ve just described is essentially the opposite of what games exist to do — they are meant to empower players, to make them feel skillful, to cast them as heroes or otherwise put them in control. Movies are good at certain things; games are good at others. Will the twain ever meet? Can it? Should it? It sounds good on paper, but I wonder.

21 thoughts on “Break my heart in two”