No, no, that’s not quite right.

Anyway, I’ve mentioned this before but never in any real detail: Something horrible has happened to me over the past year or two. Somehow, my dearly beloved wife tricked me into caring about clothing and fashion and stuff. I never wanted this to happen, but she wore down my defenses by subjecting me to shows like “What Not To Wear” and “Project Runway” and using subtle feminine wiles to make me self-conscious about the fact that I was a grown man wearing video game T-shirts to work (though in my defense, that’s pretty much a mandatory uniform in the industry I work in). The final blow to my resistance came last Thanksgiving when we stopped in a hat store near Nolita.

“I could never wear a hat,” I said. “That’s just stupid.” Then she put this one hat on me and both she and her brother agreed it was perfect. And it kind of was. But I also realized that if I wore a nice hat with jeans and a video game T-shirt I’d be deplorable, so I promptly commenced completely replacing my wardrobe with nice clothes. Is it weird to completely change your entire closet around a single accessory? Probably, but I suppose the hat was really just the final echo that set loose an avalanche. Also, it helps that I live a few blocks away from the world’s most amazing Goodwill, where well-to-do Chinese doctors retire their very nice designer-label clothing after a season of light wear, and I can buy well-made, well-kept garments for like three bucks apiece. It’s kind of ridiculous.

Of course, the real reason I like the hat is because my bald spot has grown awfully large in the past couple of years.

Anyway, if you’d told me a year ago that I’d be pretty happy when Cat got this for me: 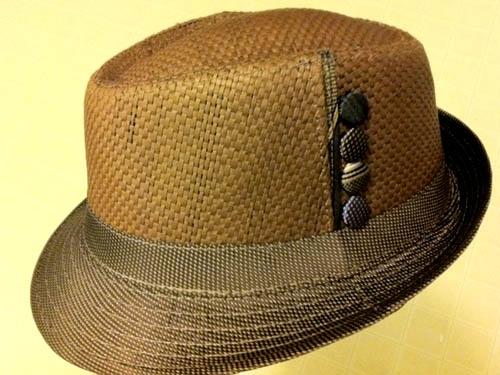 …I’d have called you a damn liar. Now, though, I’m like, “Hey, that’s a pretty interesting hat.” Worse, I wear ties to work. Voluntarily! With nice jackets and sometimes slacks! I don’t understand what I have become.

But, on the plus side, you can’t see my bald spot anymore. So that’s something.

30 thoughts on “Haberdashing through the… snow?”