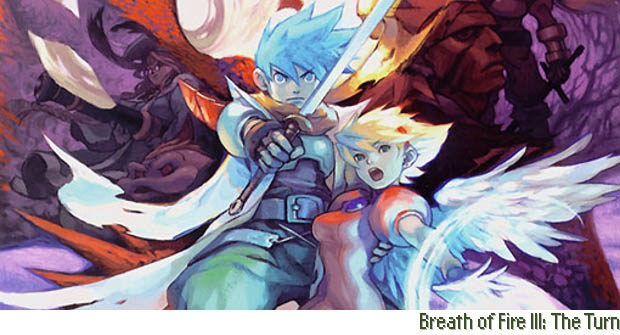 I’m not going to lie: Breath of Fire III may well be the first game I ever resented. I had somewhat enjoyed the original Breath of Fire (enough to rent it, not quite enough to finish it), and I picked up III at launch, flush with affection for RPGs in the heady days immediately following Chrono Trigger, Suikoden, Final Fantasy VII, SaGa Frontier, and Final Fantasy Tactics, looking forward to another great story amidst challenging combat in a vast world. And it never arrived. I reached the end of the game, some 60-odd hours in, and it just kind of fizzled out. This struck me as a pretty hefty investment of time for no real payoff, and I didn’t appreciate being jerked around like that.

Later that year, I played Xenogears and gained a sense of perspective. But still, for a while, I was pretty miffed at Breath of Fire III.

This effusive retrospective by Philip Armstrong makes me feel pretty guilty about that. I don’t think I’d necessarily enjoy Breath of Fire III any more if I played it again today, but at least now I see what they were angling for with the game. The ability to make me change my mind about an opinion I’ve held for more than a decade? That’s quite the mutant superpower, Mr. Armstrong.

Yes, I know about your secret identity… Loki.